The 29th Atlantic Rally for Cruisers (ARC) wrapped up for another year on Saturday night (20th December) with the traditional prize-giving party in Rodney Bay, Saint Lucia. Over 1,000 ARC sailors, their friends and families celebrated the safe and successful Atlantic crossing by more than 220 boats. The spirit of the ARC is the spirit of camaraderie and adventure, which makes every one of the 1,250 ARC sailors a winner, not just those on stage to receive awards.

The evening, held at a new venue for 2014 at Beausejour Cricket Ground, provided a rousing end to the annual ARC rally, and a chance to recognise the achievements of the fastest and slowest, the oldest and youngest, and the couples and families that are so much a part of this cruising classic.

Selene's crew were recognized for the difficult feat of being the first boat across the finishing line with only two crew, and received the Double-Handed award. To emphasize that the ARC is as much about having a good time with new friends as it is about fast sailing, the young Swedish crew of Thalassa were awarded the Arch Marez Memorial Trophy for the best party boat. The Oldest Skipper went to Manfred on Albatros, certainly a deserving winner as he's now completed more ARC rallies than anyone else. The Youngest Skipper award, went to 21 year old Nicola Henderson on Hot Stuff, the only all-female crew this year. 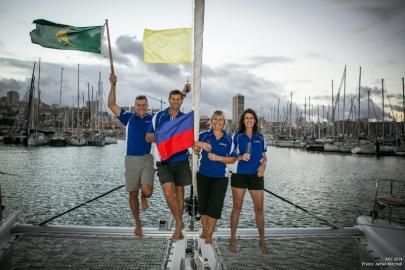 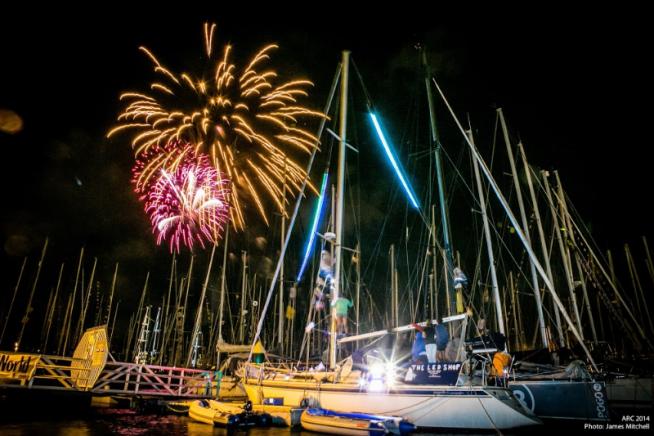 Leopard by Finland was recognized for their record-breaking win in Racing Class A. They were narrowly edged out on corrected time for the Racing Division Overall by regular ARC entrant Scarlet Oyster, who corrected less than an hour faster than Leopard.

The Spirit of the ARC award was, as always was saved for last. This unique trophy is awarded annually to the yacht crew that best displays the spirit of goodwill and enthusiasm which the ARC creates amongst the fleet.

Thanks to their overall enthusiasm, ingenuity at sea, and aggressive sailing despite having young children onboard, the Spirit trophy went to the Swedish yacht Take Off this year.