You’ve witnessed it, or maybe even experienced it firsthand: boat approaching dock, wife on the foredeck with line in hand as her white-knuckled hubby grips the helm. Things are not quite going according to plan. The sickening sound of fiberglass meeting an immovable object. Then, loud recriminations about who did or didn’t do what.

My wife Noi and I would never claim to be models of shipboard calm and reserve. Indeed, we have had our share of heated arguments since leaving the Chesapeake aboard Symbiosis back in October 2015. But in our travels we’ve encountered several couples that do better than others at getting past these tense moments. We spoke to three such couples holed up for hurricane season in Grenada. 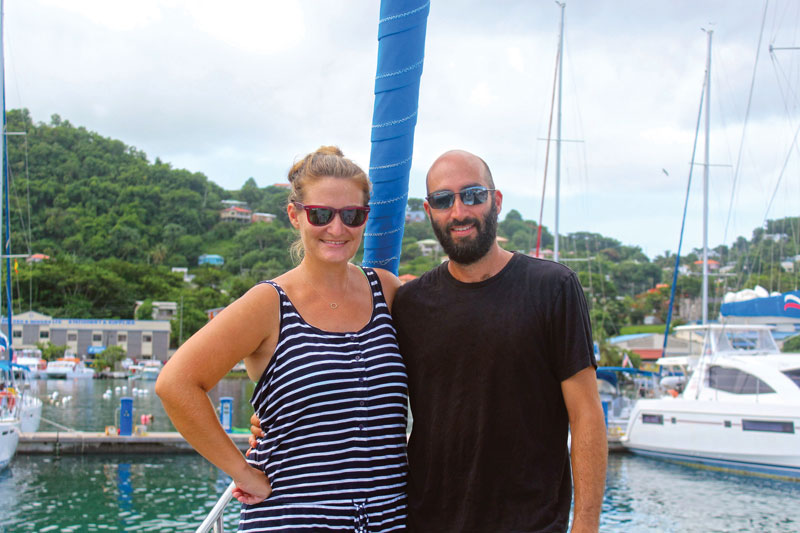 “The whole thing is like a weird science experiment,” Lauren Weisenthal muses about extended cruising. “After all, couples don’t usually get to spend 24/7 solving problems together.”

Lauren, 37, and her husband Brian, 35, are native New Yorkers who have been married a mere five years. Before deciding to go cruising aboard their Whitby 42 Nightingale Tune, Lauren worked as a chef in Manhattan and in the corporate world at Etsy. Brian was the CTO at a software firm he co-founded. They decided to learn to sail together. “We did get into some pretty scary situations, and we worked together to get out of them. And we did that really early in our learning, so we got confidence as a team,” Brian recalls.

Larry Gaddy set off three years ago with his wife Debbie from the San Francisco Bay area and now they cruise on Tropical Blend, their Nordhaven 43 trawler. Larry acknowledges that the lack of personal space can be a source of tension. “We’ve been married 21 years. We went from both having jobs… to suddenly 24/7 in a very small space,” he says. “That’s tough to do for anybody.” 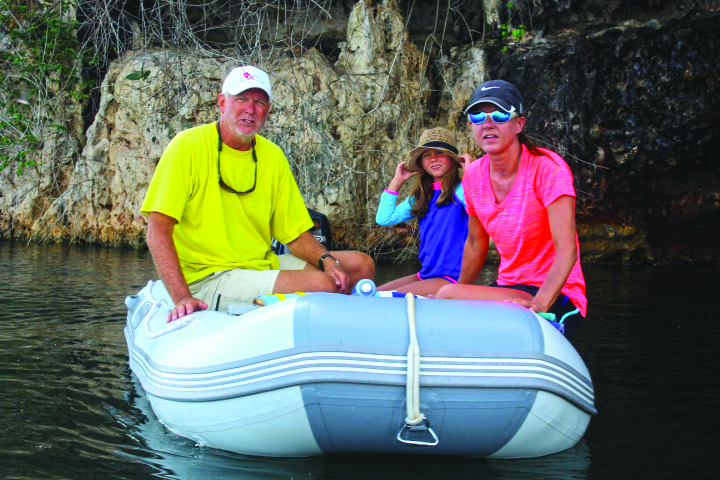 For Ken and Danielle Jones, 59 and 44 respectively, as well as their eight-year-old daughter Kaylee, elbow room hasn’t been an issue aboard Aqua Vida, the family’s Catalina 36. The couple from Tallahassee, FL, met on the job and worked together for years before eventually casting off the dock lines in 2013. Still, they occasionally need their distance, notes Danielle. “It’s more like wanting time alone on the boat to not have somebody in my way so that I can get things done. And the same thing goes when he’s doing a big project.”

Duties aboard the three boats tend to fall more or less into the traditional gender roles. The men are the navigators and mechanics; the women keep things clean and organized. On Tropical Blend and Aqua Vida, however, Larry and Ken respectively also do the cooking, much as they did before cruising.

In fact, for all the couples interviewed, the breakdown of duties on the boat closely matches how they worked shoreside. Lauren, however, is an exception. “I love planning, I love provisioning, I love cooking, because that all comes very naturally to me.” But, having always had hired help to clean the couple’s Manhattan apartment, it’s a job that Lauren says she “resents.” Brian chimes in, “And I’m not allowed to do it, because I’m not very good at it.” 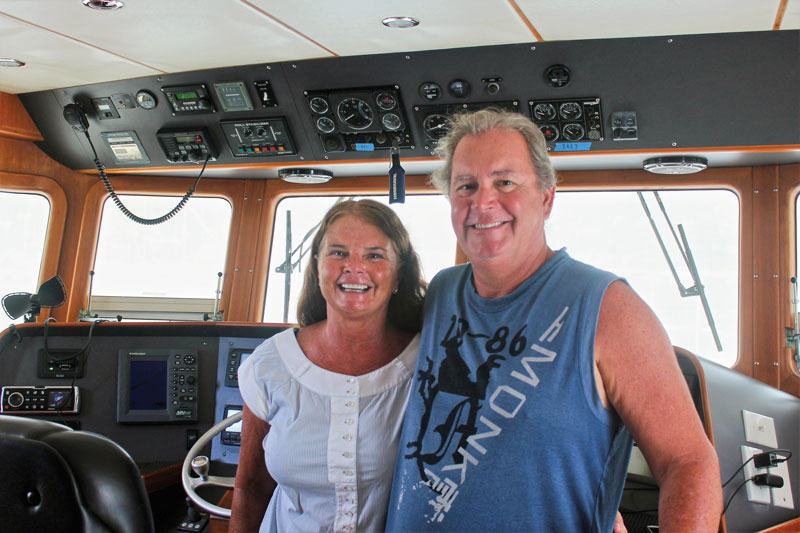 The main theme expressed by couples on all three boats is that feeling comfortable with a situation, regardless of what it is, is paramount, even if the husband and wife don’t always see eye to eye.

“We often have situations where [Debbie] thinks we’re too close to something,” says Larry, “and I look at the chart and think we’re fine. But it’s how she feels. Does it really kill me to go another quarter-mile off of it? No, so I do that. I used to argue with her and say, ‘No, you’re wrong; we’re just fine.’ I don’t do that anymore.”

Brian agrees: “You both have to be comfortable, or else no one is going to be comfortable. If she’s not feeling safe about the anchorage or the way we’ve anchored, then I’m just going to feel that I can’t relax.”

It goes to an axiom that Larry has developed: “It’s a hard lesson, but on a boat, you can’t fight just to be right.”

Establishing a mutual comfort level starts in the planning stages, says Ken. While he looks at the weather and sketches out a route, Danielle acts as “the voice of reason.” When they sit down to discuss plans, “she has a great sense of what’s practical and realistic,” he says.

Rules also help in establishing comfort for both partners. On Nightingale Tune, for instance, there is an ironclad rule that no one goes forward without a lifejacket, tether, and the other person keeping an eye on them from the cockpit. And along with Tropical Blend, there’s a “no peeing off the deck” rule for the men. It’s simply too easy to go overboard in an embarrassing (not to mention life-threatening) manner.

Debbie, who worked as a nurse before retiring, is all about safety. “I don’t ever put anything above it,” she declares, adding that she and Larry also have a rule that “the engine-room door stays open if anyone goes down there while we are underway. In case someone would get injured, they could be heard. That would be impossible if the door was closed.”

Has the experience of cruising fundamentally changed these relationships?
“Definitely,” Lauren answers. She and Brian have been discussing the idea of starting a business together after cruising. “I’m not sure we could have gone from our normal land jobs directly to that,” she says. “This break has been really good for us. It’s taught us how to communicate and solve problems together and understand each other’s strengths. I think once we figure out what this business is going to be, we are going to be so much better at all that stuff.”