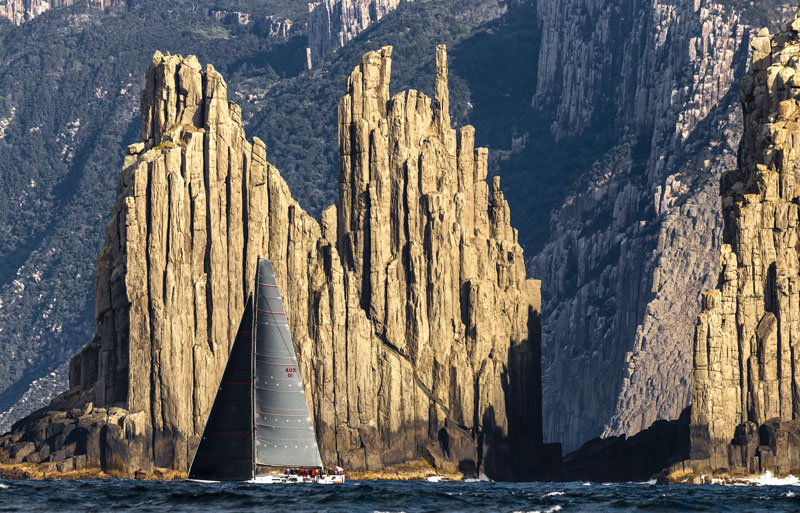 While my wife munched happily on the crispy coating of a just-fried fish and chips filet, and I washed down a dozen Bruny Island oysters with a frothy pint of Boag’s beer, I contemplated how very much alike the sailing cultures of the city in whose waterfront I was now ensconced, Hobart, Tasmania, and my adopted city of Annapolis, MD, actually were.

Both cities are blessed with thousands of square miles of forgiving yet challenging sailing grounds. Both cities boast robust sailing communities.

And while Hobart is most famous as the finishing line for one of the world’s most challenging ocean races—the Rolex Sydney to Hobart Race—and our fair city is more known as the starting point for races, such as the Governor’s Cup and the Annapolis to Bermuda and the Annapolis to Newport Races, both locales host their fair share of weekly yacht club racing and are the jumping off points for a plethora of gunkholing and cruising expeditions as well. 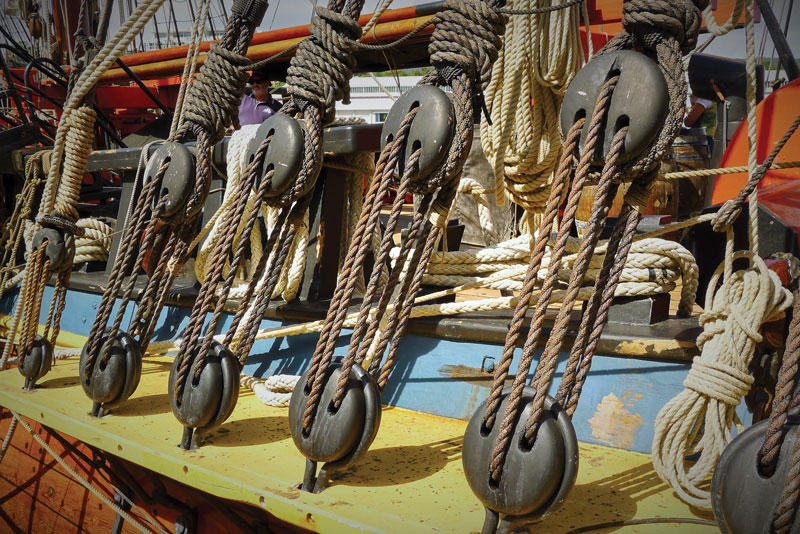 Perched 12 miles inland from the Tasman Sea on the River Derwent Estuary, Hobart is the capital of Australia’s island state of Tasmania. Its population of almost 50,000 (metro area) has sailing and boating in its blood. That’s evidenced by the fact that anytime there’s a waterfront activity, tens of thousands of Tasmanians turn out to quaff beer, slurp oysters, and munch on “snags” (grilled sausages) as they partake of whatever nautical event is in the offing.

“Australians in general and Tasmanians in particular have a great affinity for the water,” says Alison Heatherington, Hobart City spokesperson. “A good many of our ancestors came here by boat… some in shackles as prisoners… and today, the waterfront economy with its tourism, fishing, and cruise ship port of call activities account for a good percentage of our city’s economy.” 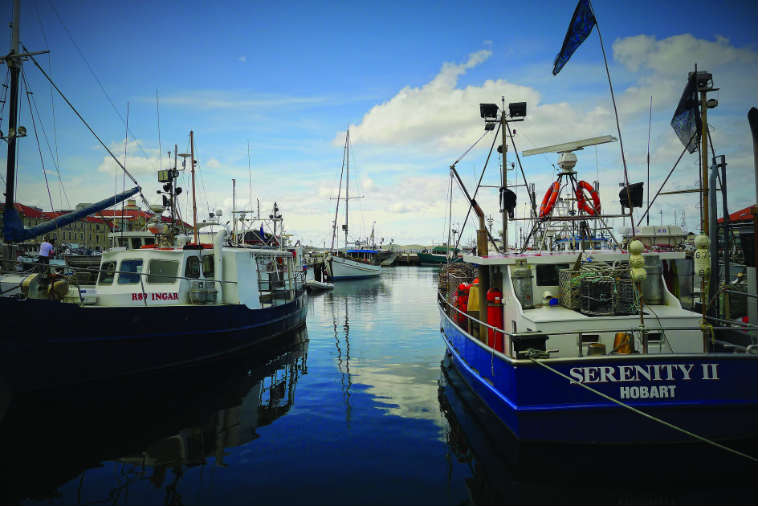 Tasmanian native and Annapolis sailor Dick Neville agrees. Neville, whose sailing credentials include crewing aboard the U.S.-owned super maxi Kialoa III, which set the record for the fastest Sydney to Hobart race passage in 1975 (a record that stood for 22 years), says the sailing scene in Hobart isn’t just about the Sydney to Hobart Race. “The boys down there keep up an active sailing schedule with plenty of coastal and weeknight racing thrown in. The breeze is a little more unpredictable; the tide runs a little heavier; and the conditions can worsen a little quicker. But when it’s all said and done, it’s still sailing. I can attest that many a race is cussed and discussed over a cold beer both here and in Tasmania.”

While the fleets of sailboats that are raced in Hobart differ a bit from those raced here, both sailing communities have a number of similarities that would make an Annapolitan feel right at home in Hobart. 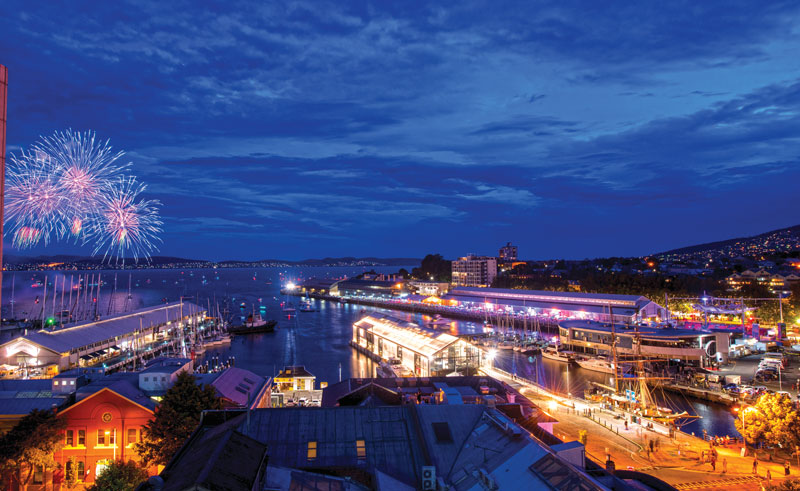 Nick Hutton of the Royal Yacht Club of Tasmania explains: “Hobart has three major keelboat clubs and numerous off-the beach clubs. The Royal YC of Tasmania is the largest with 2500 members. Derwent Sailing Squadron and Bellerive YC each have 500 to 800 active members. Each club hosts harbor and long distance (day) races. We use a rotation system, so that owners have a race each week without wearing out clubs’ volunteer bases.”

The biggest difference between the two cities’ sailing scene, says Neville, is the fact that sailing in Tasmania (and in all of Australia for that matter) is more approachable than it is here.

“It starts with a culture that is inclusive. Many yacht clubs open their doors to sailing enthusiasts to come in for a beer and a burger to be part of the fun. Anybody who wants to get out on the water generally can do so without too much trouble.” 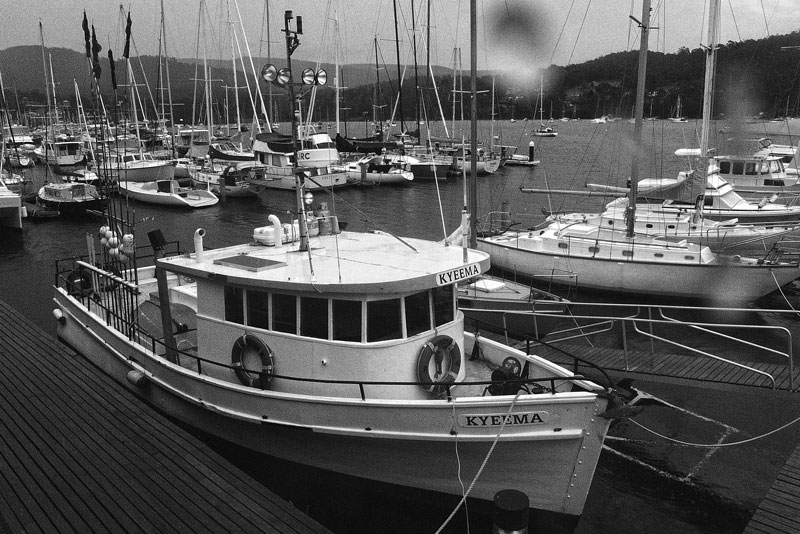 Neville continues, “Annapolis probably has 20 times the number of sailboats than the folks in Hobart have, but I guarantee you that on any given day, those Aussies have more boats on the water than we do. It’s their commitment to fun and inclusiveness that makes sailing so popular.”

The finish to the Sydney to Hobart race is a spectacle unto itself. “The Taste of Tassie,” a week-long food and wine festival that showcases Tasmania’s cool-climate wine, peat-distilled whisky, cider, and craft beer scenes coincides with the conclusion of the race. This foodie bacchanal provides a festive cap to the racing yachts’ arrival in late December. About 250,000 people attend the event.

The entrance of the winning (and losing yachts) from the arduous 630 nautical-mile race creates quite a stir at the Hobart waterfront. Hundreds of spectator boats flood the river as the fleet sails, limps, and otherwise proceeds to Constitution Dock.

It was in 1998 that six people lost their lives due to near hurricane conditions that beset the race two days into the passage. Out of the 115 boats that started that race, only 44 finished. Even in a good year, boats are dismasted; rudders fractured; egos bruised. Line honors this year went to the American Super Maxi Comanche. Co-owner Kristy Clark confessed that she had never been so scared in her life when her 100-foot maxi was knocked down by a combination of wind and waves. The yacht completed the race in a little over two and a third days.

Several Sydney-based yachts offer crew positions. For around $7000 to $8000, one can train on a qualifying boat for up to a week in Sydney Harbor and then go along for the ride down to Hobart as part of the crew. Make sure your insurance is up to date.
There are a host of chartering and coastal cruising opportunities in Tasmania as well. Charter companies include Hobart Yachts, Sail Freycinet, and Tasmanian Walking Company.

Royal YC of Tasmania’s Rick Hutton exudes Aussie hospitality. “Tell your readers to ‘come on down… under.’ We’ll set them up at the club and get them out on the water. There’s no bad time to make a trip to Hobart. Even in our coldest months, there’s something happening at the waterfront.”

Tell him you’re from Annapolis and want to taste some of Tassie’s world famous oysters and microbrewed beer while you’re there. Even if you don’t get to go sailing, these two taste treats are worth the 10,000 mile trip.

Don’t forget to pack your foulies and stock up on sleeping pills for the plane ride over!