Lessons Learned from an Offshore Emergency 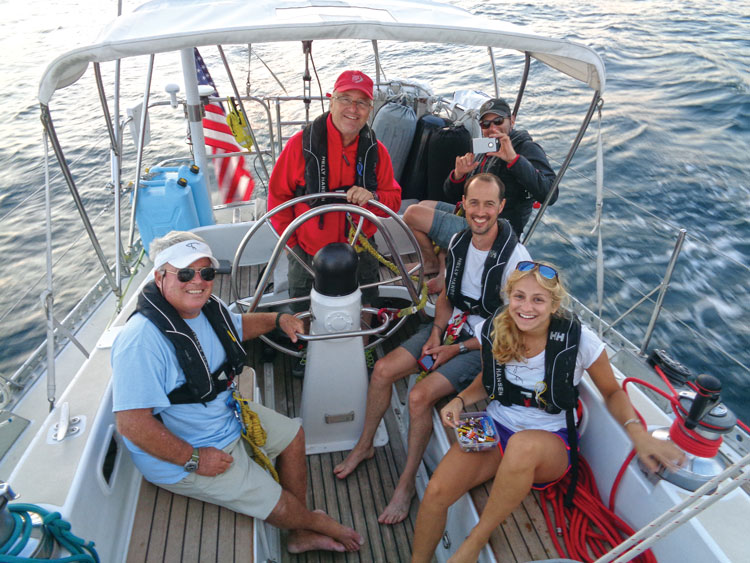 Capt. Dennis and crew Jim, Lance, Bruce, and Liz sailed up to Nova Scotia while Andy recovered ashore. Mia behind the camera.

Isbjorn departed Annapolis on a surprisingly clear and cool July 2, bound nonstop for Nova Scotia. The night before, wild thunderstorms rocked the town, Ben Franklin’s lightning rod on Maryland’s State House taking the brunt of one of the strikes. After those storms and the passage of the associated cold front came clear skies and a perfect breeze out of the west-northwest. We sailed from Annapolis’s Back Creek all the way into the C&D Canal entrance.

My wife Mia and I ran the boat as usual, with four crew members along for the adventure, plus our intern Liz Karamavros. The motorboat ride to Cape May was uneventful. Once offshore, the wind built enough the next morning to hoist the asymmetrical spinnaker. We flew it all day and into the darkness. By then, I was having trouble getting comfortable in my bunk. I had a nagging stomachache that I put down to that pasta dinner not agreeing with me, or some suspect hot sauce I’d eaten that stormy night in Annapolis. 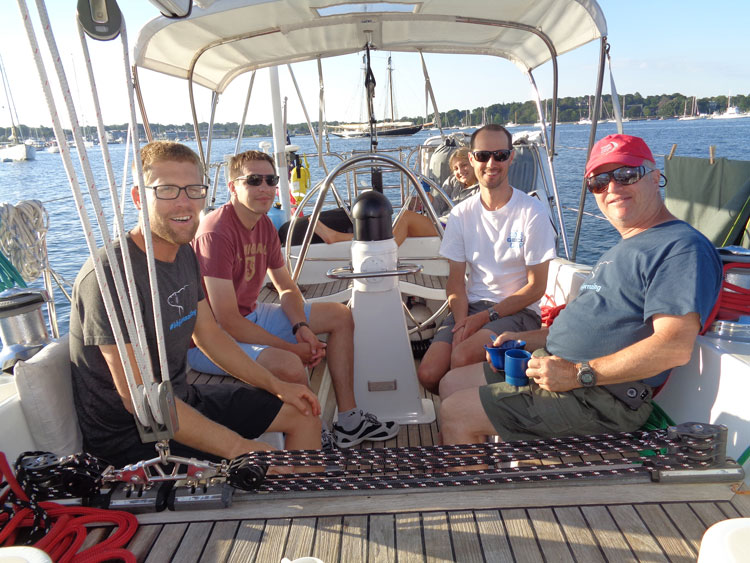 Morning coffee the day after the surgery onboard Isbjorn.

At 2 a.m., the crew rousted me to help untangle the wrapped spinnaker. The effort took the good part of an hour and was a distraction from my discomfort. ‘Great,’ I thought, ‘my stomach is getting better.’ But by the time I went back to bed, it was back.

The next morning, when I resorted to sticking my finger down my throat to try and feel better, I could no longer deny it. Mia got out the ship’s medical guide, but we already knew what it would say. All stomach issues are either serious, or they’re not—get your butts to a hospital, it said.

Eighteen hours later, at 4:30 a.m., I was shivering with fever as I crawled onto the dock in Newport, RI, to greet the ambulance. Five hours later, I was in surgery having my appendix removed. 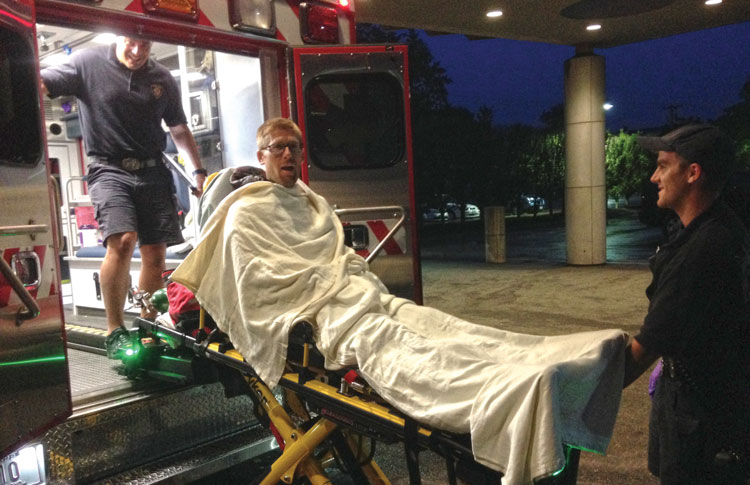 Ambulance ride from the dock to the Newport Hospital.

Here’s what we learned from the experience.

Listen to your body: I knew something was wrong with me before even eating that pasta dinner in the C&D Canal. I never get sick. I have a pretty high tolerance for pain and discomfort. ‘Am I really sick?’ I thought, ‘Or am I just being a wuss?’

By the morning after that spinnaker wrap it was obvious to me that something was wrong. Not only was I still feeling bad, but I was feeling noticeably worse, a clear indication in the medical guide we had to seek outside help. Importantly, I heeded this feeling, despite the fact that we had paying crew aboard who were there to sail nonstop to Nova Scotia. Diverting to Newport was a very tough decision, despite my illness. Listening to my body may have saved my appendix from rupturing and saved me a week in the hospital. Or worse.

Never go offshore without a satellite phone. Period. Cell phone coverage is spotty at places on the Delaware Bay and non-existent even a short distance offshore. We’d have been scarily in the dark had we not had the sat phone with us. Sat phone hardware and service is cheap enough that it’s simply irresponsible to go even near coastal without one.

We had USCG contact numbers, plus numbers for my dad and my sister pre-programmed into the phone, saving both the stress of having to look them up and the stress of dialing them correctly, which can be confusing on a sat phone (as dialing internationally is).

Don’t hesitate to issue a pan pan! Though we contacted the USCG through the sat phone and not the radio, what we essentially did was issue a pan pan: “We’re here, we’ve got this situation on the boat, here’s what we’re doing about it and right now, we don’t need help. But if it gets worse, we might, so please be on standby!’ That’s what a pan pan is.

The USCG was awesome on the phone with Mia. They contacted a doctor who told Mia how to monitor my situation: hourly temperature readings, small doses of Tylenol to control fever, lots of water. They wanted her to call back every couple of hours to keep them informed, and I’m sure if the need arose, they could have come and picked me up in a helicopter (we were 90 miles south of Newport when we diverted).

Have a Plan B already in place if the captain goes down. Since we take paying crew on Isbjorn, our S&S Swan 48, we’re very serious about checklists and contingency plans. By the time we diverted, I was out of commission, curled up uncomfortably in my bunk, hugging a stuffed animal polar bear, and barely able to sip the water Mia kept feeding me. Mia, as mate onboard, assumed the role of captain and immediately took herself out of the watch rotation to tend to me, communicate with the USCG, and navigate. She adjusted the watch schedule for the other four crew plus Liz so they’d get enough rest.

When we arrived into Newport, Bruce, our most experienced crew, brought Isbjorn alongside in the dark and pouring rain, not even touching a fender on arrival. He later admitted it was the biggest boat he’d ever docked, but he did it calmly and like a pro thanks to Mia’s leadership. 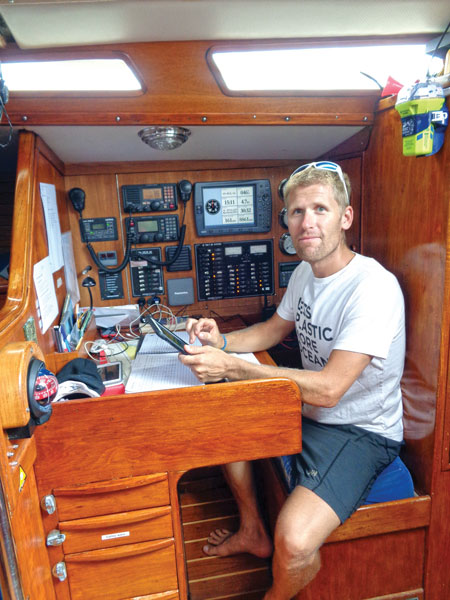 Andy onboard Isbjorn 40 hours before surgery on the way from Annapolis.

Get good insurance. Mia and I spend more time out of the United States than in and so qualify for a special program through Seven Corners (underwritten by Lloyds of London). We had only just bought the insurance in April, having been uninsured since January 2016. It’s a high deductible plan ($3000) but cheap monthly and covering 100 percent of costs beyond the deductible. My hospital bill for the 12-hour stay, CT scan, routine surgery, and ambulance ride? $18,000. Enough said.

Talk to a doctor to get the right meds. One of our major mistakes was not having the triple-antibiotic protocol onboard in case someone shows signs of appendicitis as I did. I want to think that we’d have had it aboard had we known we’d be further offshore, but who knows? The proper protocol can dramatically slow down an infected appendix and sometimes even reverse the infection altogether, and can at the least usually prevent it rupturing. Even on a relatively short trip, such as to Bermuda, this should be onboard. Obviously, much more than appendicitis can happen offshore, so get the proper training (I recommend the full-week Wilderness First Responder course offered by WMI) and the proper medical kit, including prescriptions. Don’t leave this until last!

You’re farther from help than you think, even on the Bay. We were 90 miles from Newport when we diverted, and it was a long 18-hour boat ride for me, who was in considerable pain and discomfort. We were within helicopter range, but the USCG isn’t going to use resources unless it’s absolutely necessary, so I suffered.

Even on the Bay, you’re a potentially long and uncomfortable boat ride plus an ambulance ride from primary care (the hospital), so be prepared!

Post-Script… My surgery was routine, performed laparoscopically, and I was on the street the same day, walking back to the boat (albeit slowly). Upon hearing the news, my dad drove to Newport with his sea bag to stand in as captain for me. The next morning, he, Mia, Liz, and the crew set sail again, bound for Lunenburg, leaving me on the dock. I flew to Halifax four days later, recovering at my cousin’s house in Boston in the meantime.

Exactly one week after my surgery I was back aboard Isbjorn and headed back to sea for the 600-mile passage to St. John’s, Newfoundland. I couldn’t do any heavy lifting and it was tough crawling in and out of my bunk at times, but I was fine.