Postcard from the Galapagos Islands 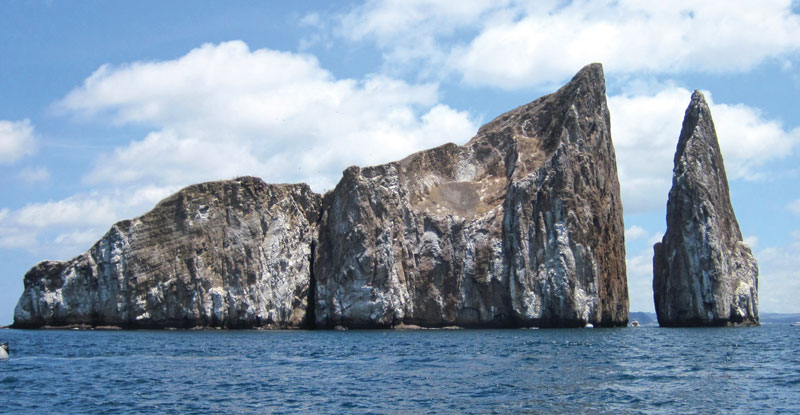 Sailing past majestic Kicker Rock we arrived at the Galapagos Archipelago in the South Pacific Ocean. The Galapagos are a part of the country of Ecuador lying 600 nautical miles off the coast.

It was Valentine’s Day, so I took my wife, Cathy, out for an amazing meal of mixed seafood “doubled” on our table grill! After dinner, having anchored in Wreck Bay on San Cristobal Island, barking sea lions filled our ears, and in the glow of anchor lights, we arrived back at our sailboat, Celebrate.

This same place, San Cristobal, was also Charles Darwin’s first Galapagos landfall in 1835. The entire island group is an Ecuadorian National Park with only three locations allowed for anchoring unless you pay to have a full-time guide onboard, which opens up several more anchorages. With that in mind, we stayed anchored and took local excursions by boat or bus to see the wonderful sights. 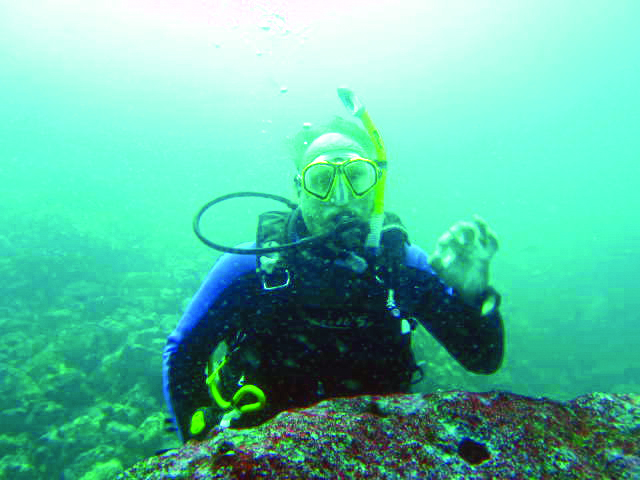 Famous Kicker Rock is a favorite snorkeling place; the rock is split, and the tidal current carries you through the cleft. Spectacular sharks and eagle rays like it there, too, so there’s always something interesting to see and for the big fish to eat (besides the snorkelers). The dive boat took us near the gap and conveniently dropped us off on one side of the rock and picked us up on the other.

In general, on the islands, there is a well-developed tourist infrastructure with many scuba dive shops and tours to see the blue-footed boobies, frigate birds, and giant tortoises.

A week later, we sailed to Academy Bay, Santa Cruz Island, and anchored with both bow and stern anchors, not only to keep the bow toward the prevailing swell but also to allow the many boats to squeeze into the anchorage with limited swinging room. Dinghy landing is not allowed, but there is a great water taxi service. Also, there is a grocery store directly across from the taxi landing and several other “supermarkets” (about the size of a 7-11) and a market for local fruits and vegetables, which made for a healthy walk up the main street. My huge backpack carries 50-plus pounds of food, so several shopping trips later, we had all the provisions we needed for the longest passage of our world circumnavigation, 3000 miles to French Polynesia.

Some of the most astonishing wildlife sightings are right in the anchorage. Discovered by Darwin, Galapagos’s marine iguanas are the world’s only aquatic lizards, with a primitive, menacing look like three-foot spiny alligators. They came swishing right past the boat at anchor. As vegetarians, the iguanas aren’t nearly as dangerous as they appear but can bite if provoked! 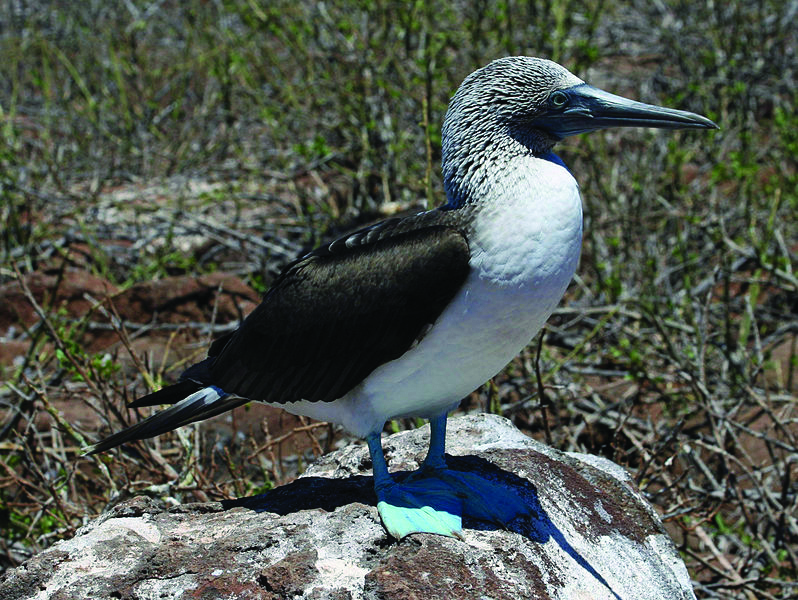 A blue-footed booby in the Galapagos Islands.

A contributing factor to the Galapagos’s diversity of sea life is the confluence of currents. The warm South Equatorial and Panama Currents meet the cool Peruvian Current and the cold, nutrient-rich Humboldt Current coming up from Antarctica. The current situation changes based on the wind and climate conditions.

I joined a group for a “wall” dive at swelly Gordon Rocks. Although the water is deep all around the rocks (100-plus feet), the surface was lumpy. The dive boat heaved on every incoming wave-crest. Once below the surface, the heaving motion became more linear but didn’t subside. The recommended technique is to swim near the wall, then when the swell is pulling against you, grab onto the rock and wait for the swell to reverse. My dive group had an amazing up-close encounter with a magnificent sea turtle and numerous smaller acquaintances, all against a backdrop of hammerhead sharks lurking in the darker deep water.

The water was bathwater-warm, so I was comfortable watching the sea life. Then, something I’d never seen before: a shimmer moving toward me like the heatwaves above a campfire except that it sparkled in the sunlight. The shimmer arrived with the slam of ice water in the face—taking my breath away. It was so cold I was shivering in less than a minute. Then, as suddenly as it had arrived, it was gone and the bathwater returned.

The dive master carried a camera and took lots of pictures and videos. Sometimes I carry my own camera, but it’s a distraction from the beauty and adventure of the dive. The day after the dive, I visited the dive shop with a thumb drive and loaded up some wonderful memories!