Sailing (As Seen from Sydney) 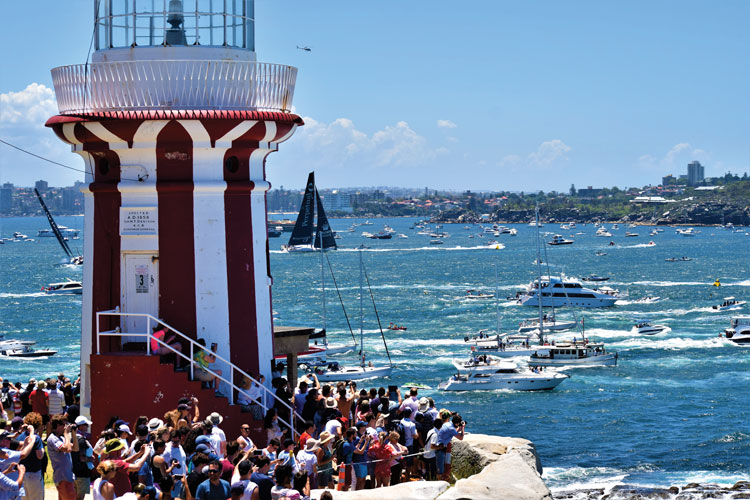 Growing up sailing and racing on the Chesapeake, I felt privileged to participate in the many races offered on the Bay. I progressed, as many do, from the local weekday boozey race around the cans to regional High Point races and then on to the distance and overnight races, such as the Governor’s Cup and Annapolis to Oxford or St. Michaels Races. I discovered the tightknit tribe of sailors in the Chesapeake, and when I encountered another member, we could talk for hours about new gear, races we had done, or the reccurring discussion of ‘not fast’ we had witnessed or been part of. It was like “Fight Club” except the first rule was you had to talk about it.

A co-worker once told me, “You know how to tell if someone is a sailor? They will tell you.” They will, but I soon learned that to those not in our club our actions don’t matter.

I quickly realized my passion was neither mainstream nor valued by the community at large. Though I regaled my non-sailing friends with inflated tales of my racing, I knew my passion didn’t register on even the regional athletic barometer. I never saw my sport in the Washington Post or on the nightly news. It always bothered me a little that the accomplishments of the American sailing community at large went mostly unheralded. If only sailing were as loved as football, baseball, or even soccer.

Sailing is big in Annapolis and in a few other pockets along the East and West Coasts, with enthusiasm smattered along the many lakes both Great and small. In these nautical enclaves our stories matter, and our accomplishments penetrate the local bars and papers. We have our Davis’ Pubs, our SpinSheets, and our Boatyard Bar and Grills. We have our safe places where we matter, but not far away our victories fall on deaf and uninterested ears. I was stumped as to why it had to be this way. I yearned for a place where what I love was loved. I recently found that place, and I was lucky enough to be part of a program that managed to permeate the cosmopolitan consciousness.
Through a series of fortunate events, but a story much too long to tell here, I found myself part of the CQS team in Sydney, for the start of the Sydney to Hobart Ocean Race. Often referred to as ‘The Great Race,’ it starts every Boxing Day, December 26, at 1 p.m. in the middle of Sydney Harbor, regardless of the forecast. Six hundred and twenty-eight very nautical miles later, the finish is in Hobart, Tasmania.

Sydney itself is a natural sailing amphitheater. The harbor is surrounded by sheer cliffs and exclusive neighborhoods built along the steep sloping shoreline. The race starts in the heart of Sydney Harbor, and more than 600,000 spectators camp out on the high bluffs with fantastic views. Watching from private vessels is another popular way to enjoy the start, though the fleet of hundreds of sail and powerboats can present hazards to the racers in the narrow starting area.

The Super Maxis, all 100-footers, dwarfed the 84 other teams, including TP 52s, Volvo 70s, and a few other 70- to 80-footers, any of which would be the largest at the start of most other races, but not the Sydney Hobart. With almost 60 boats longer than 40 feet, it was clearly a big-boat regatta.

In the days leading up to the race it was all the buzz in Sydney. The Super Maxis were on the cover of every major newspaper and the owners, skippers, and crew were interviewed and on the nightly news and achieved celebrity status. The start was shown live on a major television network with the same preparation and dedication as the Super Bowl. There were bios on many of the skippers and racers, and they did background stories on some of the more unique race entries.

I was so proud to wear my Team CQS tee shirt and hat. Strangers would approach me and ask about the boat and the team, clearly having heard or read about us. As the boats finished in Hobart, the town opened up to them. Bars were open around the clock to nourish the crews arriving at all hours. At Constitution Dock, an endless line of sailors and nons alike waited to check out the boat and take selfies in front of it. Though I was very much the lowest man on the team totem pole, it gave me pride to be part of something great. Something that for a few special days mattered to everyone.