What if crew of all ages had a chance to steer the boat and trim the sails?[/caption]

Taji Jacobs saw a Facebook post about a new kind of sailing program, discussed it with the family over dinner, and they decided to give it a try.

Taji was always on the look-out for fun outdoor activities that might be done as a family. Her daughter Adi was nine, fearless, fiery, and loved the feeling of fast. Adi’s happiest day was hitting the required height for the Anaconda roller coaster at the theme park.

Daud was 13, mildly asthmatic, quick, bright, and the technical guru of the family. He hadn’t yet met a school subject he couldn’t ace or a computer game he couldn’t master. Mom was convinced that he needed fresh air.

Taji’s husband Paul often reminisced about sailing with childhood neighbors who car-topped a Phantom to a Northwoods campsite a couple of summers.

Taji thought sailing might be fun for everyone, though she was a bit apprehensive herself. Would she feel scared? What if she didn’t understand the lingo and made a mistake that caused trouble? Would the kids think it was boring? Would Paul be interested? She researched carefully.

The school’s class flyer said that kids would drive a sailboat on the first day, if they wanted to. Check.

The first lesson was like nothing the family had ever experienced. They were met in the parking lot by a confident, articulate counselor named Janelle who handed out sunscreen and raved about the glorious weather and the fact that they’d get wet, but be safe.

Janelle made certain that nobody was wearing cotton or carrying a cellphone in an open pocket. They left them in the car. Everyone picked a lifejacket from a rack in a shed and learned how to secure it correctly. They walked down the dock, where five sailboats with luffing mainsails and furled jibs were held firm by five high school kids, ready to help with boarding and shoving off.

Janelle pulled Paul aside and handed him a waterproof digital camera on a lanyard, suggesting that he “might start snapping now. Your daughter is going to drive.” She then demonstrated safe boarding and helped the whole family to places in the cockpit. She explained how the boom was just above head and that sitting was safest. She showed how cleats cleat and winches winch.

For a few moments, she focused on Daud, explaining that he was going to be the one in charge of speed and comfort and offered basic instructions on when to ease or trim the mainsheet based on the heel of the boat. She used her weight to demonstrate. Taji would have two lines to manage: the green one that unfurled the jib, and the blue one that sheeted it. Paul was already camera happy. Adi, of course, would be at the helm. The kids on the dock helped them cast off.

Janelle pointed to a place for Adi to aim the bow. As Adi turned down, Janelle nudged Daud to ease the mainsheet, talked Taji through the signals from the jib, and kept a knee near the tiller, though Adi seemed not to need her help. Janelle gave clear instructions and explained why with each one, even as she pointed out things they shouldn’t miss: the graceful wooden classic yacht moored nearby, other families sailing, the red and green markers telling them where to and where not to sail, and their own grins.

The boat accelerated as they came into more wind, and a ribbon of cool spray came over the bow as it parted the choppy waves outside of the mooring area. The dousing was surprising at first so they screeched and then laughed.

Paul seemed transported back to a different time and place and giggled like a teenager. Daud was already working up sail angles and curves and the leverage created by purchase between blocks. Numbers blasted through his brain. Adi was getting the hang of helping the boat to ride the waves while holding a straight line. The kids seemed in sync.

Janelle suggested that the family huddle so she could take their picture in front of the bay lighthouse, seen from the water side. This was a special sight, she said, that only sailors can see, “like the backside of the moon to an astronaut.” Taji noted that they had gone from the car to an all new world in 60 minutes. She couldn’t wait to return.
Everyone traded places. Paul drove, Taji trimmed main, Adi trimmed jibs, and Daud figured out the video setting on the camera.

That night, the Jacobs family combined the best shots into a highlights reel, complete with captions and a rocking soundtrack. Daud posted it on Youtube and shared it on the sailing school’s Facebook page and his own. Taji sent it to her parent group.

The next Sunday afternoon the Chen family from down the street joined the Jacobs family at sailing school. Janelle’s co-counselor Everett met the Chens — three kids, their mom, and her partner — in the parking lot with sunscreen and a camera. Janelle and the Jacobs family sailed clear across the bay to a sheltered harbor to swim and dig in mud and write an exciting new chapter called sailing school in the family adventure.

If you know of family sailing programs on the Chesapeake, please email [email protected] and tell us about them.

About the Author: Since Nicholas Hayes’s bestselling book “Saving Sailing” came out in 2009, he has been an advocate for family sailing and innovative learning programs through speaking and writing for SpinSheet and other sailing publications. 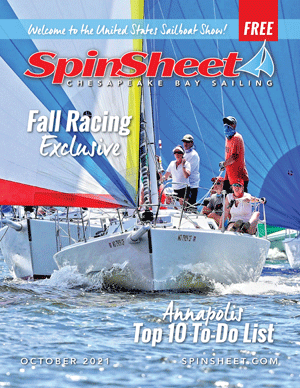