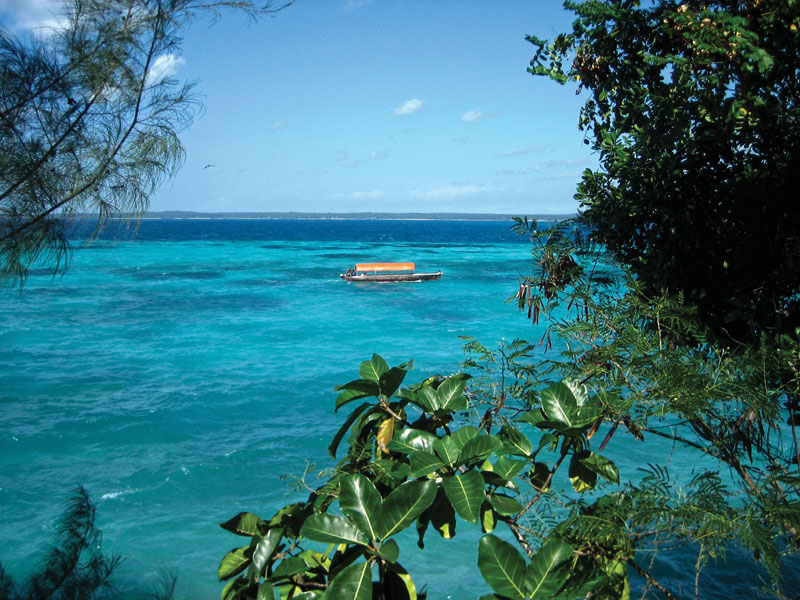 To charter a sailboat in an exotic place, to combine a sailing vacation with a safari: such were the considerations when Washington, DC, sailor Kevin MacDonald, his then girlfriend Jessie, and four friends chose Zanzibar, a Tanzanian archipelago off the coast of East Africa, for a 2009 New Year’s trip.

MacDonald had one other significant consideration in mind: to get engaged. He thought perhaps Africa would be the place for that. Due to unforeseen circumstances (namely girlfriend ESP), he proposed on Christmas Eve before departure, making the trip for the newly engaged couple memorable before it even began. MacDonald and his now wife are no strangers to New Year’s charter vacations. They take one every year: British Virgin Islands, Belize, Greece. “We like a little variety,” he says. 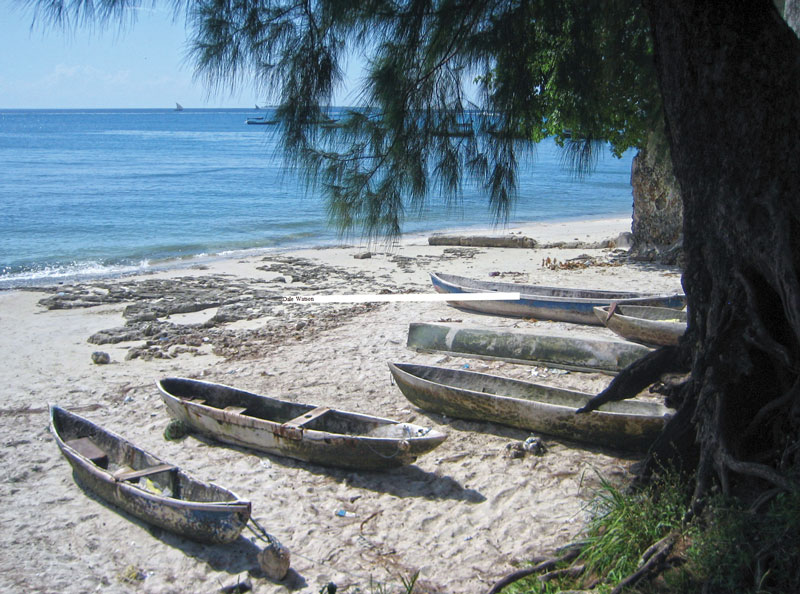 After a long airplane voyage, with a stopover in Switzerland, the group arrived in Dar es Salaam, Tanzania. They then took a ferry over to Stone Town, the main city of Zanzibar. Their 36-foot catamaran, which delivered late, had engine issues (one did not work) and other issues, such as a stuck mainsheet, which would persist throughout the trip and require extra assistance. As a bonus, and a development which helped to alleviate a frustrating situation, the local charter company’s boat engineer also turned out to be an impressive chef and joined the crew for the voyage.

Provisioning the boat in an open air market was its own adventure.  “Someone was dragging a fish on dirt ground, which was a bit surprising,” says MacDonald. “However, there was an amazing abundance of fresh fruits and vegetables, and all of the vendors were friendly and helpful for the inexperienced crew.” 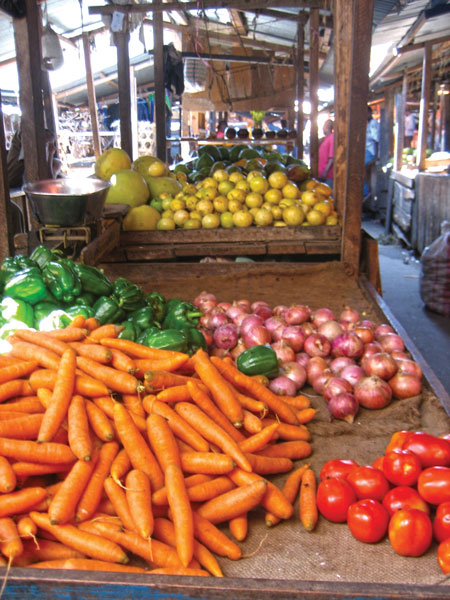 Then, there was the problem with ice. “You can’t just buy ice cubes.” Jessie and Ali, the boat’s engineer/cook, ended up going from door to door to find ice. They found someone willing to part with their own ice blocks for 85 cents each. “You can imagine how long that lasted. It was a rustic experience.”

In a predominantly Muslim community, provisioning alcohol was a challenge. “It’s the Hindu population that sells alcohol. You have to find the right beer vendor. Jessie had volunteered to go out to buy beer for the boat, but women buying alcohol is not typically something seen around Stone Town. Getting people to pick up and carry the alcohol was a challenge and quite taboo,” says MacDonald. 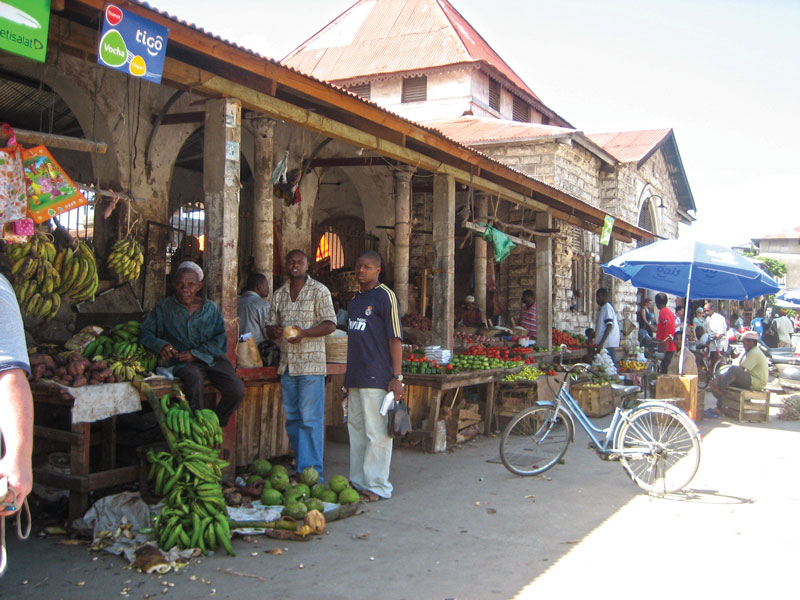 The sailing turned out to be terrific. The group took three- to four-hour sails over manageable distances and stopped at sandbars and different ports along the west coast. “It was breezy at about 15 knots and only slightly choppy, waves at two or three feet. When you look out from the island to the sea or vice versa, it’s the most beautiful seascape you’ve ever seen. Since it’s only about a foot deep close to the island, the blue green colors in the shallows are amazing.”

On the downside, “Sometimes, you end up anchoring in deeper and rougher water than you want to.” 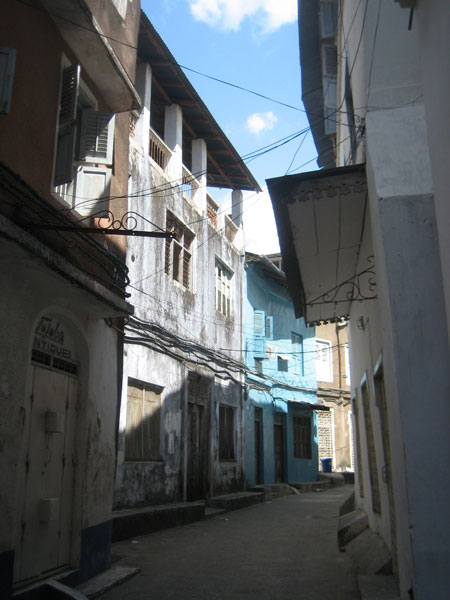 Other than one very difficult anchoring and re-anchoring scenario, “It was a great place for the pristine sailing conditions,” says MacDonald. “It was spectacularly beautiful. The weather was wonderful (in the 80s). The logistics were the challenge.”
The crew traveled to the resort town of Kendwa, north of the island for New Year’s Eve. Kendwa is known for its resorts and for its Full Moon Parties. The crew enjoyed ringing in 2009 together.

When asked if he had a favorite part of the trip, the DC sailor said, “There was a day we’d stopped off at a sand bar. We were swimming; our chef was cooking. Some people came by with live squid. We had this great sail followed by a swim, followed by this amazing meal. The chef cooked the squid with a nice little curry sauce and homemade French fries. It was a beautiful day, and it was great to be around friends.” 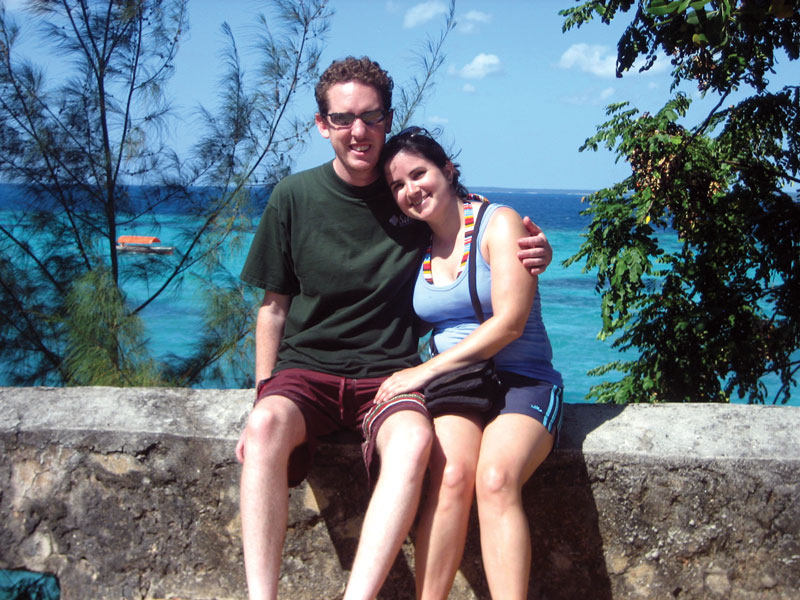 Would the MacDonalds recommend this trip to friends? “When people ask about it, I tell them go, see Zanzibar, but I don’t necessarily recommend chartering,” MacDonald admits. “Our boat was so broken that it felt like that was going to be a fairly common experience with the infrastructure being what it is in such a remote place. It’s a wonderful place with a wonderful potential for sailing…. and we like a really rustic experience! We were comfortable going into the market and asking for items, but not all charter guests would be.”

Tacking a Tanzanian safari onto their trip after the charter was an easy thing to do. MacDonald and crew took a four-day safari, which felt long enough for them. “I highly recommend it,” he says.