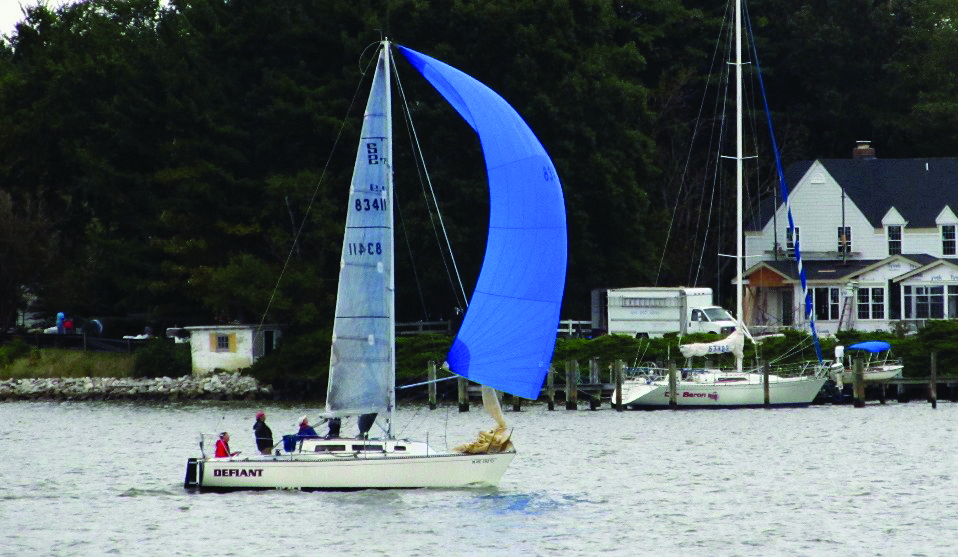 Herrington Harbour Sailing Association (HHSA) has active cruising and racing fleets, but they are usually on the water at different times. Cruisers head out on the weekends for destinations around the Bay. Racers show up every Wednesday night to compete and pop out for weekend day races or CBYRA events. In September, we tried something different. What if the cruisers headed to the finish of a destination race such as the NASS Oxford Race? Or what if HHSA did a destination race, one that would finish in the West River? What madness might erupt?

The good kind of madness. On October 10, the HHSA cruisers sailed over to Oxford. Early that morning, HHSA racers started the NASS Oxford Race. The two converged at the finish on the Tred Avon River. The two fleets met up at Brewer’s Oxford Marina for drinks and socializing. Compliments to the Cantata crew for bringing the crabs. Afterwards, the racing crews headed over to the party at the Tred Avon Yacht Club. The after-party continued at Brewers with the cruisers.
Earlier in the year, the HHSA competition committee designed a new race from Herring Bay to West River. It has been several years since HHSA conducted a point-to-point race. The idea had legs and was enthusiastically supported by HHSA racers and cruisers. It also got the attention of the Pirates Cove Race Club and West River Sailing Club. With some great coordination and volunteers, the first HHSA Race to West River was held on September 24. Along with HHSA boats, some Pirate Cove boats participated in the race.

Again, the HHSA cruisers headed to Galesville to meet the racers and party on the dock and at Pirates Cove. (Note: It’s very helpful to know the shoals in West River.) Congratulations to Frank Albert of Resolute and Fred Caisson of Defiant on the spinnaker wins. Non-Spin was won by Jim Murtland of Avalon, and the Cruising Class was won by Bill Jacobson on SeaBonds. Many thanks to Pirate’s Cove for their support of the race and after-party.
The participation in both of these races and cruises was up significantly. The club is buzzing about the experience. HHSA plans to repeat them for next year and is looking to expand participation in the West River Race with possible inclusion in the CBYRA High Point races for 2017. There were even some rumors of a race to Solomons just before Screwpile. Hmm? For more information about HHSA, go to hhsa.org.