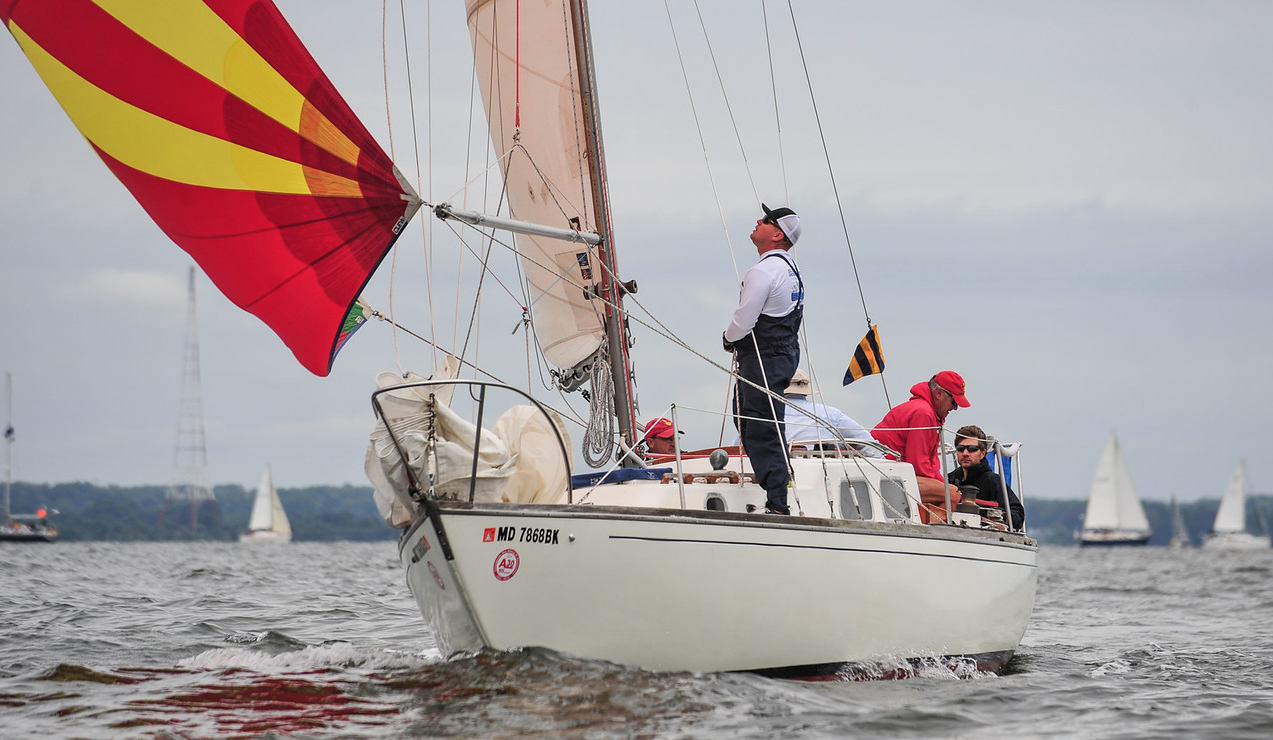 Good morning! This article is meant for the racing sailors. Cruisers, why don't you enjoy this incredible Chris DeBurgh video? We know he's your favorite.

Ok. Racers: here's the thing. You've by now heard that there are going to be a ton of race boats at the Annapolis Sailboat Show. And racers, I know this will be putting you out of your element, forcing you to stand on the docks with the "dark side" of sailing: the cruisers. But have no fear - I am here to help!

During my tenure at SpinSheet, I've spent a lot of time with cruisers. Not so much the ralliers and the bluewater people... really just the weekend warriors and a few offshore delivery guys. Mainly just cocktail cruises - it's not like I've gone to St. Mikes with anyone or anything. Anyway, I'm here to help you not only survive but actually really enjoy this Show. I speak cruiser. Here is what you need to know.

1. Cruisers don't adhere to any sort of schedule. If they say they're going sailing at 11 a.m. but then it's pouring rain at 11 am, they won't even leave the restaurant where they're having brunch. Racers, there could be absolutely no wind and it's pouring buckets, and they'll still show up to knock somebody off a podium. Cruisers just don't care. Don't get mad if they don't show up. They think there's something better to be doing.

2. Jewelry to cruisers is like Mount Gay hats to racers. I know, I know. I don't get why you'd want an anchor around your neck, either. But they think our matching Mount Gay hats make us look like the saddest Little League team reunion ever. So we're at an impasse.

3. Cruisers think having primo dock space right next to the Club is a good thing. They're all about how long it takes to walk from their boat to a restaurant downtown. Racers don't understand why in the world the boat is in the water if you aren't racing her today.

4. Cruisers want to see belowdecks on the boats at the Show. They'll ask about refrigeration, berth space, water and holding tank capacity. But going down below makes any racer uncomfortable. The racer just needs to know how many waters each person gets, and where to find the bucket if necessary.

5. Don't ask cruisers if their sails are North or Quantum, UK or Ullman. They have one of everything. And they'll be really excited to tell you about how old each sail is, and how they came over directly on the Mayflower. It's supposed to impress you, but instead it will just make you sad. Don't go there in the first place.

6. Don't tell the cruisers your speed records. Don't tell them about that one time you had the asym up and hit 25 on the run before your buddy Doober left his position on the vang to take a selfie, and you were on your ear before you could say, "Dammit, Doober!" Cruisers will not understand a word of what you just said, and you'll spend the next 45 minutes explaining how the vang works.

8. Cruisers don't wear sailing gloves. I don't get this one at all, but it's true. And it's not like their sheets and halyards are soft, or their sails are any lighter. Those old mains weigh a metric ton. However, if you're ever out among cruisers and you see one who is wearing sailing gloves, you'll know he or she goes both ways. Make friends.

9. Don't get into a drinking contest with a cruiser. They can drink us under the table. But here's their trick: they mix their cocktails. There's no passing around a bottle of rum to the whole crew and hoping no one has an oral herpes outbreak happening. They even have blenders down below - another mystery - and electricity, and ice that doesn't taste like your sandwich, and cups with their boat's name on it. And when they get drunk and pass out on their boat, there's an actual bed. They don't just end up sleeping wrapped up in the spinnaker, spooning the dehumidifier for warmth. Those cruisers are pretty smart when you think about it.

10. About those cups - basically cruisers spend the extent of your foul weather gear budget on monogrammed stuff. There are bags, wine bottle carriers, accent pillows, tumblers, boat cushions, sail covers, and hats, all with "Offline" or "Seas the Day" written on them in a font from the 80s. You're supposed to find this impressive. Just sip your drink thankfully and say that it makes you feel at home, enjoying spending time at this dock with a great location and this cute racer/cruiser you just met.

Then compliment them on their adorable necklace. Anchors aweigh!

Come down to the Annapolis Sailboat Show, everybody! SpinSheet has something for both racers and cruisers.