Everyone who has ever owned one knows there is no such thing as a "maintenance free" boat. However, with its minimal use of wood and maximum use of aluminum moldings and liners, the Beneteau-First 38s5 may require no more than a good scrubbing, hosing down and an occasional coat of wax to maintain her cosmetic appearance and keep you cruising in style.

The First 38s5 was introduced in 1990 and continued in production until 1995. The design resulted from the collaboration of designers Jean Berret, who was responsible for the hull and rig, and Philippe Starck, who designed the interior. With the exception of a plethora of vertical, horizontal, square, rectangular and teardrop-shaped cabin windows, the appearance of the 38s5 is quite typical of production boats of this vintage. Freeboard is moderate, and the sheer is quite flat in order to maximize interior volume. The bow is rather plumb again, to maximize interior volume as well as waterline length.

The length overall of the design is 38’ 3" , beam is 12’ 4" , and displacement is 14,500 lbs. The 38s5 was offered in a deep draft version which draws 6’ 6" and a shoal draft version drawing 5’ 2" . The same rudder was used on both versions and, by my estimate, is at least two inches deeper than the keel on the shoal draft model. This leaves the unsupported spade rudder quite vulnerable to damage should it be grounded even in the soft bottom of the Chesapeake Bay.

The hull of the 38s5 is constructed of solid laminates of fiberglass cloth and resin with a fiberglass grid system bonded to the hull to withstand stresses generated by the rig and keel. The decks are constructed of a composite utilizing various core materials to reinforce the structure. The interior makes extensive use of fiberglass liners and pre-cut and fabricated modules. The advantage to this method of construction is considerable cost savings over more traditional handcrafted joinery, while the drawback is a lack of ready access for regular inspection and service. 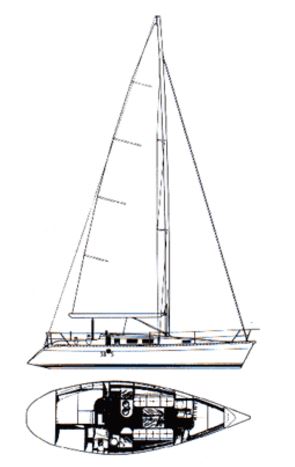 With its various models, Beneteau builds more than 2800 boats per year and has led the way in bringing innovative mass-production techniques to the recreational boatbuilding industry. They are experienced and confident enough in their methods to have offered a 10-year limited warranty of the hull and deck which includes osmotic blistering.

The decks are wedge-shaped with very highly radiused contours from the cabin top to the side decks and, no matter what you might think of the non-traditional appearance of this layout, the functionality is hard to overlook. Once you learn to avoid the numerous ports and hatches, you will find this a very safe and easy deck to move about on, particularly while sailing at normal angles of heel.

The deck layout features a large anchor locker forward with a mechanical anchor windlass as standard equipment. All halyards and sail controls are led aft to the cockpit concealed under fiberglass panels so that there is nothing to foul or trip over. Grab rails are recessed into the cabin top. On one hand they are not as easily reached as rails that stand proud but, on the other, they are not as easily tripped over when moving about.

The cockpit is T-shaped and accommodates three or four adults comfortably, although the seats are only about four feet long and not comfortable for napping or sunbathing. There is a split in the stern rail for convenient access to the small, sugar-scoop swim platform and boarding ladder.

Two interior layouts were offered on the 38s5, one that featured mirror-image quarter berth cabins aft and a second that featured an owner’s cabin aft with "En-suite bathroom" (Beneteau’ s words not mine), rather than the twin cabins. Otherwise, the two models were identical and feature a V-berth cabin forward followed by a head/shower to port and hanging locker to starboard. In the main saloon area there are port and starboard settees with a centerline drop-leaf table followed by a port galley and starboard navigation station. The standard interior features a lot of stark white fiberglass, aluminum trim, aluminum moldings and stainless steel hardware and has a bit of a sanitized, hospital room look. A teak woodwork interior was an option and results in a warmer, more yacht-like appearance at the cost of higher maintenance, of course.

Auxiliary power is provided by a 28-hp Volvo diesel that is sufficient for the 14,000+ pound displacement.

With the exception of a single sea trial on a flat calm day, I have not had an opportunity to sail the 38s5, although friends and acquaintances who have, report her to be quick, easily handled and well mannered. I suspect this is true and would expect the 38s5 to perform very well in light to moderate winds. I would also suspect her to be a bit on the tender side when the wind picks up. I don’t have access to the line drawings but, according to Beneteau’s literature, the waterline beam is 9’ 7" - nearly three feet narrower than overall beam. Combine this with a ballast displacement ratio of a mere 33%, a shoal draft of slightly over 5’, and it usually adds up to what many would consider an initially tender boat. The sail area to displacement ratio is 18.4, and that, by today’ s standards, is quite moderate. With common sense and timely reefing, I suspect the 38s5 is quite manageable.

If you’re looking for a boat with good performance, reasonable accommodations in a 38’ package and you’re more inclined to spend your weekends sailing than cleaning teak or varnishing brightwork, the 38s5 is worth checking out.