Despite the current trend toward sleeker aft cockpit models, there was a time when center cockpit designs dominated the cruising boat market—some smaller than 25 feet. The accommodation, visibility, and security benefits of these designs continue to make them popular choices among long-term and weekend cruisers alike. Add to that the performance touch of the Farr design team, and it’s easy to see why the Beneteau 44 CC remains popular more than five years after production of the model was discontinued.

Personally, I don’t find many center cockpit sailboats aesthetically pleasing. To my eye, Beneteau’s 440 aft cockpit version of this model is more handsome, but this is purely personal taste and has nothing to do with the merits of this design. To their credit, the design team did an admirable job with a difficult design task. The 44 CC has a pleasing, subtle sheer, and the rather high freeboard is nicely disguised by a wide teak rub strake on the hull side. The overhangs are short, resulting in a contemporary look, and the bulk of the large trunk cabin is minimized by a gentle slope forward. My prejudices aside, it would be difficult to design a better looking center cockpit boat given this length restriction.

Beneteau’s design specifications often differ slightly among various publications and brokerage listings. For example, the specified draft of the 44 CC is 1.79 meters, which, rounded off, translates to 5.9 feet but is often written as 5’ 9” rather than 5’ 11”. My point here is not to bore you with mundane minutia or to wow you with my minimal math skills but to remind you that fitting a 14’ wide boat in a 13’ 10”-wide slip becomes problematic and has led to more than one law suit. If dimensions are critical, always take actual measurements rather than relying upon published numbers. 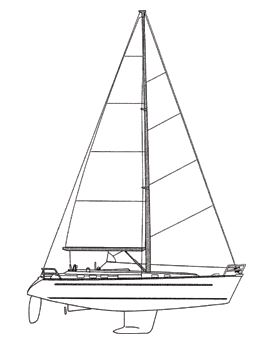 Beneteau is the largest builder of sailboats greater than 25 feet and has a long track record of building moderately priced, sound boats. Hulls are hand-laid fiberglass in a female mold with vinylester resin for outer skin and polyester resin for interior laminates. Laminates are engineered with a variety of fiberglass fabrics for strength, cost control, and weight reduction. They make maximum use of modular construction techniques with molded hull and deck liners and an elaborate grid system of stringers, floors, and engine and tank supports for primary structural support. Structural adhesive compounds are used to join components which may be stronger than the more traditional fiberglass and resin attachment method. The success of this method depends on precision and quality control, which can differ from one boat to another, but Beneteau generally has a good track record. There is still no getting around the unavoidable fact that many areas remain inaccessible for routine or periodic inspection with this method of construction.

Otherwise, I have only two minor complaints. First is the absence of a stainless steel or bronze rub strake on the teak rub rail, which leaves the rail very susceptible to damage even from routine docking maneuvers. And second, the attachment of the rudder stops to rather flimsy, non-structural joiner work.

The deck layout features a large center cockpit, which provides excellent visibility from the helm, one of the reasons for the popularity of center cockpit models. Standard equipment on the Beneteau 44 CC included an electric anchor windlass—nearly a must for a boat this large. Standard equipment also included a mast with internal mainsail furling gear and an electric halyard winch, which can be used for unfurling the sail. While this is a useful feature, caution is advised, because if there is glitch unfurling the mainsail, the winch is powerful enough to break things. Find out what is causing the problem rather than applying brute force to solve it.

Two interior arrangement plans were offered with the Beneteau 44 CC, one with two large master cabins, one fore and one aft, and a second with a master stateroom aft and twin guest cabins forward. The aft master stateroom is the same on both models with a queen centerline berth, port and starboard storage and hanging lockers, and a large head to port with a small tub (it’s a European thing, I think) with shower. Of the two forward arrangements, one has a queen centerline berth, makeup table and chair, port and starboard hanging lockers, and a bureau. The other model has a forward V-berth and bunk berths to port on the passageway forward. Both models have a second head forward, a midship main saloon with large U-shaped dinette, a navigation table, and two bucket chairs. The galley is along the starboard passage from the main saloon to the aft stateroom. One other nice feature is a hanging locker just to starboard of the companionway for foul weather gear.

Auxiliary power is provided by either Volvo or Yanmar diesel engines ranging from 60 to 85 horsepower depending on the model, and I believe all are sufficient.

You can pretty much bet that anything coming out of the Farr design office has been performance-optimized considering her intended use. The displacement/length ratio of 188 and sail area/displacement ratio of 17.5 are smack dab in the middle of what I consider an ideal range for a modern cruising boat, and I don’t believe anyone with reasonable expectations of this genre will be disappointed with this boat’s performance.

Although more Beneteau 44 CCs are for sale in Europe, there are currently a half dozen or so offered in the US ranging in price from $149,000 for a 1994 model in Washington State to $229,000 for a 2001 model on Long Island Sound. Bottom line: this is a boat that offers a lot of accommodation, good sailing characteristics, and sound construction for relatively reasonable price.