It’s time again for the U.S. Sailboat Show in Annapolis, and it seems that every year the number and size of multihulls on display increase. So, it seems appropriate to take a look at a catamaran this month. 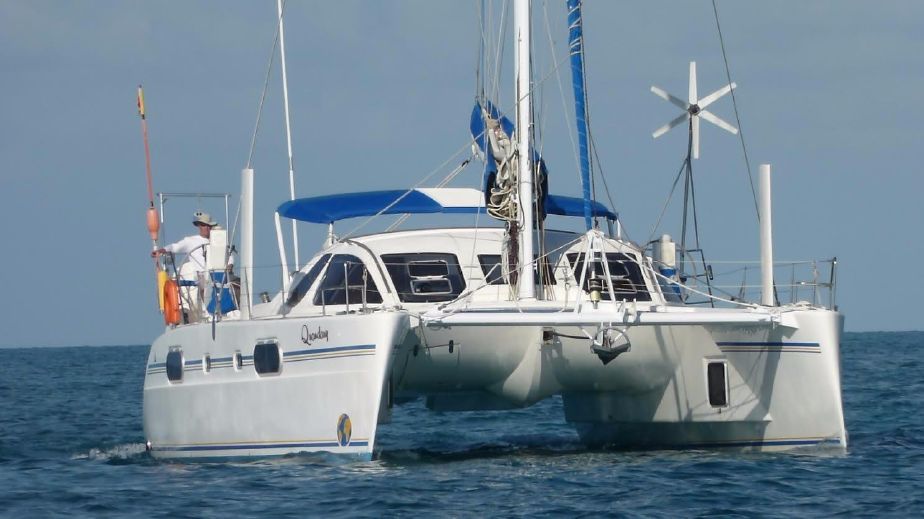 The Catana 431 was designed by Christophe Barreau and is built by Catana S.A. of Cedex, France. It was introduced in 1998 and is currently marketed as the Catana 43 Ocean Class. The model has been popular in Europe and the Caribbean since its introduction, and more come to the United States each year. Her accommodations put her in a class of cruising, rather than racing catamarans, but her design and construction would suggest her designers are more focused on performance than some catamarans in this genre.

The first thing likely to strike most people about this design is her considerable, six-foot freeboard to the deck edge and more than 10 feet to the top of the cabin. To my eye, the result is a rather ungainly looking vessel, but owners are likely to appreciate the look when some of the design considerations are considered.

There are more than six feet of head room throughout the boat and no banging your head each time you step down from the bridgedeck saloon to the cabin areas in the hull. More importantly, the bridgedeck clearance off the water is more than two and a half feet.

To avoid excessive pounding in a seaway and that annoying slapping of waves against the bottom of the bridgedeck at anchor, the bridgedeck clearance of a well-designed cruising catamaran should be greater than 5.5 percent of the waterline length. Within limits, a higher percentage is better, and the clearance of the Catana 431 is a very satisfactory 6.25 percent.

Unlike monohull sailboats, most catamarans are not ballasted and rely on beam for stability. A number of factors including overall length, hull shape, and volume will determine a designer’s beam to length ratio, but a good target for boats under 50-feet length is 50 percent. Lighter boats with less volume tend to have slightly higher ratios and heavier boats lower ratios. The Catana 431 is relatively light, with narrower hulls, and has a good beam to length ratio of 56 percent.

Catana uses daggerboards rather than the fixed keels found on many boats in this size and class. Daggerboard boats have several advantages. In severe weather, daggerboards can be raised, so boats will slide down large waves rather than “trip” over a fixed keel and are considered less likely to be overturned by waves. Daggerboard designs tend to be more Weatherly. Boards can be raised to reduce drag and resistance when not needed. On the negative side, they are more vulnerable to damage, more costly to construct, and built with underwater running gear and rudders more exposed to damage.

The Catana 431 is built entirely of vacuum-bagged sandwich construction with PVC foam core, Twaron (Kevlar) fabric, and vinylester resin. There are 21 full or partial structural bulkheads in each hull—also foam-cored—and reinforced with carbon fiber for very light, strong, and rigid hulls. For safety, watertight bulkheads are aft of the forepeak and forward of the engine room. According to the manufacturer, the foam core construction assures that the vessel will remain afloat even if totally filled with water.

There are four large (48-inch by 16-inch) opening hatches in the outboard hull sides, which provide great visibility and ventilation. On two models I have seen, several of the hatches did not seal securely, and the hinges were difficult to operate due to salt corrosion. Another caution is that these boats are designed and built in Europe where electrical systems, particularly AC electrical systems, are quite different. Although very well-engineered for European shore-side hookups, wire sizes and systems may not be suited to U.S. hookups.

One of the major attractions of catamarans is the impressive accommodations they offer when compared to monohull models of the same length. The Catana 431 offers two arrangement plans, one which dedicates the entire starboard hull to an owner’s suite with a king-sized berth aft and a very large head and shower forward separated by storage lockers, a washer and dryer, and a small desk. The port hull has double cabins forward and aft with a head and shower in the middle. The alternative layout offers a starboard layout identical to the port. The main saloon, at the bridgedeck level, has a large U-shaped dinette, navigation station, and galley with 360 degrees visibility and can be opened to the cockpit for additional seating and another large table.

Auxiliary is provided by two 40-horsepower Volvo marine diesels and saildrives with three-blade folding props as standard equipment. The engine rooms, aft in each hull, are accessed through large deck hatches. There is plenty of room in each for easy access to all machinery. Although effective, the engine room sound insulation, on the models I have been aboard, sloughs off so that it’s impossible to escape without finding yourself covered in black plastic specks.

I recently found four Catana 431s offered for sale, from a 1999 model asking $552,000 to a 2003 model at $700,000. Because these boats appeal to a worldwide market, it’s a bit tough to pinpoint market value; although, from my experience, these asking prices seem high. A 1999 model recently sold in the mid-Atlantic area for less the $420,000, and the average price of five boats sold over the last year is $426,000. Not inexpensive, but not bad for a comfortable, well-built, and well-equipped world cruiser.