C&C Yachts of Ontario Canada, with a reputation for competitive racers and racer/cruisers, is not exactly the first name that pops into most folk’ s minds when thinking of a cruising sailboat, so the Landfall 38 may surprise some. 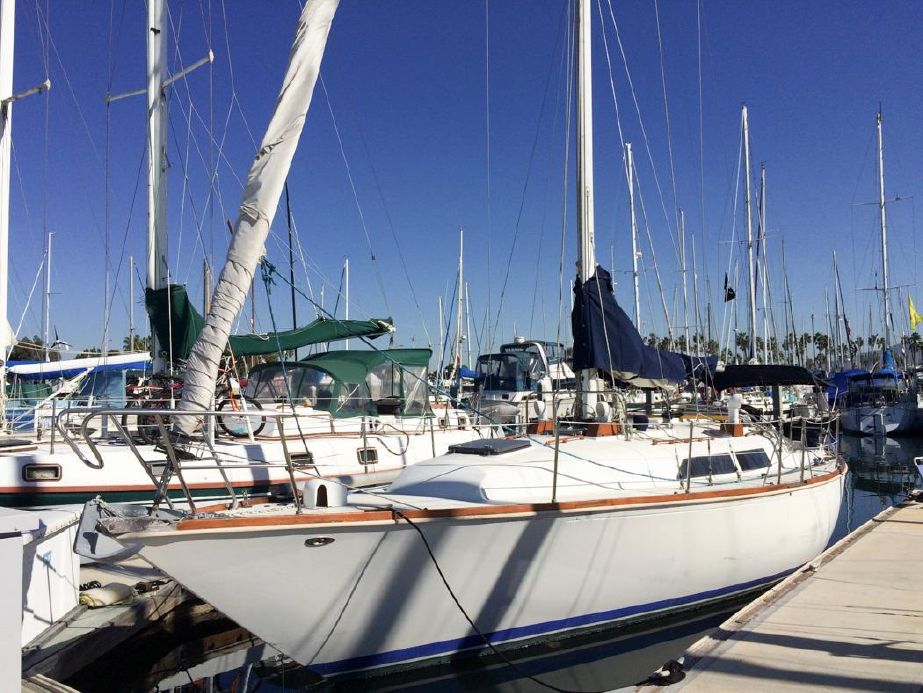 The Landfall series was C&C’s first attempt to build a large production boat with the emphasis on cruising, as opposed to the racer/cruisers on which C&C had built its reputation. The first of the series, the Landfall 42, was introduced in 1977 and built principally for the charter trade to compete with Morgan and Whitby’ s center cockpit models. The Landfall 38 was first introduced in 1979 and continued in production until 1985. The principal dimensions are 37’ 7" LOA, 12’ beam, 5’ draft, and displacement is 16,700 lbs with 6,500 pounds of external lead ballast.

About 180 boats were built over the seven-year production run.

Construction of the Landfall 38 is typical of other C&C models with composite hull of fiberglass resin and balsa wood core. C&C has more experience with composite construction than practically any other boat builder, and it is unusual to find any significant structural problems with the hulls of these boats. The decks are likewise composite construction with balsa wood core. The deck and hull are fastened on an inward flange. The Landfall series are different from other C&C models in that they don’t have the familiar slotted aluminum rail at the deck edge. Instead there is a teak toe rail that is bolted together with the hull and deck with stainless steel nuts bolts and washers on 6" centers.

The deck-to-hull joint, deck hardware fasteners, and windows can be an annoying and persistent source of leaks on the Landfall 38. Particularly vulnerable are attachments near the deck edge such as lifeline stanchions. Hardware is through bolted with backing plates or large fender washers. Where these overlap the hull flange, the washers and backing plates do not lie flat on the surface. This results in uneven stresses, loosening, and eventually leaking of the fitting. Fittings that are attached through the cored composite should be checked very carefully, because leaks into the core can destroy the strength of the composite quite rapidly.

The Landfall 38’s decks are well laid out and uncluttered. Side decks are wide, and rigging shrouds are well inboard to allow easy passage fore and aft. There is an anchor well on the foredeck that will need a good latching method retrofitted if a prior owner has not already done so. The cockpit is T-shaped with a large diameter wheel. This is a good arrangement and very comfortable for the skipper. The drawback is that the seats are not long enough to lie down on.

Interior arrangements are very much a matter of personal preference and intended use, but for my taste the arrangement of the Landfall 38 is just about perfect for a coastal cruiser. The forward cabin has a V-berth arrangement that is cramped at the forward end and would be a tight fit for two adults but should suit a single or two children quite well. The V-berth cabin is followed by the main saloon with opposing port and starboard settees that convert to single berths when needed.

Further aft along the port side is a very large U-shaped galley with lots of storage and counter space. On the starboard side is an equally large head with large sink and separate shower stall. The daysailor and weekend cruiser may feel too much space has been dedicated to the galley and head, although the long-term cruiser will certainly appreciate these features. Further aft is the owner’s cabin with a good-sized double quarter on the port side and navigation station to starboard.

Auxiliary power was provided by Yanmar’s 30 hp 3HM model on earlier models that was later replaced by their 3QM model. In order to maximize cabin space the engine is tucked in under the cockpit and has a V-drive gear. The engine location presents some servicing problems, and the space above the engine is so limited that a funnel with a long hose is needed to add engine oil or coolant. There is engine access through a panel in the quarter berth behind the companionway steps and through the starboard cockpit locker, but it’s bound to seem as if there is always something in the way when you are trying to get access to what needs servicing. This is an easily driven hull, and 30 hp should be adequate for most operating conditions.

Although the Landfall 38 is a cruising boat, her heritage is that of a racer/cruiser. That heritage is reflected in her handling and performance, and she is easily balanced and driven at all points of sail. The sail area displacement ratio is 15.9 and displacement length ratio is 271, both of which are reasonable for this type of cruiser. The large foretriangle and equally large headsails make a good roller furling system a must.
Good quality cruising boats aren’t cheap; however, compared to similar size boats, it seems a well maintained Landfall 38 could be an excellent value.

Reviewed in the April 2000 issue of SpinSheet by Jack Hornor