Traditionally, naval architecture in general and yacht design in particular have been understood to be a blending of art and engineering. However, while attempting to cram maximum accommodations into any given overall length, today’s designer may be overlooking the “art” side of this equation. 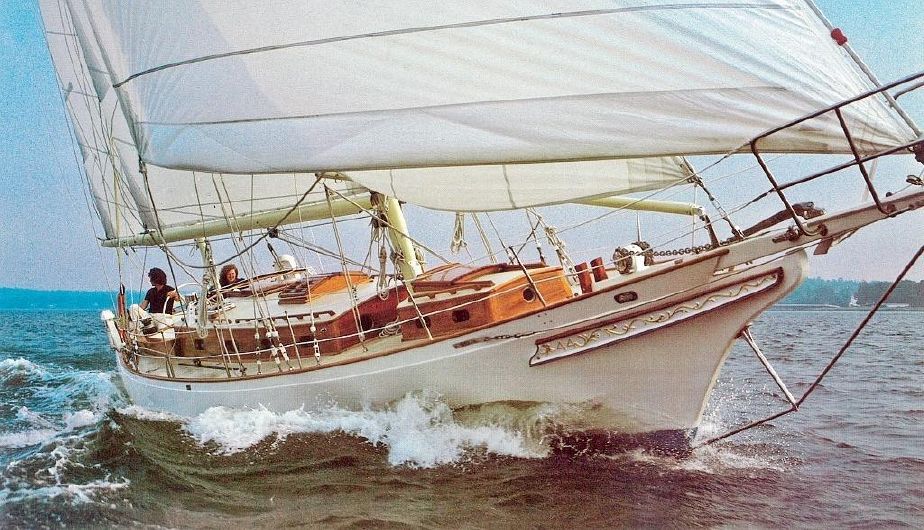 When the legendary L. Frances Herreshoff drew the lines for Topga II, later to become the iconic Ticonderoga, he certainly understood the importance of artful design. Influenced by Herreshoff’s work, John Cherubini of Delran, NJ also produced a work of art when he drew the lines for the Cherubini 44 back in 1971. No disrespect to Mr. Herreshoff, but to my eye, the higher aspect sail plan, longer trunk cabin, and shapelier clipper bow make the Cherubini 44 even more handsome than the vessel that inspired her—not a simple accomplishment when you consider that at 50-foot LOA, Cherubini had nearly 22 feet less overall length to work with than did Herreshoff.

The first Cherubini 44 was completed in 1977, and a 30th anniversary 44 Mk II model was introduced in 2007. The nearly unnoticeable changes include a slightly higher cabin, slightly higher bulwarks, and system improvements. The on-deck length is 44 feet and two inches, waterline length is 40 feet, beam is 11 feet and six inches, minimum draft is four feet 10 inches, and designed displacement is 28,000 pounds.

Even though this design is artful, the importance of good engineering and careful construction has not been overlooked. Without going into detail, suffice it to say that Cherubini is confident enough to offer a lifetime hull warranty—confidence that is justified. Prior to the Mk II version, only the hull and cockpit were built of fiberglass. The decks were made of two layers of 3/8-inch marine plywood, the cabin top was three layers of quarter-inch marine plywood, and the cabin sides were solid mahogany. All were either cold-molded or sealed with epoxy resin. Construction was very robust, and problems are only found when routine maintenance has been overlooked. The Mk II model has a molded fiberglass composite deck structure with a foam core and Vinylester resin.

In his book The World’s Best Sailboats, author Ferenc Mate describes the Cherubini’s cockpit as “the world’s most beautifully designed.” Actually, there are twin cockpits, an elliptical steering cockpit aft and a rectangular crew cockpit forward. Because the Cherubini 44 is ketch-rigged, the mizzen mast is stepped in the forward cockpit, making the area a bit tight but nonetheless, a truly beautiful design. There is excellent visibility from the helm, broad side decks with substantial bulwarks for secure footing, and an excellent arrangement forward for storage and handling of ground tackle.

If there is a downside to beautiful yacht design, it is that attractive lines do not typically result in a lot of interior volume for a given length. However, with 44 feet on deck and 50 feet length overall, Cherubini had sufficient volume to incorporate comfortable, if not sumptuous, accommodations.

Most 44s have been built on a semi-custom basis allowing original owners input resulting in each interior being slightly different, yet following the same general arrangement. From the cockpit, you enter the aft cabin and navigation area and move forward to a starboard head with shower and a U-shaped galley to port. Further forward is the main saloon with port and starboard settees and a centerline drop-leaf table and in the forward cabin are hanging lockers and drawers on each side with a V-berth in the bow. With less than 12 feet of beam, there’s no room for queen-sized berths and lounge chairs, but this is an incredibly well-crafted and traditional interior.

Over the years, Cherubini 44s have been powered by a variety of manufacturers’ diesel engines ranging from 37 to the present 75 horsepower Yanmar. Early models with less than 50 horsepower were underpowered; although older boats may have been repowered. In fact, all the boats currently on the market and all those reported as sold within the last several years have engines rated at more than 60 horsepower. After the navigation station is removed, engine access is good. If necessary, the engine can quite easily be removed through the companionway hatch.

Most will be surprised by the rather impressive sailing performance of the Cherubini 44. Owners proudly boast of her one-time win over the famous Running Tide in a Ft. Lauderdale-to-Key West SORC race and a more recent first place finish in the 2007 Marion-Bermuda race. Sure these wins were on corrected time, but still impressive. For a boat of such traditional design, her displacement is moderate and her waterline long, resulting in a displacement length ratio of 195 and a sail area displacement ratio of 19.7. These numbers are more in line with those of a modern performance cruiser than a traditional offshore cruising boat designed more than 30 years ago. Her relatively low freeboard can result in a wet ride if pushed hard in rough conditions, but the double headsail, ketch rig allows for numerous possible sail combinations to balance the boat in nearly any condition.

The price of a new Cherubini 44 is over a million dollars outfitted with sails and decent electronics. If you’re interested, but that’s a bit out of your price range, there are at least three used models presently offered at prices ranging between $240,000 and $350,000.

Even at these prices and considering her uniqueness, this is certainly not the boat for everyone. But, if you appreciate beautiful boats, and you get a chance to see one of these up close, take the opportunity, if for no other reason than you’d go to a museum to see a great work of art. If you’re looking for a time-and sea-tested classic that will take you to and turn heads in any harbor in the world, this could be the boat for you.