The Chris-Craft Sail Yacht and Caribbean 35 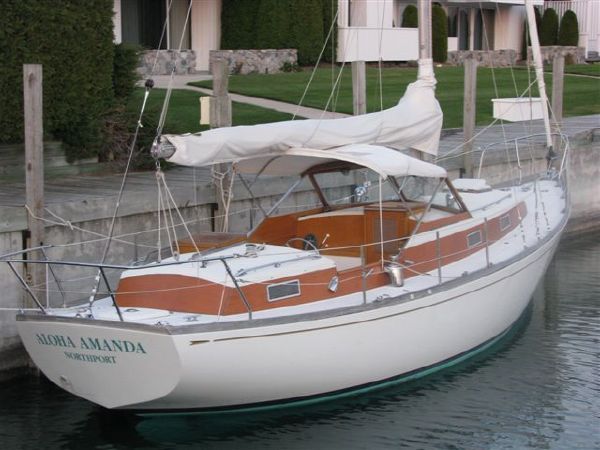 Brace yourselves stink potters, the granddaddy of all production power boat builders, Chris-Craft, was once a builder of sailboats—a fact that even surprises a few old salts from the blow boater side of the aisle.

In the early 1960s, Corny Shields, sailing’s legendary “Gray Fox of Long Island Sound” purchased a controlling interest in the Chris-Craft Corporation. Soon after, Shields commissioned Sparkman and Stephens to design Chris-Craft’s first sailboat—the Sail Yacht 35, which was introduced in 1963.

Over the next 15 years, Chris-Craft went on to build eight sailboat models between 26 and 42 feet, but the Sail Yacht, later renamed the Caribbean 35, holds a number of distinctive “first” honors. Foremost among them, this was the first fiberglass boat built by Chris-Craft. The model is believed to be the first Chris-Craft designed by an outside design firm. And, literally last but perhaps not least, the Caribbean 35 was the last sailboat built by Chris-Craft when they discontinued sailboat production in the mid-1970s.

Although Shields was a well-known racing sailor, he was a very successful businessman and smart enough to leverage his new company’s long-standing reputation for building comfortable motor yachts. The noted design firm of Sparkman and Stephens was chosen to design Chris-Craft’s first sailboat offering. Even by the standards of the day, her sail area was modest, horsepower was abundant, and she had a center cockpit aft cabin arrangement. The choice was made to market the model as the Sail Yacht 35, but they could have just as well called her the Motorsailer 35.

As noted above, this was the first Chris-Craft to be built with a fiberglass hull, although the superstructures of early models were stick-built (piece by piece, in place) of fiberglass, marine plywood, teak, and mahogany. The later Caribbean models were built with a molded fiberglass composite cabin and deck structure. The quality of construction is typical of production-built fiberglass boats of the 1960s and 1970s. The newest models are now at least 30 years old, the oldest well over 40, and it’s unreasonable not to expect to have to invest a little time and money for renovations and repairs. Hulls are typically sound, although rudders and their attachments can be problematic. Fiberglass attachments of bulkheads and joiner work are likely to suffer some degree of detachment. However, deteriorated decks and superstructures are, by far, the biggest and potentially the most expensive problems found with both models.

Both the Sail Yacht and Caribbean are center cockpit models; although, there are some quite noticeable differences between the two. The forward cabin and aft cabin of the Sail Yacht 35 (pictured) are on the same plane with a motorsailer-type fixed windshield forward of the companionway and three rectangular ports in the cabin side. The Caribbean model has a slightly raised doghouse at the aft section of the forward cabin with two large fixed windows in it and four small rectangular opening ports. Although the cockpits of both models are small, that of the Caribbean 35 is even smaller; a concession to better accommodations and a below deck passageway from the forward to the aft cabins.

Unlike modern production cruising boats whose arrangements may be planned first and the boat designed around them, the accommodations of the original Sail Yacht 35 seem almost an afterthought and are dated even by early 1960s standards. There is a very large forepeak for sail storage and accommodations up to the main saloon which features port and starboard settees, the backs of which raise to make upper and lower bunk berths. There is a centerline drop-leaf table between the settees for dining and a very small and minimally equipped galley aft to starboard. The head with shower is to port. The aft cabin is accessed from the cockpit and has port and starboard single berths with a less than private potti between the two.

With the introduction of the Caribbean 35 model, arrangements were considerably improved. They included a traditional V-berth cabin forward followed by a starboard head and shower with storage lockers to port. The main saloon has a starboard dinette that converts to a small double berth and a port galley. A port-side passageway leads to the aft cabin, which has single berths port and starboard, a settee between them, and a small private head.

The original Sail Yacht 35 was powered by a 60-horsepower Chris-Craft gasoline engine, and a 30-horsepower Westerbeke diesel was offered as an option. Over the years of production, other auxiliary power options included Westerbeke, Volvo, and Perkins diesel engines between 30- and 75-horsepower.

It seems clear that comfort, and not speed under sail, was the primary consideration with this design. Even by 1963 standards, the displacement/length ratio of 347 and sail area/displacement ratio of 13.4 would likely have been thought to be indicative of sluggish performance. A little sluggish perhaps, but Sparkman and Stephens designed an easily driven hull, which, by most reports, is a respectable performer particularly considering these performance indicators.

Several Sail Yacht and Caribbean 35s are currently offered for sale on the web at prices ranging from $20,000 to $44,000. Sales reported over the last year have ranged from $6000 to $25,000, and on average, selling prices were 24 percent below the asking price.

Admittedly, owning one of these classics is a labor of love and not for anyone who isn’t willing to invest a lot of sweat equity, but the Sail Yacht and Caribbean 35 offer an opportunity to sail a piece of history—the first production fiberglass boats from a manufacturer who captured the imagination of boat lovers everywhere.