The Citation series from Irwin Yachts was aimed at economy-minded buyers looking for a more performance-oriented boat that would provide accommodations and amenities for comfortable family cruising. The Citation 34 was introduced in 1978, remained in production through the 1985 model year, and, in that time, 305 Citation 34s were built with most being sold along the Eastern Seaboard and Great Lakes. 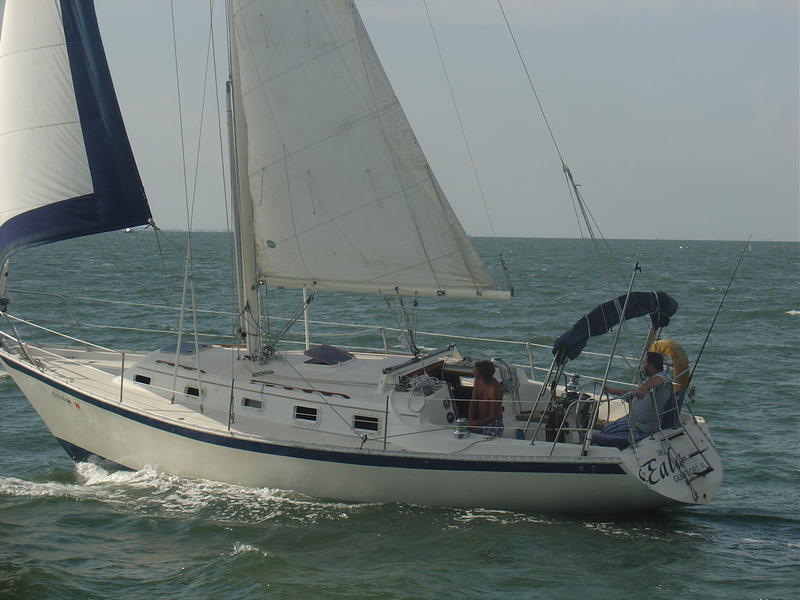 Designed by Irwin’s founder, Ted Irwin, the Citation 34 shows a hint of IOR design influence in the aft sections of the hull, but, in general, the design has moderate proportions and none of the IOR extremes that can lead to bad handling characteristics.

The length overall is 34’3" , beam is 11’3", and the 34 was offered with three keel configurations. The draft of the full keel model is 5’4" and shoal draft is 4’ even. There was also a keel/centerboard model that draws 4’ with the board up and 8’ with the board down. From my experience, the centerboard model seems to have been the most popular choice among buyers. The full keel option ranks second, and shoal draft models are rare, as I have not run across one.

Displacement is listed by the manufacturer as 11,500 pounds for all models, although the specified ballast increases from 4,100 pounds to 4,500 pounds for the shoal draft and centerboard models. This is common practice to account for the fact ballast is higher when draft is reduced.

The original design changed very little over the eight years of production. There was a slight modification of the transom, and the most apparent change came in 1982 when the long, fixed window at the aft end of the cabin trunk was replaced with two smaller opening ports.

Construction of the hull of the Citation 34 is a conventional lay-up of fiberglass mat, woven cloth, and polyester resin. The decks are constructed of a composite of fiberglass and balsa wood core. Molded fiberglass liners make up much of the interior, and, although examination of structural components and attachment is difficult, I have not examined any 34s that showed obvious signs of serious problems with the hull structure other than osmotic blistering.

The decks, on the other hand, are a different story. The deck and hull are joined on an inward flange with sheet metal screws through an extruded aluminum toe rail. There have been more than a few problems with the fit of the deck-to-hull joint, and leaks are a common problem that are difficult and expensive to repair due to inaccessibility.

Although some of the deck hardware is attached with nuts, bolts and washers, the lifeline stanchions, bow and stern rails are fastened with screws. This is not only unsafe, but loosening fittings allow water to penetrate the balsa core decks leading to very expensive repairs. Leaks around poorly fit windows and ports are also common but are more easily remedied.

The side decks of the 34 are wide enough to allow easy access fore and aft. The cockpit is large enough to accommodate four adults comfortably, and the mainsheet traveler is on the cabin top to avoid cluttering the cockpit. The cabin trunk is low enough to allow the helmsman good visibility from a seated position.

The below deck accommodations of the Citation 34 are clearly the model’s strong point. It can accommodate four quite comfortably on short cruises, although, for longer trips, storage space is limited, and there is little privacy. The arrangement features a V-berth forward followed by head and shower to port and hanging locker to starboard. In the main saloon there is a dinette to port and a starboard settee. There are a navigation station and quarter berth aft of the dinette and a large U-shaped galley to starboard. The galley is well equipped with propane stove, oven, a top-loading icebox, and more counter space than is usual for boats of this size.

Auxiliary power for most Citation 34s is provided by a 15 hp Yanmar engine, although a 22 hp Yanmar was optional. Under most conditions, the 15 hp will do the job, but it is marginal in strong currents, rough water, and strong headwinds. The larger engine would be preferred for its greater power and smoother operation. Access for routine engine maintenance is very good through a hatch in the cockpit deck.

The Citation 34 sails well and is easily balanced on all points of sail. A moderate sail area to displacement ratio of 18 results in good performance under a wide range of wind conditions, and rigging shrouds are well inboard allowing good sheeting angles and good windward performance.

The Irwin Citation offers good performance and accommodations for the shopper looking for a coastal cruiser at a reasonable price. At present it seems to be a buyer’s market for this model and could be a good opportunity to find a reasonably priced boat that has had problems addressed by a previous owner.

Reviewed in the November 2000 issue of SpinSheet by Jack Hornor