Circumnavigator Tania Aebi was inexperienced and poorly prepared for the task when she set out on her round-the-world adventure. And, although her survival and ultimate success had much to do with incredibly good luck early in her voyage, the fortuitous choice of a good boat in which to make the attempt can’t be overlooked. With this well documented journey as well as other successful offshore passages to its credit, the diminutive Contessa 26 has become a highly regarded bluewater cruiser. 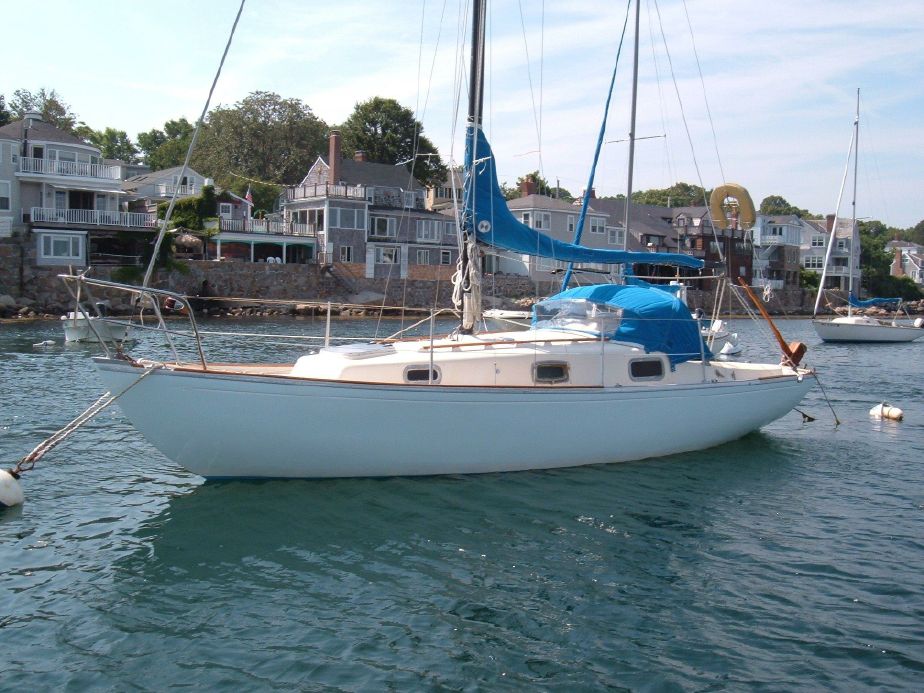 It is hard to miss the influence of classic Swedish folkboat design when looking at the Contessa 26. She was designed in 1965 by David Sadler and introduced at the London Boat Show in 1966 by Jeremy Rogers’ Contessa Yachts Ltd. of Lymington, England. Between 1966 and 1977 Rogers built 350 Contessa 26s. In 1970, J. J. Taylor and Sons Ltd. of Ontario Canada acquired the rights to build the Contessa 26 in North America, and between 1970 and 1990, they built nearly 400 additional Contessa 26 models. Due to some legal challenges the Taylor-built Contessa 26s were also marketed as the J.J. Taylor 26s for a period of time.

Although a number of the British-built models have made it to American shores, most Contessa 26s found in the United States are from the Canadian builder. The principal dimensions, LOA 25’ 6" , Beam 7’ 6" and draft 4’ , remained the same no matter which builder; however, there were a few differences between the two models. The most noticeable is the slightly smaller cockpit and large lazarette locker of the UK built models. For this feature, some believe that the UK-built Contessas are the better bluewater model. In fact, neither has an ideal cockpit for bluewater service, as the bridgedeck is not high enough and the cockpit sole is so close to the waterline that it does not drain efficiently. These are both compromises necessitated by the Contessa’s limited size.

For boaters who have dealt with the deteriorating balsa cored decks and hulls of older fiberglass boats, the solid fiberglass construction of the Contessa 26 will be appreciated. Without the aide of a stiffening core there is noticeable flex in the foredeck but the overall construction is sound. Several years ago I was involved in an insurance loss where a Contessa 26 broke loose from her mooring in a storm and ended up on the rocks in front of the U.S. Naval Academy. She suffered little more than a lost rudder (the pintles were not secured) and a few scratches. The Contessa’ s mast is stepped on deck and substantially supported from below by a deck beam and main structural bulkhead to prevent compression sagging commonly seen on older boats with deck stepped mast. Ballast was 2300 lbs. of encapsulated iron until 1983 when Taylor switched to cast lead. Taylor’s specifications indicate the ballast weight increased to 2600 pounds with the change to lead.

On deck the limitations imposed by the Contessa’s 7’ 6" beam are apparent. The foredeck is small and side decks are narrow, but there is a raised bulwark that offers a great deal of security when going forward in nasty weather. There are substantial lifelines and handholds on the cabin top for added safety. Contessa’s companionway arrangement is unique to a design of this vintage. Instead of the standard sliding companionway hatch, the aft end of the coach roof has an exaggerated rise for approximately a foot either side of the centerline as seen on some of the modern single-handed offshore racing machines. The arrangement makes for a stronger and more waterproof cabin entrance but requires stooping to get below. This feature is also likely why the designer did not include a higher bridgedeck that would have further complicated access.

I have heard the interior of the Contessa 26 described as, among other things “efficient" , "warm and comfortable," and "safe and secure," but, in fact, these are all euphemisms for small and cramped. What else could you expect with just 21’ of waterline length and 7’ 6" of beam to work with? There is a V-berth forward followed by a port hanging locker and starboard toilet followed by a galley with an icebox and sink. Further aft there are port and starboard quarter berths.

Despite minimal accommodations and a narrow beam, the berths are all well over six feet long, and there is considerable storage space for a 26’ boat. The cabin sole was lowered an inch or so by Taylor in 1983, and later model boats offer slightly greater standing and sitting headroom.
A variety of auxiliary engine options were offered over the 25 years of Contessa production. They included a 7 hp Vire gasoline model as well as 6 hp Petter and 7 hp Farymann diesels. All provide marginal power and are becoming increasingly more difficult to maintain, as parts are difficult to find. Some of the last Taylor-built models were powered by more desirable, single cylinder Yanmar diesel engines. Many older models have been repowered with Yanmar engines.

Although the Contessa 26 has a full keel, large transom-hung rudder and considerable wetted surface, she has a narrow, easily driven hull and its performance may just surprise you. She is able to sail quite close to the wind and, despite a short waterline, she has little tendency to hobbyhorse in choppy seas. Her low freeboard and narrow beam do result in a wet ride if the conditions get rough. But the Contessa tracks exceptionally well and offers about as secure a feeling as you could expect of a boat of this size.

As you would expect from boats that range from 10 to 25 years old, the price of used models varies considerably. However, if you’ re intent on some serious offshore sailing, and your budget is limited, the Contessa 26 has proven by doing that it’s a tough choice to beat.