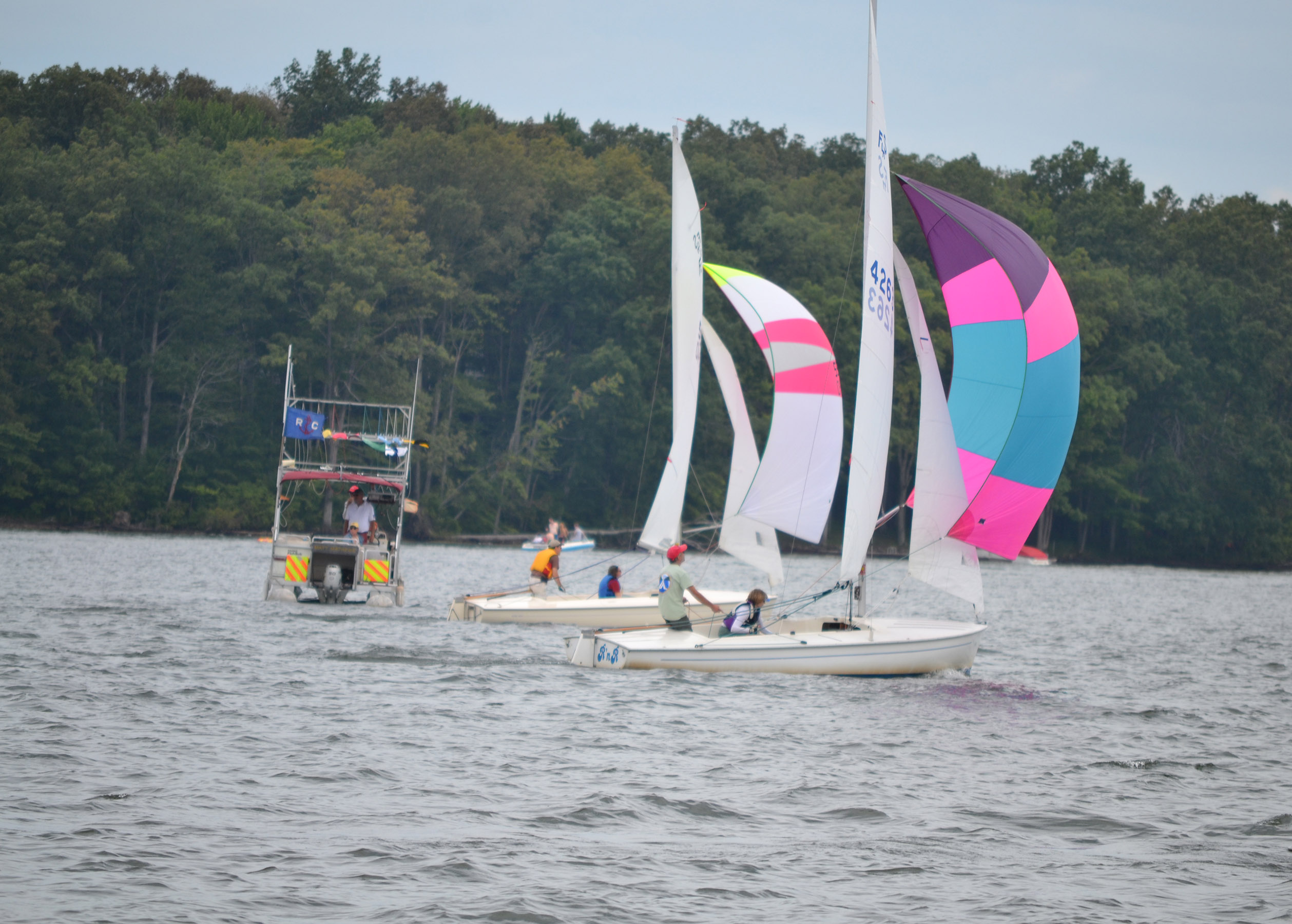 When I speak with sailors and prospective sailors, I am quite often asked what I would recommend as a good “starter boat” for a beginning sailor. I have toyed with the idea of a “ten best” or similar review, but have found there are far too many variables to treat the subject fairly in a limited space. However, if I were to compile a “ten best” list, the Flying Scot would most certainly be included. Among the many reasons I would pick the Flying Scot for such a list is that many who chose her for their first sailboat have found her to be the only boat they ever needed. When one boat can provide a lifetime of sailing enjoyment, it’s a special boat.

Gordon K. “Sandy” Douglas, the dean of U.S. planing dinghy designers, designed the Flying Scot in 1956 after his nearly 40 years of boatbuilding and design experience. Douglas had designed and built the 17-foot Thistle in 1945 and followed that with the 20-foot Highlander class in 1951. The Thistle class met with almost immediate success and remains an active racing class today. Although less successful than the Thistle, the Highlander is a big planing hull design with a relatively high sail area/displacement ratio. Those ratios are 47.6 and 40.8, respectively, and result in an exciting but fairly demanding boat to sail and one that is not very forgiving of beginner’s mistakes.

In an effort to offer a more manageable family-oriented boat, Douglas designed the Flying Scot with the same 191-square-foot sail area as the Thistle, but she weighs in at 850 pounds, 20 pounds heavier than the Highlander. The resulting sail area/displacement ratio is 34, and to say the combination was a success would be an understatement.

Still in production after more than 50 years, more than 5800 Flying Scots have been built since 1957. Not only Douglas’s most successful design, the Flying Scot remains one of the leading one-design classes in the United States.

In 1957, Douglas, who had been one of the principals of Douglas and McLeod Boatbuilders (later Tartan Marine), formed the Gordon Douglas Boat Co. in Ohio to build his new design but soon moved the operation to Western Maryland. Douglas retired in 1971 and sold the business to longtime employee Eric Ammann who, after 20 years of ownership, again sold the business to one of his longtime employees. In 1991, Harry Carpenter bought all the company assets and renamed the company Flying Scott, Inc. This truly unique succession of ownership has resulted in over 50 years of production without interruption.

Unlike Thistle and Highlander whose early models were built of cold-molded wood, all Flying Scots are fiberglass-constructed. Strict one-design class rules dictate how boats are built. The gelcoat (a pigmented resin) finish coat is first sprayed into the mold followed by hand-laid layers of chopped strand fiberglass mat and woven roving fiberglass cloth. Flying Scots have always been built with a balsa-wood-cored composite of the hull and deck. Woven roving is used on both sides of the balsa in the hull layup.

The hull and deck are joined, in a shoebox fashion, using bolts on 12-inch centers and then additionally joined on the inside with fiberglass cloth and resin. This results in a very strong, stiff hull and deck, albeit relatively heavy. As testimony to the strength of its boats, Flying Scot proudly boasts that hull #1, built in 1957, is still going strong. Class rules prohibit Flying Scots from having auxiliary power, and most have none. For sailors who are not competing, a small gas or electric outboard can be mounted on a transom bracket.

Although the Flying Scot may not cause as many white knuckle moments as Douglas’s Thistle and Highlander models, that is not to say her performance is boring or sluggish. Typically raced by a crew of three with a mainsail, jib and spinnaker, the Flying Scot easily planes when reaching and running in a stiff breeze—there are few sailing experiences more exciting. For daysailing, the Flying Scot easily accommodates a family of five or six. There are active Flying Scot fleets throughout the country, and new owners are likely to find plenty of great sailors willing to welcome new sailors to their ranks and to share their knowledge and experience.

In January 2008, the price of a new Flying Scot, with what the company calls the “Family Package,” was $15,900 and included everything you needed to go sailing plus a galvanized trailer. Used models can be found on websites, sailing club bulletin boards, and classified ads for as little as a few thousand dollars. You may want to refurbish an older model yourself, have Flying Scot do the job for you, or purchase parts from Flying Scot and split the workload. A complete list of available parts and their cost is available on Flying Scot web site at www.flyingscot.com.

Few would argue that many of the best sailors in every aspect of the sport began as dinghy sailors. It would be hard to beat a Flying Scot as the place to start.