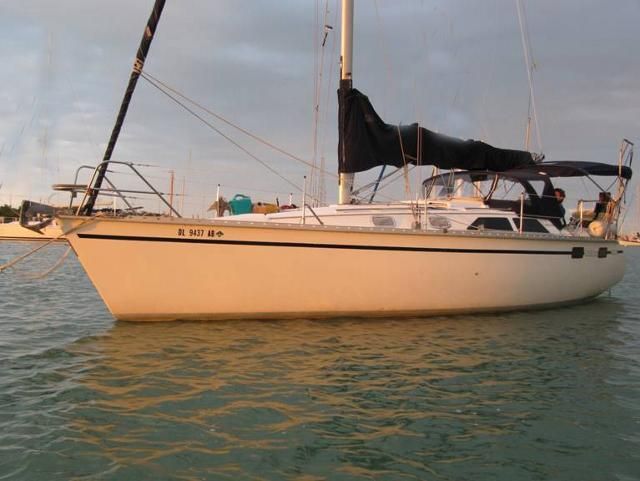 At the recent United States Sailboat Show in Annapolis I was approached by a fellow sailor with several questions about a particular boat I had recently written about. He had concluded from my article that I didn’t like the particular model boat and he was looking for information that, in his words, would have been "too sensitive to publish". I am critical from time to time of some boats, and less than enthusiastic about others, but this encounter caused a little concern for how my reviews may be perceived.

Generally I try to present a balanced, objective look at boats and point out the good as well as bad points I’m aware of. If I didn’t feel a boat’s strengths outweighed its weaknesses, I wouldn’t waste the time to research and write about them.

I can see the letters now: "Dear Jack, What boats wouldn’t you write about?" OK, I’ll never write a review of the Buccaneer 285 but that’s as far as I’m willing to stick my neck out now.

From the beginning, Hunter has concentrated on keeping their boats affordable while, at the same time, providing maximum accommodations for a given length. The Legend 35/35.5 remains true to the company’s focus on offering one of the least expensive 35’ boats on the market and, at the same time, providing outstanding family cruising accommodations.

The model was introduced as the Legend 35 in late 1986 replacing Hunter’ s hugely popular 34’ model. In the middle of the 1989 model year the designation was changed to the Legend 35.5 after several modifications of the deck mold and the interior arrangement. Production ended with the 1995 model year.

Construction of the Legend 35/35.5 follows Hunter’s long established method of solid laminate fiberglass hulls with a fiberglass structural grid system to strengthen them. Hunter was a pioneer of this method of modular construction and I haven’t seen any significant structural concerns over the years. However, I think it’s important to keep in mind this method of construction prevents inspection of many areas of the boat, and small problems have the potential to go undetected until they become big ones. The deck is cored with balsa wood, and the deck and hull are joined on an outward turning flange with an aluminum toe rail and stainless steel nuts, bolts, and washers.

In preparation for this review I pulled the files on five Legend 35s we have surveyed in the past two years to get an idea as to some common problems. The models ranged from 1988 to 1991 and all had some degree of osmotic blistering below the static water line or had undergone significant remedial repair. All had some degree of delamination and elevated moisture of the deck structure. Where the jib furling lines run through the foredeck on the 35.5 model is a common and persistent source of water penetration into the deck core. Two of the five had significant delamination of the rudders.

There is a potential problem with the thin-gauge aluminum waste holding tank that has a life expectancy I would put at ten years maximum. It’s a good idea to replace them before they fail.

For most, what attracts them to the Legend 35/35.5 is price and the accommodations it provides a family. With the Legend 35/35.5 both are tough to beat with any 35’ model. The general layout of both models is the same with v-berth cabin forward followed by a portside dinette and starboard settee. At the aft end of the cabin there is a port galley and starboard head. There is a navigation station between the head and the settee and a double quarter berth cabin aft along the port side.

Although the layout is the same, there were several modifications of the arrangement between the 35 and the 35.5 models. The 35.5 model offers a larger dinette, larger head and smaller navigation station. The quarter berth cabin of the 35.5 offers more room to move about, and there is a huge 7’ by 5’ athwart ship berth rather than the fore and aft berth on the 35 model. Athwart ship berths are rather useless at sea, but dockside and at anchor this makes a great owner’s stateroom.

Auxiliary power is provided by a Yanmar 3GM diesel engine. The engine is rated at 24 hp at 3400, which is more than sufficient.

Sailing performance is very respectable particularly in light to moderate air. The rig is fractional and most boats were sold with a mainsail and 120 jib as standard equipment. A larger headsail and cruising spinnaker are nice to have for beam reaching and running in light air, but many owners find the mainsail and 120% jib work just fine.

The Legend 35 is not without a few faults that will likely need repair in order to maintain the boat’s value and salability. On the other hand, and in the eyes of many, sailing fun, excellent accommodations, and an affordable price outweigh these minor faults. The Hunter Legend 35 scores well on all these points.

Reviewed in the December 1999 issue of SpinSheet by Jack Hornor