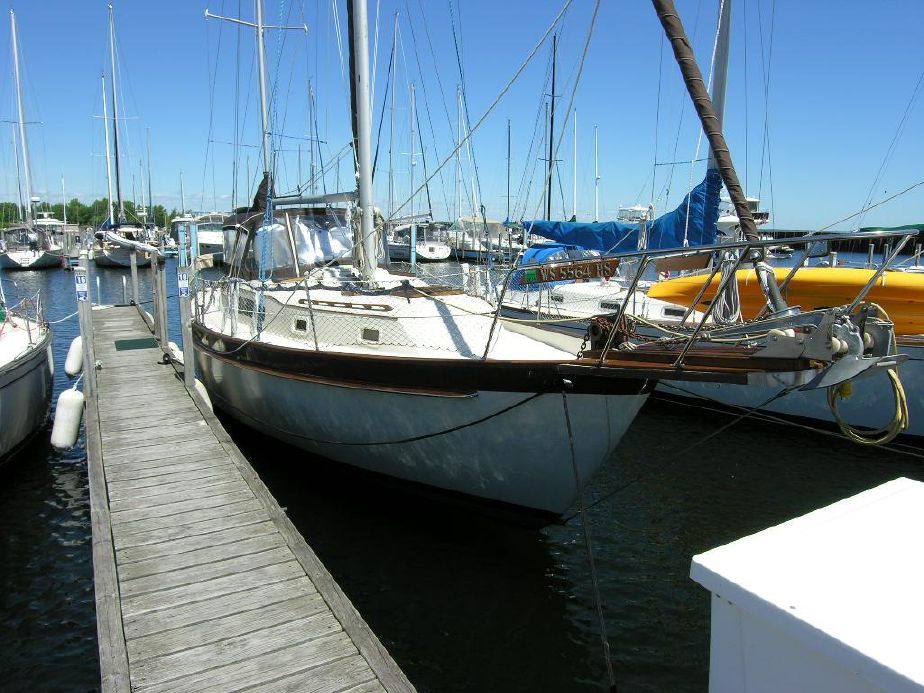 If cost were never a concern of boaters, we would undoubtedly all choose to own boats that were beautifully built, finely finished, fast, and always sailed perfectly balanced. However, in the real world, most of us don’t have unlimited budgets and cost is a primary consideration in our purchase decisions. Long ago Irwin Yachts recognized the cost considerations of the average boat buyer and, quite frankly, compromised on the quality of fit and finish to offer boats that were carefully priced, well advertised and widely sold to a very broad spectrum of customers. The Irwin 37 a roomy, appealing, center cockpit cruising design introduced in 1971, is no exception to this broad generalization of Irwin Boats.

Between 1971 and 1982 more than 600 of these boats were sold. The Irwin 37 was offered with three different sail plans: sloop, cutter and ketch as well as three underwater configurations; shoal draft at 4’, standard draft at 5’6" and keel centerboard version which was the same as the shoal draft version but with a center board that extended to 8’ with the board fully down. Early production 37s were built with no bow sprits. The lack of this feature tends to accentuate the high freeboard and expansive topsides of these models. While the addition of a bow sprit did wonders for the 37’s aesthetics, the fiberglass appendage caused a degree of problems ranging from minor gelcoat cracks to structural failures in the area of the attachment when the rig was stressed. The final version of the Irwin 37 used a welded aluminum bow sprit which seemed to be less prone to problems than the fiberglass bow sprits.

The hull of the Irwin 37 is constructed of a solid laminate of various types of fiberglass cloth and polyester resin. Decks are constructed of fiberglass, resin and a balsa wood core. The deck to hull connection consists of overlapping flanges joined with a polyester bedding compound and self-tapping stainless steel screws on 6" to 8" centers. The rigging chain plates are stainless steel webs laminated in place during hull lay-up. By general industry practice, construction of the Irwin 37 would be considered on the light side for a boat of this size.

Problems commonly found on examination of Irwin 37s include deteriorated deck core resulting from poorly bedded deck fittings, damage to the lightly constructed deck to hull joint from minor impacts with docks and pilings and indentations in the bottom that resulted from placing inadequately cured hulls on building cradle stands. Fiberglass print-through, a cosmetic condition where the pattern of the underlying fiberglass cloth is visible through the finish coat, is common on many older 37s. This problem was considerably reduced with later model boats with the use of Cormat between the gelcoat surface finish and the fiberglass cloth material.

Clearly the strongest point of the Irwin 37 is its lay-out, livability and considerable storage offered on a 37’ boat. The layout of the 37 generally remained unchanged throughout its production. There is a spacious aft cabin reached via a port side passageway from the mid-cabin main saloon, a separate galley to starboard and aft of the main saloon and a v-berth stateroom forward. There are two heads, one next to the aft stateroom and one between the main saloon and forward stateroom. Both are complete with showers. One minor annoyance is the fact that the ice box is located along the port side of the boat in the passageway between the aft cabin and main saloon. This is quite remote from the galley area. The inconvenience is offset by the large size of the ice box.

Preferably, the boater, to whom the Irwin 37 appeals, will consider sailing characteristics as secondary to other considerations. As indicated above, the 37 was offered in a variety of underbody and rig configurations. In any configuration, this is a boat that may be best suited to motorsailing. For optimum performance consider the cutter rig and deep draft configuration. Even so, do not expect too much of the windward performance. Steering of the 37 is generally slow to respond and quite spongy due to the long routing of the steering cables.

What the 37 lacks in construction detail and sailing performance she more than makes up at bedtime and at anchor. Large comfortable berths and spacious cabins make this a very comfortable boat dockside and at anchor. Although not generally recommended for bluewater cruising, the Irwin 37 is a lot of boat for the money. If upgraded to current standards for plumbing and electrical systems the Irwin 37 should be suited for coastal and Bay cruising.

Reviewed in the October 1996 issue of SpinSheet by Jack Hornor