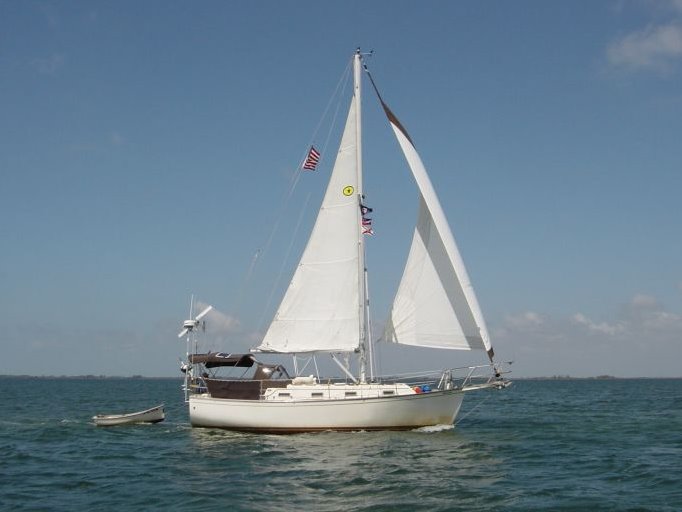 This month seems an appropriate time to take a look at the Island Packet 31, which was introduced 15 years ago at the 1983 United States Sailboat Show in Annapolis.

This traditional catboat-styled design which features a sweeping sheerline, stubby bow, nearly vertical transom and considerable beam was a bit of a risk for Island Packet because many sailors have strong feelings, one way or the other, regarding the aesthetic appeal of traditional designs. However, the risk paid off. The 31 established Island Packet’s firm hold on this segment of the market, and the company survived and even prospered during a time when many long time builders were forced to close their doors. The Island Packet 31 remained in production until 1989 when it was replaced by the Island Packet 32. In all, 265 boats were sold, many in the Chesapeake Bay area.

Although this model is known as the Island Packet 31, the length on deck is actually 30’ 7". As is the case with all Island Packet monohulls, a bow pulpit extends the overall length which, for the 31, is 34’ 4". Beam is considerable at 11’ 6" and, in plain view, it is apparent the point of maximum beam is forward of midship. This "Cod’s Head" style was typical of late 19th and early 20th century designs, but is not common on modern designs. (The Island Packet 32, which replaced the 31, shows a much more standard distribution of volume for a modern vessel and is likely a better performer.) Standard draft of this full keel design is only 4’ and, for those who are really into gunkholing, about 10 percent of the 31s were built with centerboards drawing only 3’ with the board up. Displacement is 11,000 lbs., and ballast is indicated at 4,500 lbs. for both the centerboard and standard draft models.

Construction of the hull of the 31 is a solid laminate of fiberglass cloth and polyester resin. There is considerable use of molded fiberglass liners, which obstructs access to many areas of the boat and complicates repairs. However, with proper engineering and adequate quality control during construction, this is a strong and cost effective method of production. Island Packet does a good job of both, and I have yet to find any significant structural failure of an Island Packet hull that resulted from poor design or workmanship. A unique feature of all Island Packet boats is the method of deck construction. Instead of using balsa or foam core material, Island Packets use their own "Polycore," which is a mixture of resin fillers. I have no information on how this compares in weight and strength to well-documented and more traditional core materials, but, again, I have yet to run across any serious delaminations or failures. Ballast is encapsulated iron, and centerboards have a small amount of lead weight, which seems more intended to keep the board down than to have any significant effect on stability.

For the first year and a half or so of production, auxiliary power was provided by a 22 hp Yanmar. This was updated to a 27 hp Yanmar the second year and was more a decision of the engine manufacturer than the builder. Yanmar replaced their 3GM22 model with the 3GM30 model in 1985, essentially the same engine optimized for a little more horsepower. Either engine should provide adequate power under most conditions, although the 27 hp model will provide a little more push through strong currents or choppy seas.

Make no mistake about it, the Island Packet 31 is a cruising sailboat, although under certain conditions her performance can be quite respectable. The 31 was offered as a sloop or with a double headsail arrangement, commonly called a cutter. This is more accurately a double-headsail sloop, but that is nit-picking. For most coastal cruising conditions the sloop would be the preferred rig on this size boat but, perhaps for aesthetic reasons, most were rigged with the double headsail arrangement.

It would be impossible to design a boat with shallow draft, a full keel, considerable volume forward and have it sail efficiently to weather by modern standards. In this regard the IP 31 is no surprise. However, the sail area/displacement ratio of 17.2 provides adequate power, and the considerable beam provides initial stability to carry sail which translates to quite good reaching performance when the wind picks up to 12+ knots. Downwind performance is hampered by considerable wetted surface. Although performance is acceptable if the wind is above 10 knots true, and, when it really blows, the boat tracks and handles nicely.

The accommodations and livability of the IP 31 may be matched, but can’t be beat on a 31’ boat. The arrangement is fairly straightforward, with V-berth forward followed by a starboard side head, opposing settees in the main saloon, port side galley, starboard side quarter berth and navigation station. The 11’6" maximum beam and wide waterline beam allow accommodations to be pushed outboard providing plenty of livable space. The galley is U-shaped and is the size found on 35 to 38 footers. There is a clever arrangement for the quarter berth and navigation table that allows the chart table to be flipped up, and a folding door to be extended for an enclosed quarter berth cabin. Newer model boats offered a cockpit shower, stern rail gate with swim ladder and metal rather than plastic ports. All were nice improvements.