Recently, at the 18th Chesapeake Sailing Yacht Symposium, a friend mentioned he had read my review of the Express 37 and was disappointed that I hadn’t given the boat more credit as a viable cruiser. Later, I passed on these comments to another friend who responded that he had read the same article and felt I had given too much credit to the boat’s cruising capability. 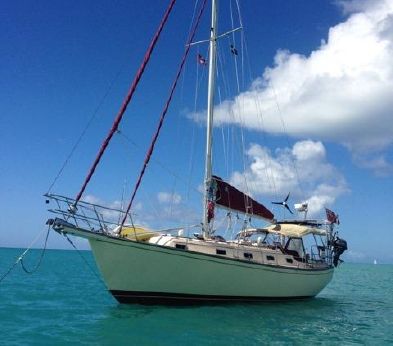 Over the years, Island Packets have had their cruising capabilities consistently praised and sailing performance occasionally questioned in print, but regardless of what is said by those of us privileged enough to have our opinions and observations about boats published, Island Packet owners are tremendously loyal. And, I have never met an owner who did not think that his boat’s plusses far outweighed any minuses. This is an endorsement enjoyed by only a select group of boatbuilders.

The Island Packet 35, designed by MIT-educated naval architect and company President Bob Johnson, was introduced in 1989, and it remained in production through 1994. In 1997, a slightly modified Island Packet 350 was introduced, but to avoid any possible confusion, I will confine my comments to the earlier of the two models.

I would characterize this design as a conservative, traditional cruiser that is likely to appeal to sailors more interested in comfort than speed made good to weather. The design has quite high freeboard and a high cabin trunk, but these features are disguised by a beautifully drawn sweeping sheerline and bowsprit, which make the boat look longer and lower than it really is.

The hull form is what I term a “modern” full keel, which is to say that, rather than having the wine glass midsection shape of a traditional full keel vessel, it has a modern canoe body combined with full length “fin-like” keel. The base of the rudder is connected to the keel with a stainless steel strap but is not attached in the same sense as traditional design. While this design style suffers from the same high-wetted surface area of traditional full keel models, it provides a more efficient, higher lift keel. Initial stability is improved by a wider waterline beam and less hollow sectional shapes. Water flows with less turbulence to the propeller for more efficiency under power, and a larger rudder, without extreme angle, is more efficient.

Standard draft of this full keel design is only four feet and six inches, although a keel/centerboard option was offered, which draws only three feet and eight inches with the board up. Unless extremely shallow draft is your number one priority, I believe you will find the disadvantages of minimal draft outweigh the advantages. Another factor to consider is that although the on-deck length is only a bit more than 35 feet, she is actually 38 feet long overall and will require an appropriately sized slip.

Hull construction of the Island Packet is a solid laminate of fiberglass cloth and polyester resin. Hull finishes utilize two different types of gel coat resin, one highly resistant to blistering below the waterline and a second high gloss above, which is only available in one color and accounts for all Island Packet’s distinctive light ivory hull color.

The hull is strengthened with a structural grid system and molded liners held in place with fiberglass or structural adhesives. The deck and hull are sealed and bolted together on an inward flange. Island Packets are very solidly constructed and offer a 10-year warranty, and I have yet to find any significant structural failure of an Island Packet hull. That said, rudder delamination and separation is a problem quite common to a number of older Island Packet models including the Island Packet 35 and should be closely inspected and monitored.

A unique feature of all Island Packet boats is their method of deck construction with "Polycore," a mixture of resin fillers, rather than the more common balsa or foam core. While I have occasionally noted minor separation of the fiberglass laminate from the core on older models, I have yet to run across any serious delaminations or failures, but this is something to keep an eye on.

The accommodations are straightforward with V-berth forward followed by a port side head, opposing settees in the main saloon with an aft-facing navigation table at the aft end of the port settee, a large starboard side galley and a port quarter berth cabin. The 12 foot maximum beam and wide waterline beam allow accommodations to be pushed outboard providing plenty of livable space and good storage that’s tough to match on a boat in this size range.

Auxiliary power was provided by a Yanmar 3GM diesel engine coupled to a fixed three-blade prop. Access for routing service and maintenance is good, and these are long-lived durable engines when properly maintained.

While the Island Packet 35 offers considerable performance improvements over some of the company’s earlier models and has won an occasional race when sailed under ideal conditions, I think it’s fair to characterize the Island Packet 35 as a stable, comfortable cruising boat with no pretense at being a “performance cruiser” or contender on the racecourse. She is cutter-rigged, which has some advantages for extended passagemaking and sailing in extreme conditions, but few, if any, advantages for daysailing and coastal cruising.

Light air performance suffers from a very conservative sail area displacement ratio of 15.2; although, you will occasionally see this figure given as 17.4. The higher number results when Island Packet’s published sail area of 735 square feet is used for the calculation. Island Packet‘s literature clearly indicates the published sail area includes the staysail, which should not be included when calculating SA/D ratio.

Compared with entry-level, 35-foot production cruisers, the Island Packet 35 tends to be a bit pricy. The asking price of 20 boats offered for sale at the time of this writing ranged from $99,000 to $159,000. The average selling price of eight boats sold over the last year was $119,000. For coastal cruising and livability aboard a 35-footer, this model has a lot to offer, and the prices reflect Island Packet’s popularity and reputation for solid construction.