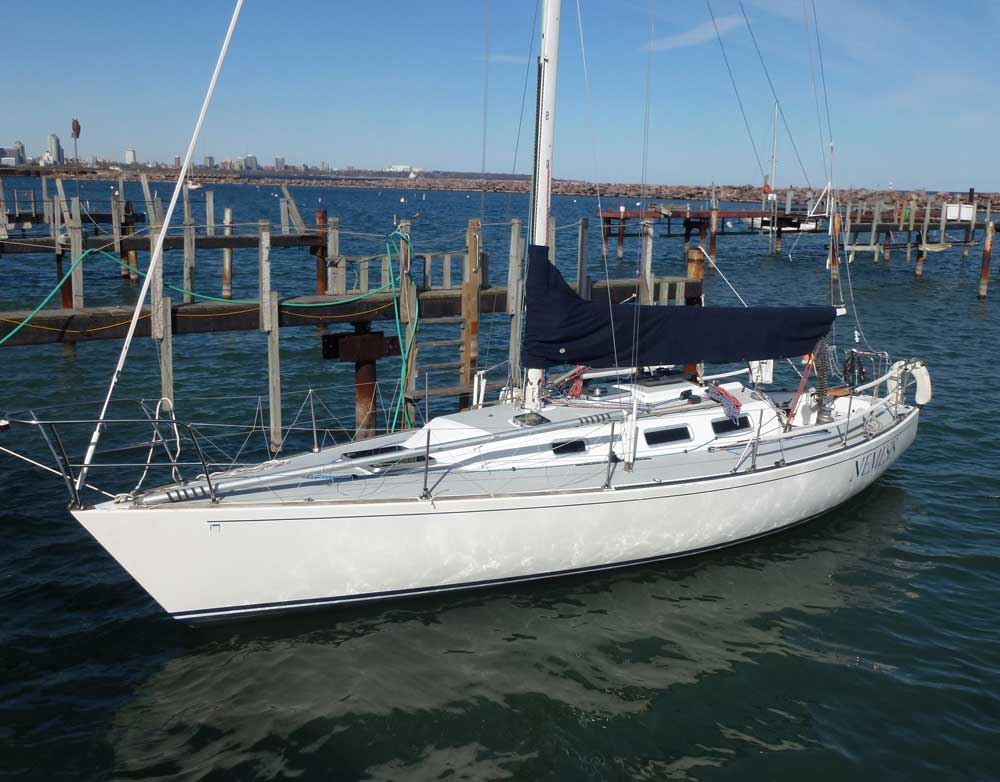 Recently the J/35 was honored with induction into Sail America’ s American Sailboat Hall of Fame. Sail America has selected only 16 boats to be so honored since the Hall of Fame was founded in 1994. The selection committee considers boats for this honor that were introduced to the boating market at least 15 years prior to their induction and have "earned lasting recognition by fostering new enjoyment and growth in the sport of sailing through excellent design and product ingenuity" .

The J/35 was first introduced in 1983 and, like her predecessors the J/24 and J/30, the design paid little attention to, and gave regard for, the rating rules of the day. The J/35 has become one of the most popular one-design racer-cruisers ever built. And, somewhat ironically, it has also become the most popular racer-cruiser rated under the IMS rule, as well as a perennial club winner under the PHRF rule. The principal dimensions of the J/35 are 35’ 5" LOA, 30’ LWL, 11’ 8" beam, 6’11"draft and 10,000-lbs. displacement.

As are all U.S. J-Boats, the 35 was built by Tillotson-Pearson International (TPI), a company with a long history of excellence in fiberglass composite construction. Both hull and deck are constructed with end-grain balsa wood core material between layers of biaxial and unidirectional fiberglass cloth. TPI was one of the first production boat builders to utilize these materials that allow the builder to align the direction of the strands of fiberglass cloth to the forces that occur under load. The result is generally a stronger composite for a given weight.

One negative of cored construction is that the core material is subject to being contaminated by water intrusion, which results in rapid deterioration of balsa wood, delamination and ultimately failure of the composite. For this reason, repairs or attachments through a cored composite must be undertaken by a knowledgeable repairer.

The J/35 has a unique fiberglass main bulkhead that provides athwartship strength as well as support for the rigging loads. There are several fiberglass floors to support the mast step and keel bolts for the external lead keel. The deck and hull are securely bolted together.

Quite remarkably, even older J/35s that have been driven hard and put away wet for a number of years reflect little evidence of structural problems. Osmotic blistering is common on older models if remedial measures have not already been undertaken. Hulls built after 1988 were built utilizing vinylester resin on the outer layer of laminate, and the company began offering a 10 year transferable warranty against blisters. Other annoying problems to look for on older boats include leaky ports, delaminated and water saturated decks around genoa track and other hardware attachments, and loose and leaking lifeline stanchion bases.

By comparison with a 35-foot cruising boat, the interior accommodations of the J/35 would have to be considered Spartan at best, and some will find the lack of standing headroom forward of the main saloon unacceptable. However, the large cockpit and open decks make for an ideal daysailer, and the interior is certainly workable for short-term cruising. There is a V-berth forward which was optional on early boats and has been eliminated by others in order to reduce weight. The V-berth is followed by a port side head and starboard hanging locker. There are port and starboard settees in the main saloon. Galley accommodations are minimal with a small stainless steel sink and two-burner stove aft along the port side and an icebox/navigation station to starboard. There are two good size quarter berths aft.

Auxiliary power is provided by a three-cylinder Yanmar diesel engine that was originally rated at 22 horsepower and, after slight modifications, was redesignated 28 horsepower after 1985. Boats were originally equipped with a Martec folding propeller. The engine provides plenty of power for the boat and is easily serviced and maintained.

No athlete makes it to the Hall of Fame unless she or he is exceptionally good at what they do. The J/35 made it to the Hall of Fame on the first ballot and there is not much more that can be said about her sailing performance. The boat balances well on all points of sail and responds quickly to the tiller (some models have been fitted with wheels) and, unlike many high performance boats, the J/35 is quite forgiving of mistakes that may be made by the inexperienced helmsman or crew.

Production of the J/35 ended in 1994, but between 1983 and 1994 more than 330 hulls were built and there seem to always be a number of boats offered for sale. Because most of these boats were actively raced, the price of used models depends considerably on the condition of the boat and how up-to-date its sails and equipment are.

Perhaps the biggest drawback of the J/35 for Chesapeake Bay area sailors is its nearly 7-foot draft which will undoubtedly restrict access to some areas. However, if you’ re interested in excellent performance, quality construction and very competitive sailing at a reasonable cost, the J/35 is worth a very serious look.

Reviewed in the November 1999 issue of SpinSheet by Jack Hornor