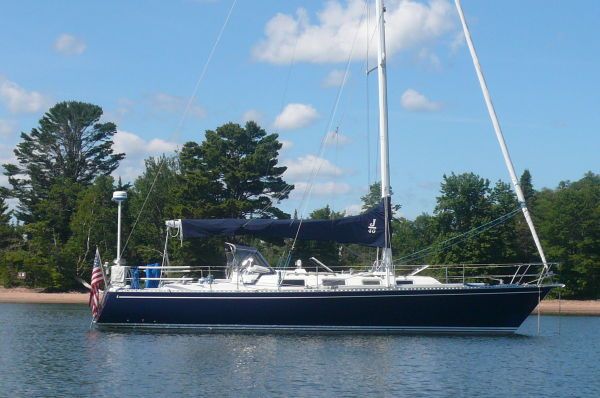 The J/40 was introduced in 1985 (1986 model year) to great fanfare and expectation. It was "Boat of the Year" in national magazines in 1985 and again in 1986. More than 30 were built in the first year of production, and more than 100 were built over the 10-year production run from 1986 through 1995. Some sailors feel the J/40 set the standard for modern fast cruising sailboats; others will argue that honor goes to Perry’s Valiant 40, and those of us on the leeward side of middle-age are likely to think the honor belongs to Lapworth’s Cal 40. No matter what your perspective or opinion, time has proven the J/40 able to live up to the hype, and it’s likely to hold a place in yachting history alongside the likes of these and other notable designs.

I have at least a half-dozen advertisements and brochures on the J/40 in my files, none of which seem to agree precisely on the boat’s dimensions. My best sources suggest an overall length of 40’ 3", a water line length of 34’, a beam of 12’ 2", and a reasonable displacement of about 17,600 pounds. The J/40 was offered with a shoal draft keel drawing 5’ and a deep draft keel drawing 6’ 5".

The rig is a low aspect sloop with 773 square feet of sail area. The larger mainsail and smaller headsails are more easily managed by a short-handed crew. The rudder is a large, partially balanced spade that provides excellent steering control. Although originally intended as a multi-purpose boat for cruising and racing, the current popularity of this design seems to be among performance-oriented cruising sailors.

Construction of the J/40 uses no exotic or ultralight materials and follows J-Boat’s history for use of sensible materials and proven methods. Both the hull and deck are constructed with balsa coring which results in very good strength-to-weight ratios. I am a believer in the advantages of cored composites, but balsa wood does rapidly deteriorate if moisture is allowed to contaminate the core, and extreme and repeated high loads can lead to debonding of the fiberglass laminate from the balsa core. Either condition can result in a severe structural weakening of the composite. In general, J/40s seem to be holding up well, and when I recently inspected one of the first of the 1986 models for a prospective purchaser, I found only a few potential core problems at attachments of deck fittings and at penetrations through the deck around the chain plate.

With only one exception, I think the deck arrangement of the J/40 is near perfect for a cruising boat. The foredeck is large and uncluttered but is the source of my only fault with this arrangement -- there is no foredeck anchor locker. Instead there is a large anchor well to the starboard side of the cockpit. This is fine for storage of a stern anchor but I much prefer access to forward anchor rodes and chains from on deck. Otherwise, the side decks and cabin top are well laid out for sailing efficiency, and the T-shaped cockpit has comfortable seating for the crew, separated from the helmsman by the traveler. The mainsheet, traveler and jib sheet controls are all within reach of the helmsman, which is convenient for single-handing or just letting the crew sit back and enjoy the ride.
I am also fond of the interior arrangement of the J/40, but again with one exception. According to J Boats’ literature, the interior was designed for the privacy of two cruising couples, and undoubtedly this is why they have included two heads in this arrangement. In my opinion, there is little justification for the forward head, and the space would be better utilized to expand the livability and storage space of the forward cabin. The main saloon is large, open, and comfortable with an L-shaped settee to port.

On early models the dining table drops down from the forward bulkhead, and on later models there is a centerline drop-leaf table. There is a second settee to starboard. The galley is aft to port, and, although counter space is limited, it is efficient, and the sink is on centerline where it is most efficient. There is a good-sized navigation station opposite the galley, although, on early model boats, there is no seating, so the navigator must stand. To the starboard side of the companionway is a double quarter-berth cabin, and to port there is a large head with integral shower and a much-appreciated wet locker for hanging foul weather gear.

Original auxiliary power was provided by a 43 hp Volvo engine on pre-1993 models and a 47 hp Yanmar on later models. Either is quite suitable considering the displacement of the boat. The most remarkable aspect of the engine is its location below the galley sink, almost directly in the center of the boat. This is the ideal location for proper weight distribution and has the added advantage of moving the heat and noise away from the sleeping quarters.

I don’t know of anyone who has ever sailed a J/40 and not found it to be an easy boat to sail under almost any conditions. Large headsails are not necessary for good performance; in fact, the J/40 sails quite well under mainsail alone. The J/40 has a moderated sail area-displacement ratio of 18.3 and is quick and responsive even in light air conditions.
The displacement-length ratio of 200 is a bit low, and the motion will not be as comfortable as a heavy displacement cruiser in severe conditions, but what is comfortable in severe conditions? I averaged the stability index of seven IMS-rated J/40s and found it to be 120.8 degrees, which is quite good and suggests a capable offshore design.

The draft, even at 5-feet for the shoal draft model, makes the J/40 less than the perfect boat for the dedicated Chesapeake Bay cruiser, but the sailing characteristics of this boat are hard to beat, and for those less inclined to gunkholing, this should be an ideal coastal cruiser. With some minor modifications, such as more substantial opening ports, added handholds in the cabin and increased tankage for fuel, the J/40 could be suited for some serious bluewater cruising.

Reviewed in the July 2001 issue of SpinSheet by Jack Hornor