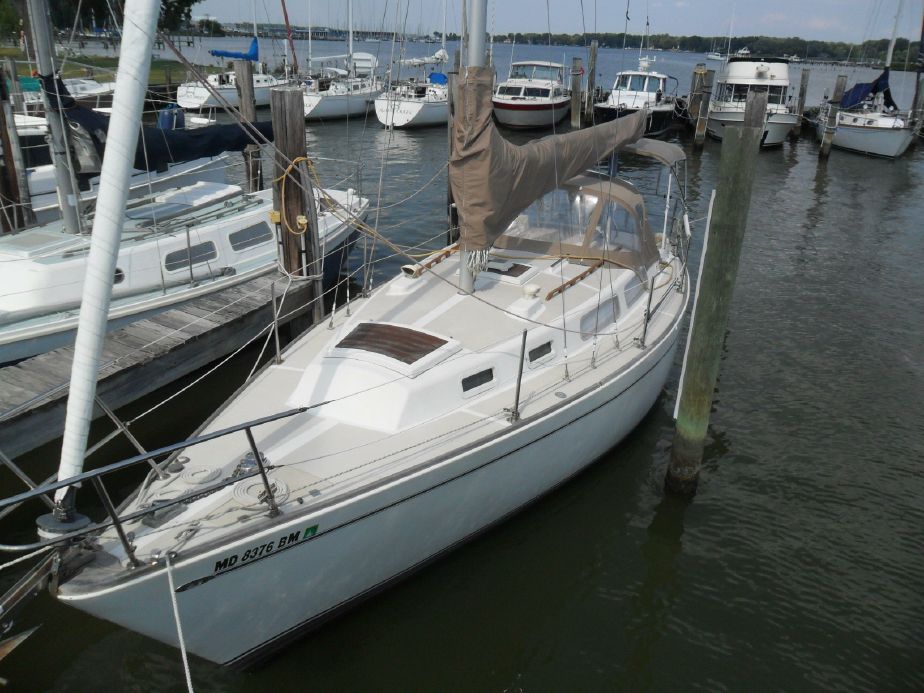 Although many one-design sailors are familiar with Lippincott Boat Works of Riverton, NJ, this is not a particularly well known builder among most cruising sailors. One of only two cruiser models ever built by the company, the Lippincott 30 is a comfortable, well-built boat that offers good sailing characteristics. And, because its builder is less well known, it is typically priced below other builders of similar quality boats.

Lippincott Boat Works was founded in 1946 by brothers Howard and Robert Lippincott, and throughout most of the company’s 40-year history, they built one-design racing sailboats. Some of the best sailors in the world—Tom Blackaller and Dennis Conner to name only two, and some less notables, such as yours truly—have competed and won in Lippincott-built Comet, Lightning, and Star class one-design boats.

The Lippincott 30 was designed by Howard “Skip” Lippincott Jr. and was introduced in 1979. It remained in production until the mid-1980s although fewer than 100 boats were produced. The design features 1970s-era contemporary styling and a moderate approach to sailing performance and cruising comforts.

The Lippincott 30 hull is solidly constructed of hand-laid fiberglass laminates. Because all were built before it was common to use vinylester resin for exterior finishes, some elevated moisture below the waterline is common, although I have not run across any cases of extreme osmotic blistering.

In lieu of fiberglass liners for structural reinforcement, Lippincott opted for the more traditional method of wood structural components. Full and partial plywood bulkheads are bonded to the hull with fiberglass cloth and resin in accordance with good boat building practice, and it is rare to find serious structural problems with these boats.

Decks and cabin structures are built with a balsa wood core between fiberglass laminates. Considerable care was taken by the builder to ensure hardware was well-bedded, and serious deck problems are not typical. The deck and hull are joined on an inward hull flange with adhesive sealant, nuts, bolts, and washers. The quality of construction and finish is well above that of most moderately priced, production boats. If I have any complaint, it’s the fact that flat washers, rather than more substantial backing plates, are used for the attachment of deck hardware.

The foredeck of the Lippincott 30 features a narrow and deep anchor locker that stores a Danforth-type anchor vertically rather than the more traditional broad, flat anchor lockers. The only drawback to this arrangement I can see is that the shape would not accommodate a plow type anchor. Standard equipment includes a welded stainless steel bow rail, double life lines supported by stainless steel stanchions, and a welded stainless steel stern rail with a built-in swim ladder. Two fiberglass composite deck hatches, one forward of the mast and one aft, were also standard equipment. A small teak toe rail at the deck edge offers added security.

The cockpit seats four adults comfortably, and the pedestal-mounted wheel steering was standard equipment. There are a large locker below the port cockpit seat and a small but deep locker at the aft end of the starboard cockpit seat. This second small seat locker is unusual on a 30-foot boat with a quarter berth and provides handy, cockpit-accessible storage.

The arrangement of the Lippincott 30 is typically described as “sleeping six”—two in a V-berth, two in a pull-out starboard settee, one in a fixed port settee, and one in a starboard quarter berth aft. While this may be accurate, if four of the six are young children, the Lippincott 30 provides what I would describe as acceptable accommodations for four adults or a family of five. The V-berth provides good length but is very narrow at the forward end. The settee berths in the main saloon are barely over six feet long, and the starboard settee is not wide enough for two adults.

The main saloon and V-berth cabin are separated by an athwartships head. There is a relatively large galley to port of the companionway.

The interior is very nicely finished with an abundance of mahogany veneered plywood, a teak and holly cabin sole, and varnished mahogany trim. Hull sides of the V-berth and quarter berth are finished with a mahogany ceiling for a luxurious, traditional look that isn’t possible with fiberglass liners.

Auxiliary power is provided by a 13-hp, two-cylinder Yanmar diesel with reasonably good access for service. While this may be a bit underpowered for severe conditions, it is sufficient for most likely situations.

Other than one brief sea trial, I have not had an occasion to sail the Lippincott 30, but all owners I have spoken with report good performance and no bad habits. The sail area/displacement ratio of 17.3 and displacement/length ratio of 246 are indicative of a boat that should be easily handled, yet provide good performance in a variety of wind conditions. Shoal and standard draft models were offered, although standard draft is still less than five feet. Ballast on both is 4000 pounds, which is 47 percent of the total displacement, and combined with 10-foot beam, should make for a fairly stiff boat.

There are several Lippincott 30s offered for sale at any given time. I found four current offerings with asking prices ranging from $19,000 to $27,500 and three recent sales with an average selling price of $21,500.

Selling prices are only slightly higher than a comparable aged production boat such as a Catalina 30, and the higher quality of construction and finish make the Lippincott 30 worth a serious look for sailors in the market for a boat in this age, size, and price range.

Reviewed in the September 2007 issue of SpinSheet by Jack Hornor