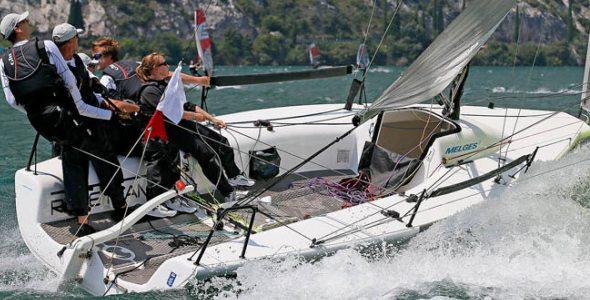 For many one-design racers, pitting their skills against the competition, in (theoretically) equal boats, is the ultimate challenge of their sport. Speed, these purists would argue is relative; they insist that all that is needed for their sailing enjoyment is equality in everything but the skipper and crew.

On the other hand, are the one-design sailors for whom the challenge is the boat, one that demands exceptional skill and teamwork. Boat speed and performance that demand split-second timing to compete, let alone win, are equally important factors for these sailors’ enjoyment. Popular choices of the latter include the likes of Finns, Lasers, 420s, Flying Dutchman, Tempests, J/24s and, a relatively new entry, the Melges 24.

While sailing legend Buddy Melges was off helping Bill Koch win the America’ s Cup in 1992, sons Hans and Harry III were left to run the family business, Zenda, WI-based Melges Boat Works. It had been more than 15 years since the introduction of the J/24, and, in that time, there had been a number of advances in boat design, construction, and materials. The Melges brothers seized the opportunity and began hatching plans for a new performance one-design. The result was the Melges 24 designed by the San Diego team of John Reichel and Jim Pugh who, not so coincidentally, were also the designers of Koch’s three America’s Cup boats.

The Melges 24 features a nearly flat bottom with a very firm turn at the bilge and considerable flare to the topsides. There is a dagger board-styled retractable keel with a foil-shaped bulb. The first prototype was introduced at Key West Race Week in January of 1993 and was an immediate winner. The rest, as the saying goes, is history.

Construction of the Melges 24 is clearly more "high tech" than preceding one-design race boats in this size category. Rather than standard, marine-grade E-glass fiber fabrics, the Melges 24 utilizes aircraft-grade S-glass fiber. Chemically the fibers are the same; however, the individual fibers of S-glass are finer, have a higher purity, and fewer defects. And, as a result, they are as much as three times stronger than E-glass fabrics are.

Melges uses vinylester rather than the more commonly used polyester resin. Vinylester resins have 100% greater elongation before failure and 25% greater tensile strength than polyester resins. The hull and deck are constructed with a closed-cell foam core and are joined with two part adhesives, so that there are no mechanical fasteners to loosen or leak.

The tiller, rudder, keel, and mast are all constructed with carbon fiber for ultimate strength and light weight. The result is a 24-foot boat that weighs a mere 1750 pounds yet is strong and stiff. For comparison, the J/24, at 3100 lbs., and the Cal 25, at 4000 pounds, were once thought to be real "lightweights" .

The deck of the Melges 24 is well laid out and simple. The dominant feature is a huge (13-foot-long), self-bailing cockpit open at the transom. The mast is stepped on a tabernacle base on the small deckhouse and is easily raised and lowered for trailering. The mainsheet traveler is on the cockpit deck just forward of the tiller. There are no winches, and the double-ended jib sheet is led through three-inch Harken ratchet blocks mounted flush on the deck. There is a roller-furling jib with the furling drum in a well on the foredeck. The asymmetrical spinnaker is flown from a 6-foot long, carbon fiber, retractable bowsprit and can be extended and retracted from the cockpit.

Cockpit and deck edges are well radiused for comfort when hiking out, and there is an 18” deep locker in the cockpit deck for storage of a small outboard motor, cooler, and fuel tank.

Although the manufacturer boasts a "modest custom molded interior that sleeps four," in reality the small cabin should be considered nothing more than a convenient place for storage of life jackets, sails when not in use, and perhaps a portable toilet.

Auxiliary power can be provided by a three horsepower outboard motor with a detachable mount that fits on the transom below the cockpit deck, although you many choose to sail the Melges 24 without the benefit of auxiliary power.

Performance under sail is, after all, what the Melges 24 is all about, and boat speeds of 20 knots in winds of 15 to 20 knots are not unheard of.

The Melges 24 has the advantage of 15 years of design and construction improvements on the J/24, and it is unfair but inevitable that comparisons will be made. It is hard to ignore the differences in several of the numbers commonly used to compare performance. For example, the sail area displacement ratio of the J-24 is 19.8 compared to 41.9 for the Melges 24, and the displacement length ratio of the J is a hefty 188 when compared to the Melges’s 75. This suggests awesome horsepower that results in thrilling, high-speed sailing.

On the down side, technology and high performance are not cheap. New boats can be purchased from Melges Boat Works (262) 275-1110. For those less flush, used models are generally available.

If you’re looking for fun in the fast lane and want to sail against some of the most competitive sailors around, the Melges 24 is tough to beat. It is probably best suited to experienced sailors willing to pay a premium to compete at this level in what amounts to a big "high tech" dinghy.

Reviewed in the June 2000 issue of SpinSheet by Jack Hornor