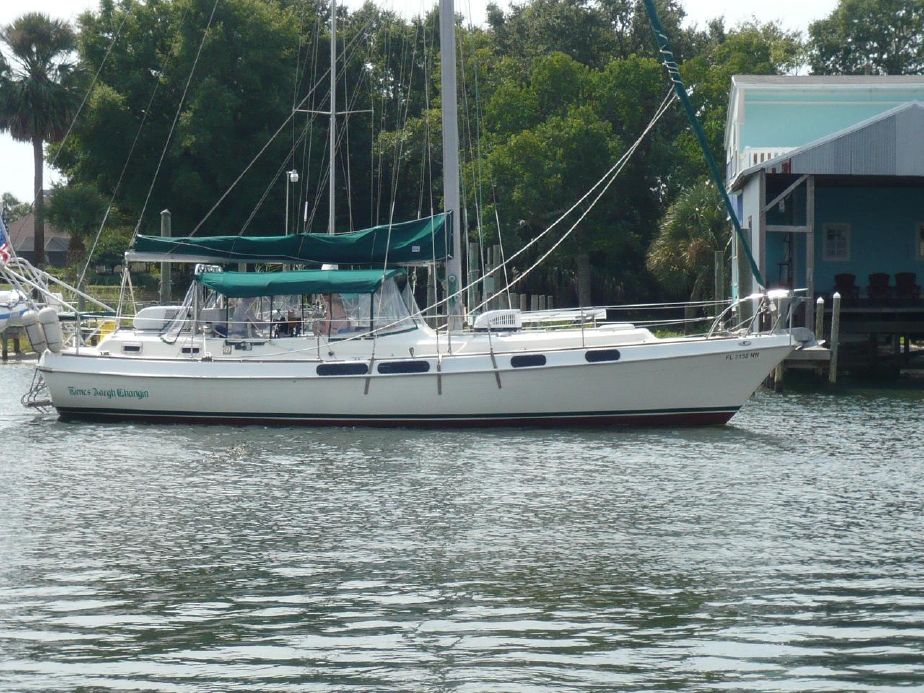 My reaction to the introduction of the Morgan Out Island 41 in 1972 was, to say the least, disappointment. At the time, I was working as an apprentice marine surveyor and although I had no formal training yet, I was a serious student of yacht design. Much of my spare time was spent studying the work of my favorite designers. I was a traditionalist, fond of the sweet sheer lines, near perfect balance, and classic elegance evident in the designs of Philip Rhodes, Bill Tripp, and Charlie Morgan. In much the same way that I felt Bob Dylan had sold out to pop culture by going electric, I felt Morgan had betrayed his traditional roots and sacrificed elegance and balance for volume and head room with his design of the Morgan Out Island 41. Well, times they are a changing. More than 25 years later, I have a whole different perspective on this design. Dylan did some pretty good stuff too. Pure traditionalists and lovers of all out sailing performance will still not be drawn to the pudgy appearance and less than stellar sailing performance of the Morgan Out Island 41, but time has proven that this is the most popular boat over 40’ ever built. More than 1,000 are still sailing all around the world. No comparable boat even comes close to this success. Conservative estimates suggest that 30 to 35 percent of the Out Island 41s went into the charter trade, and I think it’s safe to say more sailors have had an opportunity to sail this venerable cruising classic than any other boat over 40’.

The basic center cockpit design of the Out Island 41 offers three cabins: one forward, one mid-ship and one aft. Over the years the basic design never changed; however, the accommodations within the three cabin layout changed any number of times. The original design offered no below deck passageway between the main saloon and the after stateroom; however, in 1974, a walk-through area was incorporated into the design. As for cabin layout, a potential buyer can have almost anything he wishes provided he’s willing to take enough time to shop around. At one time or another, the galley was to port, to starboard, forward and aft in the main saloon area, and several different configurations of dinette seating were offered. The forward cabin offered upper and lower berths or large double V-berth. The aft cabin was offered with several sleeping arrangements ranging from an athwart ship double berth to king size fore and aft berth.

Over the years the engine compartment, located under the center cockpit deck, remained virtually unchanged. Several auxiliary engines were used, although the vast majority of boats came with Perkins Marine diesel engines. Early models were powered by Perkins model 4-108 engines or Westerbeke model 4-107 marine diesel engines. Morgan switched to Perkins 4-154 model engines later in production which provided a little more reserve horsepower for this heavy displacement boat. Following Catalina Yacht’s purchase of Morgan, the Out Island 41 Classic was produced for several years using a Yanmar diesel engine. The 41 Classic offered the same general layout and appearance as the original Out Island 41; however, the underwater profile was changed to incorporate a more modern long fin keel and a skeg hung rudder.

Structurally, the Out Island 41 is a very sound boat, and even at its advanced age, it is very rare to find any significant structural problems with these boats. Older Out Island 41s had the hull to deck joint well down on the top sides of the vessel where it was vulnerable to dockside damage as well as damage from travel lift slings. In 1975, the hull to deck joint was repositioned at the sheer deck edge, a more traditional and stronger method of construction. Polyethylene waste tanks and water tanks used aboard these vessels were subject to failure. Replacements were complicated by the fact that the tanks were set in place before the deck was put on, and replacement of comparably sized tanks is nearly impossible without major structural renovation. The solution, in many cases, has been to replace larger single tanks with several smaller tanks.

From early on, the Out Island 41 has had a reputation for mediocre sailing performance which is likely justified. When introduced in 1972, the design specifications of this boat indicated displacement of 24,000 lbs. and sail area of 683 sq. ft. This represents a sail area displacement ratio of 13.1. This is on the optimistic side. More than likely the full load cruising displacement of the boat was in the range of 27,000 lbs. rather than the designed displacement of 24,000. By 1981, Morgan literature reflects a more realistic displacement of 27,000 lbs. The sail area of the vessel had increased to 775 sq. ft. with the addition of a higher aspect sail plan. The Out Island 41 was also available with an optional ketch rig, and a few boats were built with optional centerboards. Generally, I find the performance of the Out Island 41 acceptable from close to broad reaching but disappointing sailing to windward or going dead down wind in light to moderate winds.

For boat buyers looking for an ideal coastal cruiser, live aboard, or island cruiser, on a limited budget, the Out Island 41 is a boat worth serious consideration. There are numerous variations on accommodations, and sound simple construction makes this boat an ideal candidate for customizing to your own particular cruising needs.

Reviewed in the September 1996 issue of SpinSheet by Jack Hornor