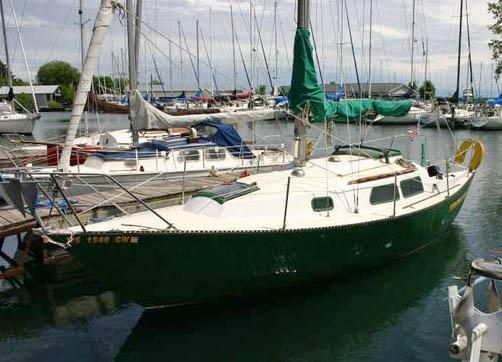 Production fiberglass boats have been around for nearly as long as the “baby-boomer” generation; yet, with few exceptions, most have not captured the same nostalgic interest of this generation as poodle skirts and 1957 Chevrolets. I mention this only because it’s important as it relates to the value of these older fiberglass boats, particularly those that were built to appeal to entry-level and budget-minded boaters.

The Newport 28 falls squarely into this aforementioned category which, by no means, suggests this is a boat to be avoided, only that buyers need to be cautious and smart about investment in improvements and upgrades.

The appearance of the Newport 28 is certainly a bit dated by today’s standard, but I think most would agree she remains a good looking boat nearly 35 years after her introduction in 1974. The pronounced sheer is a throwback to even earlier designs; although moderate overhang forward, short overhang aft, nearly vertical transom and raised trunk cabin are classic 1970s design features. Although built by Capital Yachts of Harbor City, CA, the original Newport 28 was designed by Cuthbertson and Cassian of Ontario, Canada. The similarities to C&C yachts of the same era are unmistakable.

In 1983, the Newport 28 II was introduced with a reconfigured and more modern keel and rudder arrangement. This updated version remained in production through 1987, and in all, nearly 1000 Newport 28s were built over the 14-year production run.

Like most production sailboats of the time, the Newport 28 is constructed with a solid fiberglass laminate hull and cored composite deck and cabin structures. Likewise, the quality of construction is typical of other price-oriented production builders. The deck and hull are joined on an inward flange with fasteners through a perforated aluminum toe rail, which is a more substantial method than much of the competition of the time; yet leaks at the connection have always been a common complaint.

With the introduction of the 28 II, Newport began using an innovative single piece fiberglass internal liner that was the foundation for everything from the V-berth to the attachment of bulkheads and even the motor mounts, much the same as most production boats are built today.

With only 28 feet of overall length to work with, a designer doesn’t have much opportunity to get creative with deck arrangements. That of the Newport 28 is pretty standard fare. A foredeck anchor locker provides adequate space for a suitably sized anchor and 150 feet or so of one-half inch rode. The trunk cabin is not excessively wide, which allows chain plates to be well inboard for good sheeting angles as well as convenient passage outboard of the rigging shrouds and inboard of life lines. The cockpit is large enough to permit a six-footer to stretch out for a snooze or accommodate four adults comfortably.

With the Newport 28, three basic interior arrangements were offered, which varied slightly depending on whether the galley was located aft to starboard, aft to port, or along the starboard hull side. The V-berth and port-side head forward remained pretty much unchanged over the years as did the port-side pull-out berth in the main saloon. The aft quarter berth arrangement depended on the location of the galley.

Headroom is more than six feet on centerline in the main saloon; storage is adequate, and sleeping accommodations are typical. Only the V-berth will actually accommodate two adults, and quarter berths are downright cramped for average-sized adults.

Prior to 1983, the Universal Atomic-4 gas engine was the standard auxiliary power; although many original owners opted for either Yanmar or Universal diesels. All were suitable auxiliaries, and parts and service are still available. On the early models, engine service was very difficult until a hatch was added in the cockpit deck. This improved access to the engine but created another concern. The small drains around the hatch must be kept clear and hatch seals kept in good condition to ensure the water-tightness of the cockpit.

The Newport 28 was marketed as a cruiser/racer and on the West Coast of the United States was once quite actively campaigned as both a one-design and under PHRF. The 28 II, with a more modern keel, draws nine inches more than her predecessor and under PHRF rates six seconds-a-mile faster. I believe I would be more than happy to sacrifice those six seconds for the advantages of deeper draft and more efficient keel and rudder shape. For comparison sake, under PHRF, the Newport 28 II rates about 20 seconds-a-mile faster than the Catalina 27 and about 60 seconds-a-mile slower than the Laser 28.

The Newport 28 is a boat built for those of us of modest means, and quite clearly, boats of this class do not stand up to neglect, extreme use, or abuse as well as their more expensive custom or limited-production counterparts. That said, they can be excellent values and provide years of enjoyment. However, keep in mind that regardless of your effort and money spent, they are likely to never be worth more than you pay for them. Look for a newer model, preferably with a dependable diesel engine that has been well cared for and won’t cost an arm and a leg to get out and enjoy sailing.

Reviewed in the August 2008 issue of SpinSheet by Jack Hornor