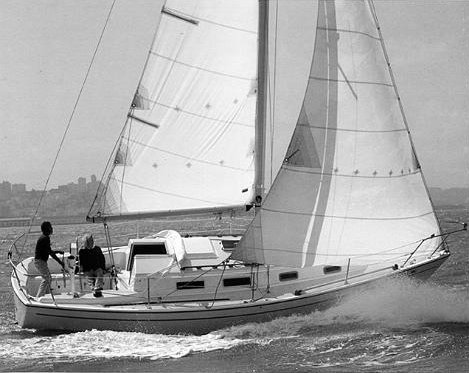 Following a design philosophy that dates back to the company’s founding in 1955, Pearson Yachts introduced the Pearson 303, in the 1983 model year as a no excuses, Plain Jane cruising boat. After almost 25 years, she remains just that.

The 303’s designer Bill Shaw was quoted, upon the introduction of the model, saying, “There are two main parameters guiding this design: First, we tried to make her the biggest 30-footer afloat, in terms of cruising accommodations and interior space. Second, we wanted to make a boat that could be handled by a couple or small family.” Certainly by 1983 standards, Shaw and Pearson succeeded on both counts. Even by today’s standards, the 303’s 25’ 5” waterline length and nearly 11’ beam provide interior and accommodations that rival even the newest 30-footers. She has a modest sail plan, moderately heavy displacement, conveniently located steering and sail handling gear, and still qualifies as easily handled by a couple or small family.

The hull of the Pearson 303 is constructed of solid fiberglass and resin, while the decks and cabin utilize a composite construction with balsa wood as a core. The keel is integral with the hull, and ballast is 3500 pounds of internal lead, so there is no concern for the condition of keel bolts or rusting of steel ballast. The internal structure is supported by a combination of fiberglass liners and plywood bulkheads. The rudder is mounted on a skeg, which is a bit less efficient than a balanced spate but is generally preferred by cruising sailors for its sturdier installation. The most common problems of aging Pearson 303 models are leaking deck fittings and toe rails that have caused deterioration of the balsa core decks. Almost all 303’s have some deterioration, although the extent and, therefore, the cost of repair, can vary substantially from model to model.

Although pretty much de rigueur on today’s 30-footers, the foredeck anchor locker of the Pearson 303 was a unique feature that eliminated the anchor and deck chocks that typically cluttered the small foredecks of the average 30-footer prior to 1983. Rigging shrouds are inboard to facilitate passage between the shrouds and life lines, as well as closer sheeting angles, and side decks are wide enough for easy passage from bow to the cockpit. Stainless steel bow and stern pulpits with single life lines were standard, although most opted for double life lines. On the negative side, an anemic little teak toe rail is so useless that it might as well not be present.

To maximize the interior volume, the cockpit is small and is interrupted by the mainsheet across the bridgedeck just aft of the companionway. Four adults can be seated comfortably, and there is a large port seat locker—something that I really miss on newer designs.

The 6’ 3” of headroom throughout the interior make the Pearson 303 a favorite among tall folks. The interior is arranged in a typical fashion with V-berth forward, followed by a starboard head and port hanging locker and bureau. The main saloon features port and starboard settees with a centerline drop-leaf table between them. Aft are an L-shaped galley to port and quarter berth to starboard. Accommodations and storage are quite adequate for a boat whose length is just over 30 feet. Two opening deck hatches and four opening ports provide good cabin ventilation.

This may have been Pearson’s first boat in this size range to abandon the Atomic-4 gasoline engine and opt for a diesel as the standard auxiliary. That said, the 15-hp Yanmar is insufficient in strong headwinds or foul currents for the 10,400-pound displacement of the Pearson 303, and access for service is not particularly good. At the risk of repeating myself, two-hp per 1000 pounds of displacement is a good general rule of thumb for evaluating auxiliary engine size.

The Pearson 303 is a single spreader masthead rig with the mast stepped over the keel and single upper and lower shrouds running to the same inboard chain plate. Keep in mind one of Shaw’s original design parameters—“the biggest 30-footer afloat.” To accomplish this required wide beam, generous freeboard, and full ends, which are not necessarily features that lead to fast, weatherly sailboats. Add to this a shoal draft, a modest Sail Area/Displacement ratio of 15.3, and a conservative Displacement/Length ratio of 284, and it should be no surprise the Pearson 303 is not noted for taking home the silver. What the heck—gentlemen (and ladies) don’t sail to weather. Crack off the wind a bit, and the performance of the Pearson 303 becomes quite acceptable in all but very light air. The wide beam makes the 303 stiff; she stands up to strong winds well, balances nicely with only a hint of weather helm when driven hard on the wind, and offers a dry, comfortable ride.

The Pearson 303 is today, as she was in 1983, an ideal boat for a couple or small family on a limited budget looking for a comfortable Bay or coastal cruiser.