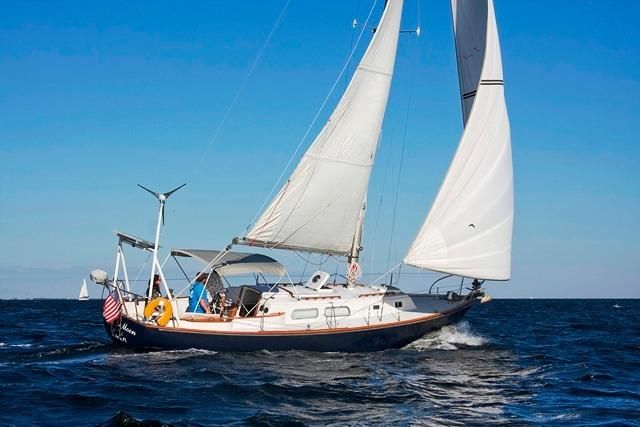 From time to time, a prospective client will ask me about my personal experience with a particular make or model of a boat they’re considering purchasing. In all honesty, I often have to admit to a pretty limited experience when the field gets narrowed to one model of one manufacturer’s line. Not so with the subject of this month’s review--the Pearson 35.

We go back a long way, nearly 25 years, in fact, to a time when I worked for one of Pearson’s dealers and my responsibilities included taking prospective customers for test sails. In 1979 I had an opportunity to sail a Pearson 35 from Hyannis, MA, to Norfolk, with a crew that consisted of the vessel’s new owner and his friend, neither of whom had ever sailed overnight before, let alone offshore. The first night we were hit by a storm and the wind blew 18 to 20 true for the next 36 hours. It was unsettling at first light to look behind and see 20-foot swells, but the crew and boat had come through the night in great shape. No one was sick and we just settled back and enjoyed the ride. Except for an occasional sea trial that was my last Pearson 35 sailing experience, but 20 years later the trip remains one of my more memorable sails.

The first Pearson 35 was built in 1968 and the model remained in production, nearly unchanged, until 1982. As a testament to its popularity, this 14-year production run was the longest of any Pearson model built, surpassing the venerable Pearson 30 by four years. In all, slightly more than 500 Pearson 35s were produced.

Pearson’s in-house designer Bill Shaw designed the P35 as a cruiser/racer to replace the company’s somewhat dated Alberg 35 model. When introduced in 1968, company literature promoted "a sleek keel/centerboard hull gives this new design excellent racing potential". By 1975, the tone had changed a bit and promotions praised "an alternative to the modern racing machine". It wasn’t that the boat had been unsuccessful on the racecourse, only that the CCA race rule had fallen out of favor to the emerging IOR rule that did not favor centerboard designs.

The P35’s hull is solidly constructed of fiberglass and plastic resins. The quality of construction falls in an area somewhere above the average production boat builder and below the high-end builder. The decks are built of a fiberglass composite with balsa wood core material. The deck and hull are joined on an inward flange with mechanical fasteners and sealant.

Generally speaking, P35s have held up well over the years, although many, if not most, are getting to the age where a fair amount of cosmetic attention may be necessary to restore a yacht-like appearance. Areas to look closely at are balsa-cored decks that have water saturation and deterioration. This can be a major problem and very costly to repair if the condition has been let go too far. Some osmotic blistering is common particularly on boats built from the mid-1970s to the end of production, although it is seldom severe enough to cause structural concerns. Older boats are likely to have leaks at fittings and the deck to hull joint that will need attention.

The original P35 was powered by a Universal Atomic gasoline engine, which remained the standard until 1978. Beginning in 1975 a variety of diesel engine options were offered including the 24-hp Farymann, the 25-hp Westerbeke and 30-hp Universal. In 1979, the Atomic 4 was dropped. All were suitable for the task of powering this 13,000-lb. boat, although original engines on boats over 20 years old are likely nearing the time for major overhaul or replacement. Access to the engine for service is difficult and locating the engine low in the bilges makes retrofitting other engines difficult.

The Pearson 35 has a livable, but, for my taste, less than ideal cabin arrangement. There is a comfortable V-berth cabin that’s not pushed so far forward that your feet tangle with your partner’s when you’re trying to get a good night’s sleep. There is an adequately sized head along the port side with hanging locker and storage opposite. Pre-1975 models had a combination dinette/double berth along the port side of the main saloon and a transom berth/pilot berth combination along the starboard side. In 1975, better sense prevailed and the arrangement was considerably improved by removing the dinette and replacing it with another transom berth. This opened up the layout and made two suitable sea berths available. The galley is aft with the sink and stove on the port side and the icebox on the starboard. My preference would be for a decent navigation station and a quarter berth in lieu of the port and starboard cockpit lockers.

The P35 was always available rigged as either a sloop or a yawl, although with the demise of the CCA rule, the yawl fell out of popularity. I think it’s safe to say that most P35s were rigged as sloops. I have been caught in some nasty conditions in this boat and have not found her to have any overwhelming bad habits. Her strongest point of sail, as would be expected, is reaching, although, if you don’t overpower with too much sail area, she will sail to weather quite respectably as well. The sail area to displacement ratio is 15.9, which is good enough for respectable light air performance providing the water remains fairly calm. When the water gets choppy, performance suffers as a result of a short 25’ long waterline and long overhangs fore and aft.

With more than 500 boats built, most of which were distributed in the Great Lakes and along the East Coast, there are usually a number of P35s to be found on the market at any given time. So, if the budget is still a little tight or you’re just looking for a good buy and are willing to put in some time and labor on an older boat, a Pearson 35 is certainly worth a serious look.

Reviewed in the April 1999 issue of SpinSheet by Jack Hornor