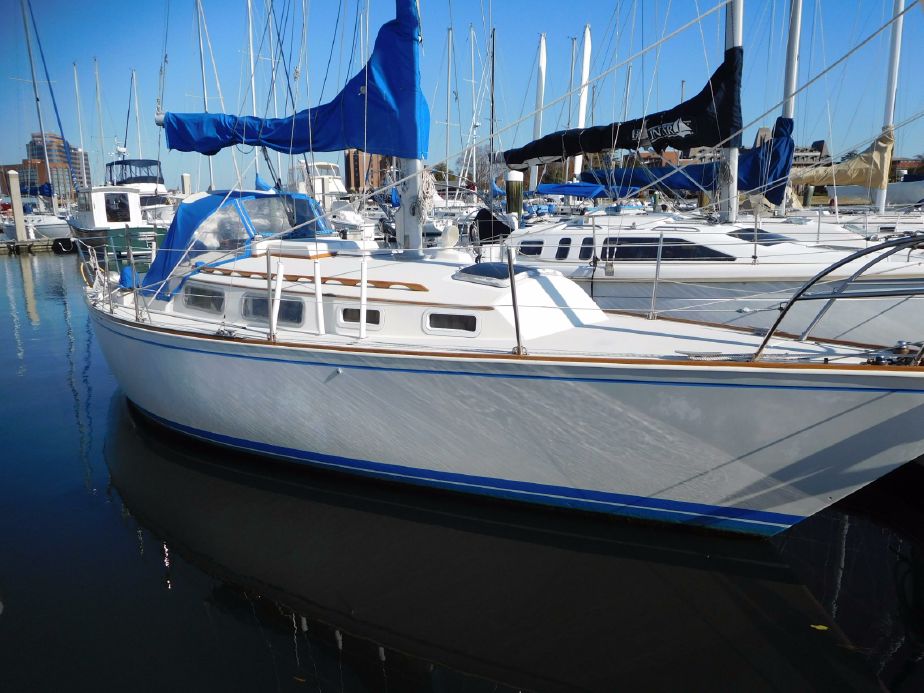 Sad to say, but they just don’t build them like this anymore. At least, production sailboat builders don’t build 30-footers like this anymore. It’s not that they aren’t capable or that talented craftsmen aren’t available; it’s simply a business decision. It costs only a small amount more to design, tool, and build a 36-footer than a 30-footer, yet the larger boat sells for significantly more and earns the builder better profits. At the risk of offending with an overused cliché—it’s a no-brainer.

The Sabre 30 was introduced in 1979 almost certainly to fill the market gap between the very successful 28-foot and 34-foot models. Design credit is given to the “Sabre Design Team”; although company founder Roger Hewson’s preference for conservative designs with moderate length-to-beam ratios, displacement, and draft seems to have clearly influenced this design. Promotional literature calls the Sabre 30 a “performance cruiser,” yet the overall length of 29 feet and 11 inches suggests some consideration given to competition, as the length was kept to the limit of the MORC rating rule. If you ever wonder why many 30-footers of the 1970s and 1980s were actually 29 feet and 11 inches, that’s the answer.

Identical in dimensions to the original Sabre 30, but with a slight increase in ballast weight, the Sabre 30 Mk II was introduced in 1983, and a retooled and slightly larger Mk III version was introduced in 1986. With the Mk III version, length increased to 30 feet and seven inches and beam increased from 10 feet to 10 feet and six inches, but there were few other substantive changes. Some references and literature show the Sabre 30 offered through the 1991 model year; though models newer than 1989 are rare, and I have not run across one.

Sabre 30 hulls are all hand-laminated, in the traditional method of quality fiberglass production, utilizing alternating layers of chopped strand mat and woven fiberglass cloth set in polyester resin. The deck and cabin structure use balsa wood core for stiffness and weight reduction. The two are joined on an inward hull flange with mechanical fasteners and sealant. Very little use was made of fiberglass liners for internal components resulting in quite good accessibility for inspection.

The quality of construction and attention to finish detail are well above those of typical production boats aimed at first-time boat buyers, but aging Sabre 30s are not without a few areas of concern. Osmotic blisters, sometimes quite severe, are fairly common on Mk I and Mk II; although the Mk III version utilized vinylester resin for exterior coats and is less susceptible to blistering. And, as detail-oriented as Sabre was with its construction methods, in some cases, deck hardware and cabin handrails were mounted through balsa-cored composites without adequately sealing the core. It is common to find deteriorated decks as a result.

The Sabre 30 features a six foot and nine-inch-long cockpit which comfortably accommodates three or four adults in a mushroom arrangement around a pedestal-mounted wheel. Side decks are wide enough to allow for easy passage from the foredeck to the cockpit, and rigging shrouds are inboard to allow the genoa to be sheeted inside the lifelines. There is a small locker on the foredeck for storage of ground tackle. Acceptable cabin ventilation is provided by two deck hatches, one forward and one aft of the deck-stepped mast, and four opening ports in the cabin sides.

Below, the Sabre 30’s accommodations follow the most basic arrangement plan. There is a V-berth forward followed by a port head and starboard hanging locker followed by the main saloon with opposing settees and a dining table, which drops down from the forward bulkhead. The galley is aft to starboard with a quarter berth and navigation station to starboard in Mk I and Mk II models. These positions are reversed on the Mk III version. Storage doesn’t get much better than this on a boat of this size, but differs among models due to a variety of potable water tank options offered. Capacities ranged between 22 and 70 gallons.

Mk I and early model Mk II versions were powered by 13-horsepower Volvo or Westerbeke engines, which are marginal for a boat that weighs nearly 9000 pounds. Later models were powered by 18-horsepower Westerbekes—a considerably better choice. Engine access is reasonably good, but engine compartment insulation is not. She tends to be rather noisy under power. Fuel capacity is 20 gallons, which is not great for serious cruisers, but adequate in most cases.

The Sabre 30 makes no pretense of being a race boat or even a racer/cruiser, yet I suspect most would find her performance quite acceptable as a cruiser and even club racer under the PHRF handicap system. The five-foot, two-inch draft version offers sufficiently improved windward performance over her shoal draft counterpart to justify the extra foot, and I would opt for it unless draft is critical for your area of use.

This was a popular model for Sabre for 10 years, and there are typically multiple offerings available at prices ranging from $20,000 to $60,000 depending on year and condition. Reported selling prices over the last six months have ranged from as low as $13,000 for a 1981 model reported to have some significant deck problems to $52,000 for a well-equipped 1987 Mk III version. For many used boat shoppers, there comes a time when, for about the same amount of money, they must decide between an older boat with some pedigree and prestige and a newer model of less noble heritage. I can make strong arguments either way, but for those who opt for pedigree, the Sabre 30 offers good value, style, and longevity.

Reviewed in the October 2009 issue of SpinSheet by Jack Hornor