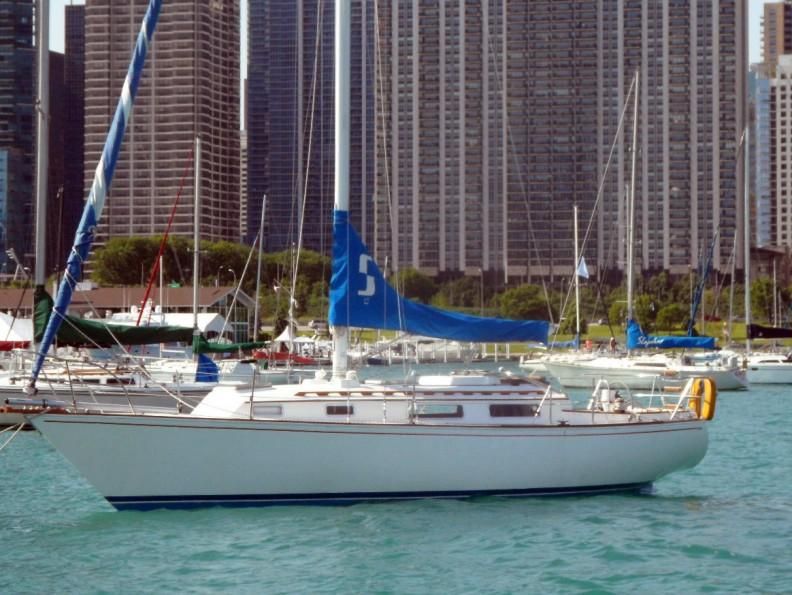 Can you remember when someone who was 35 years old was old? Or when the $18 per hour labor rate at the local boat yard seemed an outrageous sum? Well, if you can, I’d like to say you’re a lot older than I am, but the truth is I can remember all too well.

I was once again reminded of how our perceptions change with time when I was researching this month’s review and ran across a 1978 advertisement for the Sabre 34 that extolled her wide beam as one of the features setting her apart from her competition. By current standards, the 10’ 6" beam of the Sabre 34 would be considered moderate by most and narrow by some.

The Sabre design team, headed by the company’s founder Roger Hewson, was responsible for the Sabre 34. The model was introduced in 1977 at a time when it was common to blend in elements of IOR design though there was likely never any serious intention of creating a design that would seriously compete under the rule. The 34’s hull shape clearly suggests an IOR influence, however, without the extremes of the flat out racers of the day.

The original Sabre 34 measured 33’ 8" LOA, with a 10’ 6" beam, 5’ 6" draft and an approximate displacement of 11,300 pounds. A shoal draft centerboard version was also offered with a board up draft of 3’ 11". The design remained in production until 1984. In 1985, Sabre introduced a considerably modified 34. In fact, every principal dimension was changed as well as significant interior modifications, and it isn’t possible to compare post-1984 Sabre 34s to the earlier models.

From the first Sabre Yacht I ever saw in the early 1970s, I was impressed with the company’s quality of construction and attention to detail. The hull of the Sabre 34 is constructed of hand-laid fiberglass cloth and resin with substantial fiberglass encapsulated longitudinal and athwartship structural support. The deck and hull are through bolted on, and inward flange and structural knees and bulkheads are securely attached. Cabinet and joiner work is among the best to be found on any production built boat. Access for inspection is generally good through the boat, and it is rare to find any significant structural concerns, although moderate osmotic blistering is not uncommon below the waterline.

The decks and cabin house are a fiberglass composite with a balsa wood core. A number of fittings, including the handrails on each side, were bolted through the balsa core without properly sealing the core at the penetrations. This has led to serious delamination and deterioration on several models I have inspected. While it may not be a serious structural concern, the repair can easily cost $4,000 to $5,000 to retain the boat’s value.

The accommodations of the Sabre 34 are the epitome of the standard interior, one I have referred to in the past as right out of "Yacht Design-101" . The layout features a V-berth cabin forward followed by a port side head and starboard side lockers, port and starboard settees in the main saloon with a table that folds up against the forward bulkhead. Aft there is a U-shaped galley opposed by a navigation table and quarter berth. The navigation station and galley may be reversed depending on the year of production. This layout is traditional, utilizes available space well, is functional and is just plain tough to beat on a boat of this size.

The Sabre 34 performs well on all points of sail and under nearly all conditions. She has taken home her fair share of silver in club racing and is stout and comfortable enough to consider for offshore pasagemaking.

Two numbers that are commonly used to evaluate sailing performance are displacement to length ratio (D/L) and sail area to displacement ratio (SA/D). Again, by today’s standard, the Sabre 34’s numbers 279 and 16.1, respectively, are conservative. However, when compared against a relatively large sample of 50 boats between 33.5 and 34.5 feet LOA, these numbers are not far from the average, which, for my 50-boat sample, indicated a D/L of 257 and SA/D of 17.2.

Another performance number that’s interesting to consider for cruising boats is what its creator, Ted Brewer, has dubbed the comfort ratio. This number results from a formula that compares the length overall, length at the waterline, the beam and the displacement and is intended to represent a boat’s expected motion in a seaway. A larger number generally suggests a boat with a slower less violent motion and therefore more comfortable. The Sabre 34’s comfort ratio is 27. Comparing this to my 50-boat sample shows the Sabre to be slightly above the average of 25.4. This is not high enough to suggest sluggish performance. For comparison, the highest comfort ratio in my sample was the Hans Christian 34 with a ratio of 38 and the lowest was the J-105 with a ratio of 15.

Some early model 34s were powered by Universal Atomic 4 gasoline engines. After the first year of production only Volvo or Westerbeke diesel engines were standard equipment. All provide adequate power and reliability when properly maintained, although the two-cylinder Volvo engines are louder with more vibration than the Universal and Westerbeke models.

I have not been able to determine just how many pre-1985 Sabre 34 models were built, but this was a popular model and there are enough that there are usually several on the market at any given time.

The Sabre 34 is a traditionally styled, solidly constructed, good performing boat that, although a bit pricey for her age and size, should retain her value well when properly maintained.

Reviewed in the October 1999 issue of SpinSheet by Jack Hornor