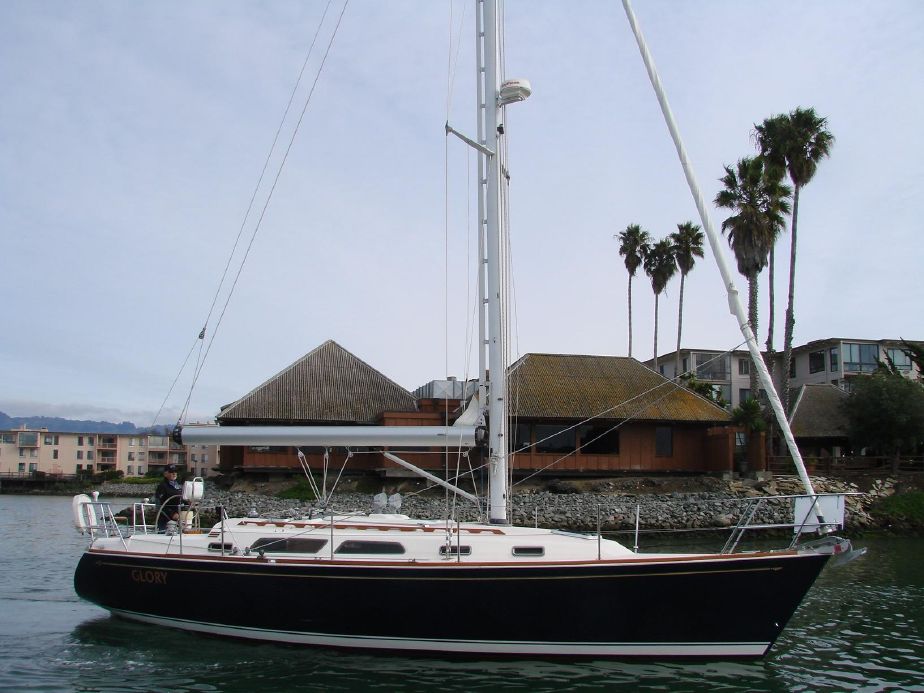 The Sabre 362 offers a good balance of sailing features and creature comforts that has resulted in an enduring appeal to a wide variety of sailors. It was introduced in late 1993 and should not be confused with the Sabre 36 (1984–91). The latter was designed by Sabre’s founder Roger Hewson while the former was designed by Marblehead, MA, designer Jim Taylor. At 36’ 2” length over all, the 362 is only two inches longer than her predecessor but her waterline length is more than a foot longer at 30’ 5” and her beam is nine inches wider at an even 12’. The hull shapes are quite different particularly below the waterline, and the newer Sabre 362 has considerably more interior volume. Three different keel configurations have been offered on the Sabre 362: a keel/centerboard which draws 4’ 2” with the board up, a wing keel which draws 4’ 8”, and a deep fin keel which draws 6’ 8”. Displacement is 13,800 pounds with fin keel, 14,060 pounds with wing keel, and 14,980 pounds with centerboard.

The hull numbers for the Sabre 362 start with number 107, a result of Sabre’s continuing the numbering from their earlier Sabre 36 rather than starting over when the 362 was introduced. This may cause a little confusion; although, for obvious reasons, it is not uncommon for boatbuilders to start their numbering sequence with a number other than one.

Construction of the 362’s hull is hand-laminated fiberglass with balsa wood coring. The decks, cockpit and cabin are hand laminated as a single unit with fiberglass, balsa, and marine grade plywood. The hull and deck are joined at an internal flange with adhesive sealants and bolts on six-inch centers.

The quality of Sabre’s construction is first rate throughout, but what appeals to me most is that Sabre remains one of the few production boatbuilders that minimizes its use of fiberglass liners and modules. Instead, bulkheads and joiner work are attached with fiberglass tabs directly to the hull; thus, becoming an integral part of the structure. When properly done, both methods of construction result in strong boats, but the less a builder relies on fiberglass liners and pans, the better the access for inspection, repairs, and service.

The many turns, curves, and recesses in the decks of the Sabre 362 can sometimes result in stress cracking of the gel coat surface finish. This is usually only a cosmetic concern. Many 362s were built with optional, dark colored hulls which look great but definitely require higher maintenance than plain white boats. Their reverse transoms typically start to fade within several seasons, and dark colored hulls are likely to need refinishing after 10 or so years in order to remain looking sharp.

The only known structural problem to have developed with the Sabre 362 involves the stainless steel rudderpost and support. The rudder has since been redesigned using carbon fiber rather than stainless steel, and Sabre has retrofitted all suspect rudders at no cost to the owners.

The 362’s decks are nicely laid out starting at the bow with a stemhead fitting with integral anchor roller and foredeck anchor locker. The side decks are wide and there are double lifelines and teak toe rails for security. There are two large opening deck hatches, and later models have two smaller hatches in the head and quarter berth cabin that improve ventilation. The mainsheet traveler is forward of the companionway to accommodate the mid-boom sheeting. This is a compromise location that puts the mainsheet out of reach of the helmsman and offers less control of the mainsail end-of-boom sheeting. But it has the advantage of not cluttering up the cockpit and allowing for easy installation of a cockpit dodger and awning. The cockpit is a comfortable seven and a half feet long with 40-inch Edison wheel easily reached while seated on either side. Although it is offered as an option, the swim step molded into the transom is a feature common to most models.

The interior arrangement provides comfortable accommodations for four adults and can sleep seven in a pinch. The V-berth cabin forward has lots of storage space, a hanging locker, and a seat and vanity with sink and mirror. In the main saloon there is an L-shaped dinette to starboard and settee to port. The navigation table is aft of the settee and the settee doubles as a navigator’s seat. Some will object to navigating while facing aft but this is an efficient use of space that most can quickly adjust to. There is a large head aft to port with separate shower stall. The starboard galley features a double stainless steel sink, LPG or CNG stove, and smallish icebox. There is a quarter berth cabin to starboard aft with a large double berth and hanging locker.

Auxiliary power is provided by a 32-hp Westerbeke diesel beneath the companionway steps. Access for service and maintenance is quite good after removing insulated panels.

If sailing performance is your number one priority, you will want to look for a deep draft fin keel model. The advantages of deep draft can’t be beat when going to weather, but if you’re like most gentlemen sailors and don’t spend that much time beating to weather, I doubt you will find fault with the sailing characteristics of either the wing keel or centerboard models. The Sabre 382 has a very nicely balanced hull with moderate beam and good all-round sailing performance, no matter what the keel configuration. The rudder is huge and provides excellent control and very quick response to the helm under power or sail.

In researching this article, I located six Sabre 362s offered for sale ranging from a 1994 model for $167,000 to a 2001 model for $234,900. These prices are certainly at the high end for production boats in this size range, but purchase price is only part of the cost of ownership equation. It’s worth noting that a 1993 Sabre 362, with an original base price of $138,200, recently sold for $132,000, and a 1999 model, with an original base price of $169,900, recently sold for $190,000. So, even though prices are well above many boats of comparable size and age, the Sabre 362 offers top resale value. In the long run, the cost of ownership of this handsome, high quality, performance cruiser may not be much more than owning a less expensive alternative.

Reviewed in the July 2003 issue of SpinSheet by Jack Hornor