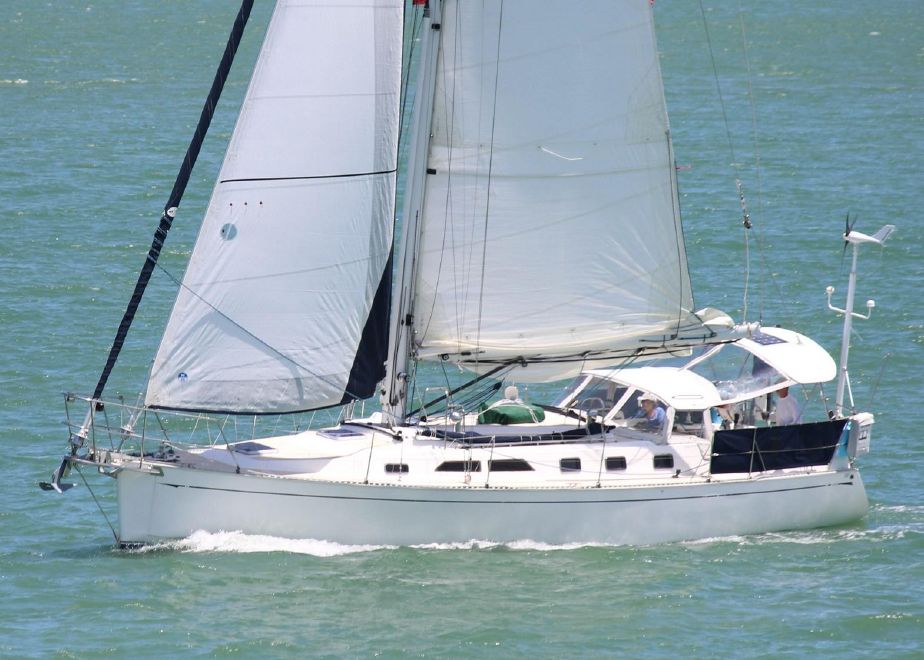 I’ve often said that people who design and build boats should be required to sail and maintain them for at least a year before they are allowed to sell them to the public. While I doubt this was the case with the Saga 43, this is most certainly a boat designed and built by people who sail and work on boats.

Designed by Seattle’s Bob Perry for Canadian boatbuilder Alan Poole, the Saga 43 was introduced in 1996, and more than 50 have been built to date. Although this cruising boat makes no claim to “cruiser/racer” status, the design is clearly optimized for speed. The sailing length is maximized with a nearly plumb bow and broad stern, and the beam is at least a foot narrower than the typical modern 43-foot cruising boat. The beam is further forward than is typical, which provides additional accommodations and helps to prevent weather helm as the boat heels.

To my eye, the Saga 43 is nice looking but falls a little short of being a truly handsome yacht. The foredeck is too short and the cabin trunk too long which detracts from a beautifully drawn sheer and otherwise well balanced design. Drawing beautiful boats would be a lot easier if we didn’t have to actually include room for people.

The quality of construction of the Saga 43 is first-rate, and all fiberglass fabrics are hand-laid for consistent quality. Both the hull and decks are cored with balsa wood although coring is eliminated in the areas of through-hull and deck fittings and at the attachment of the keel and structural grid that supports the rigging loads. Structural bulkheads are attached to both the hull and deck for a stronger overall structure. The deck and hull are joined on an inward hull flange with adhesive sealants and stainless steel bolts on four-inch centers.

The Saga 42 design and build team thought to include details overlooked by many production boat builders. The boat’s electrical wiring and plumbing is nicely executed with grommets fit for chafe protection where necessary. There are PVC conduits, with messenger lines, included for easy installation of aftermarket gear.

If your hobby is keeping up with your brightwork, the Saga 43 will disappoint you. The exterior is about as low maintenance as you can get without any exterior woodwork to maintain. The foredeck is small and not suited for sunbathers but provides enough space for handling ground tackle. The pulpit provides storage for two anchors. The trunk cabin features no fewer than four dorade vents, eight opening ports and seven deck hatches for exceptional ventilation in the cabin. The large cockpit offers comfortable seating and opens to a small swim step at the transom.

There have been three accommodation plans offered on the Saga 43, although the only variation among the three is forward of the mast. One layout features a large forward stateroom with a centerline berth and wash basin; a second has the same arrangement but adds a small port-side head; and the third has a large centerline head all the way forward followed by a Pullman-style berth to port. The Pullman layout offers a better sea berth but, in port, the outboard occupant must crawl over the inboard occupant to get out of bed. The forward head, while convenient in port, is next to worthless at sea and usually ends up being used for storage.

The main salon features port and starboard settees with a centerline drop-leaf table. The small navigation station faces aft and with the starboard settee doubles as a seat--a compromise that allows for a huge galley to starboard of the companionway. The master head and shower are to port. There is a quarter berth cabin to port with a large double berth. Opposite the quarter berth cabin is a huge storage locker accessed through the starboard cockpit seat.

Bob Perry launched the modern performance cruising movement in the early 1970s with his Valiant 40 design but, make no mistake about it, this in not your father’s Valiant 40. In moderate 15-knot breezes, the Saga 43 will do an honest 7.5 knots beating to weather with the full main and self-tacking jib. Crack off to a beam reach, furl up the jib, unfurl the genoa and you can expect to see speeds around 10 knots. The helm is light and well balanced.

The double headsail rig of the Saga 43 provides great versatility without the need to carry additional headsails. But unlike a cutter rig, the headsails are not flown at the same time. The self-tacking jib is intended for working to weather while the genoa is best for reaching and running. As a result, tacking to weather is nearly effortless but running downwind the genoa must be furled and then unfurled after gybing because the slot between the two headstays is too small for the sail to pass through.

Auxiliary power is provided by a 50-hp Yanmar diesel installed below the companionway steps. The engine is readily accessible through the starboard seat locker and below the quarter berth.

Reviewed in the May 2003 issue of SpinSheet by Jack Hornor