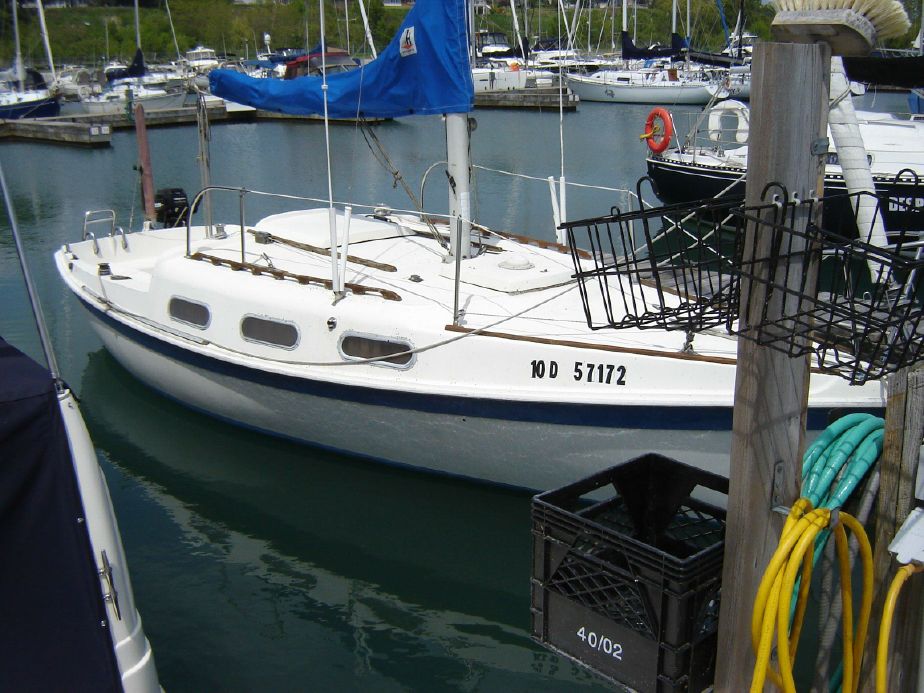 Several months ago a reader wrote to say he thought it would be helpful if I reviewed three to five boats that, in my opinion, would be good choices for people who are newcomers to sailing. This seemed like a reasonable request, but, after some thought, it became clear there are hundreds of excellent choices, ranging from dinghies to moderately sized cruising boats, which could serve a sailing novice well. I concluded that any attempt to narrow the selection to a few recommended boats would be short-sighted and unfair.

Regardless of size, I do believe there are a number of universal attributes that make a vessel a sound selection for a beginning sailor. Among them are responsive, although not overwhelming, performance, time proven design, and maintenance requirements that are not demanding. While it’s not alone, all things considered, the Tanzer 22 is on my short list of boats in the size, price, and age range for the beginning sailor.

Designed by Johann Tanzer with an emphasis on one-design racing, the Tanzer 22 was introduced in 1970. Boats were built in Canada and the United States by Tanzer Industries Ltd. of Dorion, Quebec, Canada, Tanzer Yachts Inc. of Edenton, NC, and Tanzer Yachts of Arlington, Washington.

A disadvantage of one-design sailboats is that the design must remain static in order to protect older boats. Modifications necessary to keep pace with changing preferences in style and innovations for improved performance are not possible. This drawback eventually caused the Tanzer 22 to fall out of favor with competitive one-design racers, and production ended in 1986, but not before more than 2,220 boats were built.

The Tanzer 22 measures 22’ 6" length overall with a beam of 7’ 10". Most were built with a swept back fin keel drawing 3’ 5", although a keel-centerboard version that drew 2’ with the board up and 4’ with the board down was an option. Because of the emphasis on performance, most boats were sold with the fin keel. Displacement is 2,900 lbs. for the full keel model and 3,100 lbs. for the centerboard model.

Construction of the Tanzer is better than average for this size of production fiberglass sailboat. The hull is hand-laid laminates of fiberglass and resin, and the decks utilize a core for stiffness and added strength. The deck and hull are joined on outward flanges with an adhesive bedding and, depending on the year and builder, either pop rivets or machine screws are used as fasteners on approximate 6" centers. The flange is covered with a vinyl molding to protect against damage resulting from minor docking incidents.

The interior consists of a molded fiberglass liner which incorporates the basic components of the layout such as berths, cabinets and cabin sole, and provides strength to the structure. The mast is a single spreader aluminum extrusion with single upper and lower shrouds, masthead forestay and backstay. The mast is stepped on the cabin top with a tabernacle base. The keel is cast iron.

There are only a few options available for design of an interior of a 22’ sailboat. I personally prefer to keep it simple with only a V-berth and double quarter berth arrangement. This seems to be the direction Johann Tanzer was going when he designed this boat, because I have an advertisement from a 1970 publication which shows a drawing of this arrangement. However, I have never seen this layout on a Tanzer 22, and I’m not certain any were ever built. Like the Catalina 22, Tanzer’s chief competition at the time, the cabin plan of the Tanzer 22 features a V-berth forward, small starboard side galley and quarter berth and port side dinette that converts to a "double" berth. While this arrangement looks good on paper, it doesn’t work well in practice. The dinette is too small for comfortable dining and, when converted, is an inadequate double berth. Headroom in the cabin area is limited to 4’ 6" although, on the plus side, the cabin house extends to the sheer which opens up the interior nicely.

The cockpit is quite large and seats four comfortably and six in a pinch. There is no bridgedeck between the cockpit and the cabin space which means that an unusual amount of water, such as might happen in a knockdown, would spill into the cabin space and flood the boat. For this reason the boat is recommended for use near shore and in protected waters only.

All Tanzer 22s are powered by outboard engines mounted on a transom bracket. A six horsepower motor will provide adequate power, although you may wish to go to a slightly larger engine in order to enjoy the convenience of electric start motors and an alternator for charging the ship’s battery.

Under sail, the Tanzer 22 is one of the better performing boats to be found in this size and age range. While she may not compete with the next generation dinghy types such as the J/22, she’ll go head to head with any boat of her size and era and hold her own with many boats of the same vintage two to four feet longer. There are no particular quirks to her handling.

If you think you may be interested in a Tanzer 22, an excellent opportunity is available for sailors in the Annapolis area. The Tanzer 22 has been the workhorse training vessel for the Chesapeake Sailing School for 18 years. The school maintains 10 Tanzer 22s for training and rental, just in case you might want to try before you buy.

Reviewed in the January 1999 issue of SpinSheet by Jack Hornor