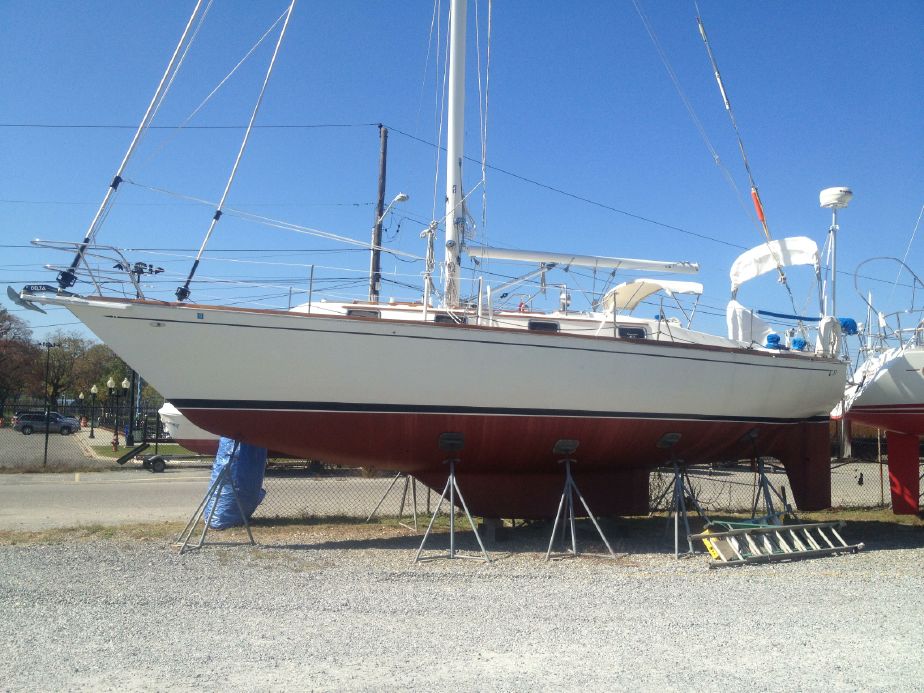 I once heard an expression that "a camel is a horse designed by committee." I recognize there are those who will argue the beauty and functional form of the camel. However, there is another case, evidenced by the collaborative efforts of designer Sparkman & Stevens and boat builder Tartan Marine, for a design "committee" approach that produced a thoroughbred, not a camel.

All the more remarkable is that the final design of any production boat is the result of many compromises. In meeting the needs of the designer, production, sales, marketing, and financial managers, the "compromises" resulted in one of today’s classic cruising yachts with the debut in 1976 of the Tartan 37. Between 1976 and 1988 more than 450 of these popular yachts were built.

This was not the first team effort of this designer and builder. Their history of successful projects dates back to 1961 with the Tartan 27. Undoubtedly, this long period of working together, as well as having a thorough understanding of one another’s goals, was a great asset when it came to working on the Tartan 37 project.

For 20 years now the Tartan 37 has maintained a reputation as a soundly constructed, nicely finished, well-mannered, and moderately priced yacht-- a reputation it deserves on each count.

Construction of the Tartan 37 utilizes balsa wood core material in both the hull and decks. This provides strength and rigidity and results in a relatively light but strong structure. Secondary bonding and filleting of structural members to the hull of the Tartan 37 is some of the best that will be found in any production built boat and it is rare to find any structural problems with these boats, even in those that are nearly 20 years old.

Tartan used a somewhat unconventional method of hull-to-deck attachment. An aluminum plate was fiberglassed under an inward hull flange at the shear. The deck is placed on top over sealant, and a teak toe rail added on top. Holes are drilled through this "sandwich," and the aluminum plate is tapped to accept fasteners. The toe rail and deck are then fastened to the flange with stainless steel machine screws on approximately 8" centers. I have always had some concerns that normal flexing of the boat would strip the threads on the aluminum plate and cause loss of strength at the hull-to-deck joint. I must admit though, I have not seen any significant signs of deck failure, and my concerns may prove unfounded.

On the interior, the joiner and finish work on this boat is first rate. However, I have heard an occasional remark about the dark interior teak woodwork and somber colored upholstery fabrics.

For performance, no one should expect a shoal draft centerboard design to perform at the level of a Grand Prix racer. The Tartan 37 is a cruising boat and generally, makes no pretense to be anything else. That’s not to say she has not won a race now and then. Steve Pettingill set a record in the Port Huron to Mackinac Island Single-handed Race in his Tartan 37, Ambergris, a fin-keel Tartan 37 which draws well over 6’. The majority of the 37s built were centerboard, shoal draft designs drawing just 4’-2" with the board up. This is nearly the perfect draft for a boat of this size intended for cruising the Chesapeake Bay and tributaries.

By any standard of performance comparisons for a boat of this class, the Tartan 37 is anything but disappointing. She is quite stable, with windward and downwind sailing performance that is certainly acceptable. When reaching, as would be predicted, this boat excels. Prices of used Tartan 37s put them in the moderate price range, but generally they are very good values. Quality construction, excellent reputation and loyal owners tend to maintain their value, and demand for well-maintained used boats is generally high. Will Rogers said he never met a man he didn’t like. Well, I’ve never met a Tartan 37 owner who didn’t love his boat. It’s a testimonial that’s hard to beat!

Reviewed in the May 1996 issue of SpinSheet by Jack Hornor