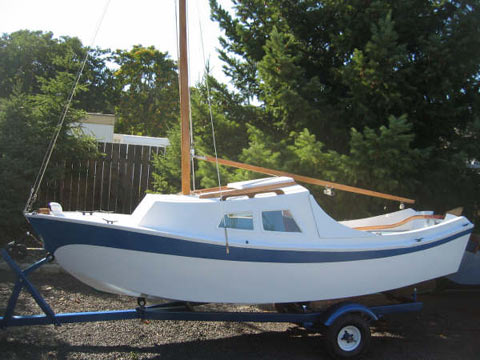 In his book First You Have to Row a Little Boat - Reflections on Life & Living, Richard Bode writes, "everything significant is small and slow." This philosophy may be contrary to some sailors’ beliefs, but for more than 42 years the West Wight Potter has been successfully marketed to sailors for whom size and speed doesn’t matter. In fact, owners of these mini-cruisers take such pride in their choice of small boats that they call themselves Potter Yachters.

The first West Wight Potter 14 was designed and built in 1960 by Stanley Smith of the Isle of Wight for a planned transatlantic crossing. Smith and his brother had previously made a crossing in a larger vessel and Stanley intended his design for a personal, single-handed attempt. As the story goes, on his first sea trial there was such demand for Smith’s new design that he gave up on his transatlantic plans and became a boat builder, eventually producing more than 150 copies of his little yacht. Smith did eventually sail one of his designs from the Isle of Wight to Sweden but he never did make his planned Atlantic crossing.
Smith’s West Wight Potters were built of plywood and, in 1966, Herb Stewart of Inglewood, CA bought one, used it to make molds for a fiberglass model, and began HMS Marine, Inc. to build and market the West Wight Potter in the United States. In 1976, HMS Marine, Inc. became International Marine and, according to their Web site www.westwightpotter.com, the company enjoyed its most productive year ever in 2000.

Over the years there have been several modifications of the deck and cabin configuration, but these have been subtle with the most noticeable being a change in the height of the cockpit combing in the early 1970s.
The cockpit of the West Wight Potter is more than five feet long, and it may be possible, as the manufacturer claims, to cram four people in the space, but its not very practical to expect to sail the boat with a crew of four. She accommodates two adults comfortably and perhaps a child in a pinch. The cabin top extends nearly to the hull sides, so access forward of the cockpit is over the cabin.

Typically there are no lifelines for safety, but most models do have handrails on the cabin top. As you would expect, the cabin accommodations of a boat this size are minimal. There is no galley but there are two 6’ 6" berths, and two adults can sleep in reasonable comfort. The cabin sole to deckhead height at the aft end of the cabin is less than four feet, and there is sitting headroom over the bunks. There is space to add a porta-potti but certainly no privacy for its use. There is reasonable storage space under berths. Many Potter Yachters have made the most of the accommodations available by adding canvas tents over the cockpit for extended cruising. In addition to Smith’s Isle of Wight-to-Sweden trip, other notable passages by Potter Yachters include a single-handed crossing from California to Hawaii and a navigation of the complete length of the Mississippi River.

Auxiliary power is not a standard feature, although a transom-mounted outboard motor bracket is an available option, and most Potters are powered by two-to four-horsepower outboard motors. Engines this size do not have alternators for charging a battery, and if you plan to do any nighttime boating, you’ll need navigation lights, a small 12v battery, and a small solar panel charger to keep the battery up. Larger outboard motors are impractical and add too much weight.

The sail plan of the original Potter 14 was a Gunter-style; however, by 1975, it had been modified to a Bermuda rig. The total sail area of both these plans was 72 square feet. By 1980, the mainsail roach had been increased, a full-length top batten added to the mainsail, and the jib size increased slightly for a new sail area of 87 square feet. The sail area-displacement ratios of the two models are 17.4 or 22.9 respectively. These numbers would suggest moderate to exhilarating performance if this were a normal cruising boat, but in a boat this size where the weight of crew and gear can nearly double the weight of the boat, the numbers don’t accurately reflect performance. Adding 400 pounds for a normal complement of crew and gear reduces the sail area-displacement ratios to 12 and 15.2 respectively and more accurately reflects performance. As the numbers suggest, better performance can be expected with the larger sail plan, particularly in light air. When conditions are right, the West Wight Potter will sail along quite comfortably at 4.5 to 5 knots and it is hard to find a drier ride on any boat in this size.

In all, more than 4,000 West Wight Potters have been built, but used offerings can be difficult to find. They remain popular and have a loyal following; boats are often sold by word-of-mouth before ever being advertised.

The West Wight Potter can be trailered behind even a small compact car. Launched and rigged in a half-hour, it can sail or motor into the most beautiful and remote gunkholes the Chesapeake Bay has to offer, it can sleep two adults in reasonable comfort, and it’s affordable. What’s not to like about this boat?

Reviewed in the August 2001 issue of SpinSheet by Jack Hornor