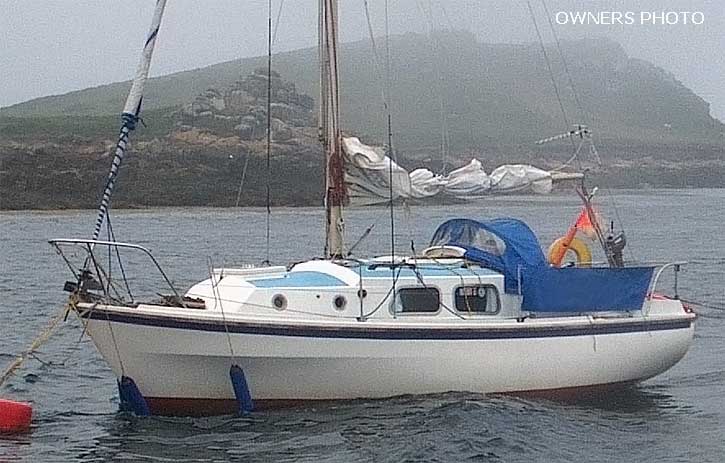 While preparing for this month’s review I recalled reading several months ago an editorial in a boating publication which laid much of the blame for the lack of growth in the sailing industry squarely on the shoulders of designers and builders for their lack of innovation and failure to keep up with the changing desires of the marketplace.

Well, Westerly Marine Construction of Hampshire, England, arguably Europe’s leading production builder of fiberglass composite boats from the mid 1960s through the 1970s, should never be accused of lacking a willingness to be innovative. The Centaur stands out as an example of the company’s innovative approach to the design of a 26’ family cruiser. At the time, many small cruising sailboats were simply scaled down versions of larger yachts. The result was similarly scaled accommodations. Westerly recognized a market for a small cruiser with accommodations that approached the comfort level of larger yachts. They commissioned the noted design firm of L. Giles & Partners to create the design. The Centaur was the result of this collaboration and was so successful that more than 2,500 hulls were produced between 1969 and 1980, many of which were imported into the United States.

The Centaur’s hull is a pretty straight forward fiberglass composite construction, but Westerly was one of the first builders to make extensive use of fiberglass liners for interior components that formed part of the structural integrity of the vessel. Unlike modern boat builders that use fiberglass liners, Westerly incorporated hatches that allow easy access for inspection and maintenance when needed. Perhaps the most unusual aspect of the Centaur, for the American sailor at least, is the use of fixed, cast iron bilge keels rather than the more traditional fin keel.

Although construction details changed over the years, for the most part older boats are sound and have held up well. Some areas to look closely at for signs of problems include the bilge keel attachments, the attachment of the forward bulkhead and the attachment of rigging shroud chain plates over cabin windows on older model boats. The principal dimensions of the Centaur are 26’ LOA, beam 8’5" and draft 3’. Although this design is over 30 years old, few, if any 26’ boats past or present, match the Centaur’s roominess. Three interior layouts were offered over the years; however, the most common provides a V-berth cabin forward followed by a head, the main saloon with convertible dinette on the port side and galley on the starboard followed by port and starboard quarter berths. There is minimum 6’ standing headroom throughout. Berths are all 6’ or better with enough shoulder room for the average sized adult. Storage space is excellent and there is a deep and comfortable cockpit.

As the saying goes, "there’s no such thing as a free lunch," and there is no way to fit this much in a 26’ boat without tradeoffs somewhere. The long, high, wide cabin trunk leaves little foredeck and side deck space and results in a somewhat chunky looking design. In addition, bilges are practically nonexistent and small persons will have difficulty seeing over the cabin top from a normally seated position in the cockpit. These seem to be a small price to pay for the accommodations offered in this design.

Although a few Centaurs were powered by outboard motor, most were fitted with various models of Volvo Marine inboard diesel engines ranging from 7 to 25 horsepower. The MD2B was a popular selection on later model boats, and while 25 horsepower may seem to be a bit of overkill for a 6,000 lb. boat, keep in mind this design was intended for the UK market where strong tidal currents are a fact of life, and too much power is far better than too little.

As noted earlier, the Centaur is twin bilge keel design and, while there are any number of practical reasons for considering this arrangement in some areas of the world, in my opinion, the negatives clearly outweigh the positives for the average Chesapeake Bay cruiser. Perhaps most importantly the increased wetted surface and the separate hydrodynamic characteristics of each keel as the vessel heels detract considerably from speed and pointing ability in an area where light winds are common.

The Centaur was primarily built as a sloop rig with a displacement length ratio of 253 and a modest sail area displacement ratio of 15.1. According to literature I have read, the Centaur was also offered as a ketch rig but I have yet to see one in this country. Sailing performance measured against a racer/cruiser design of about the same vintage such as a Pearson 26, would be less than stellar but this is likely an unfair comparison. When compared to a pure cruising design such as an H-26, the differences in performance would be much less dramatic, and the accommodations of the Centaur are better than either.

After all is said and done, it is hard to find serious fault with a boat that thousands of sailors have found suited to their needs and has stood up well to the rigors of the marine environment, in some cases, for over 30 years.

Reviewed in the February 1998 issue of SpinSheet by Jack Hornor