Maximize Your Chance of Reeling in Fresh Fish

As cruisers, we know a few universal truths. Everything tastes better when eaten on a boat; very little is more rewarding than eating something you’ve caught or grown yourself; and it’s hard to beat a piece of fresh fish. So let’s take a look at how we can maximize our chances at catching a delicious meal while we travel between destinations. 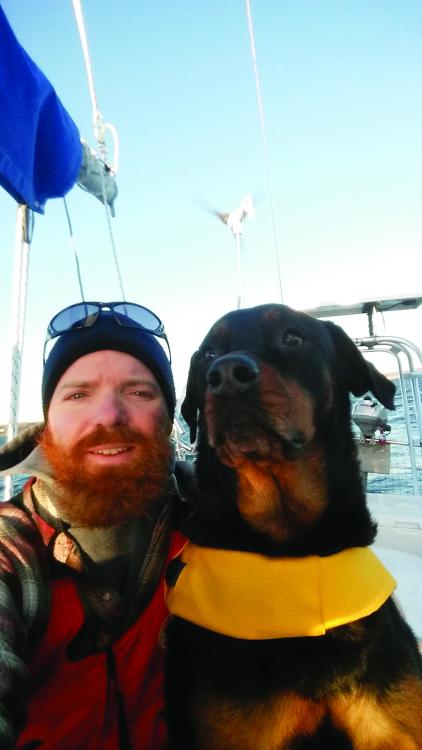 There are some basic rules that apply to all anglers. The first is that you need to find fish before you can catch them. After you’ve found fish, you need to convince them that whatever you have on your hook is something they really should have in their bellies. Finally, after you’ve enticed them onto your hook, you need to get them into the boat.

The need to locate fish seems elementary, but it is often the most challenging step, so we need to use all of the clues we can to find areas that hold concentrations of fish. The intricacies will be different based on location and intended quarry; however, there is one concept that is the gold standard for locating fish. The fish we are trying to catch spend the vast majority of their lives either in the vicinity of what they eat or looking for it. The real trick then, is not finding the fish, but finding their food, which we commonly call “bait.” 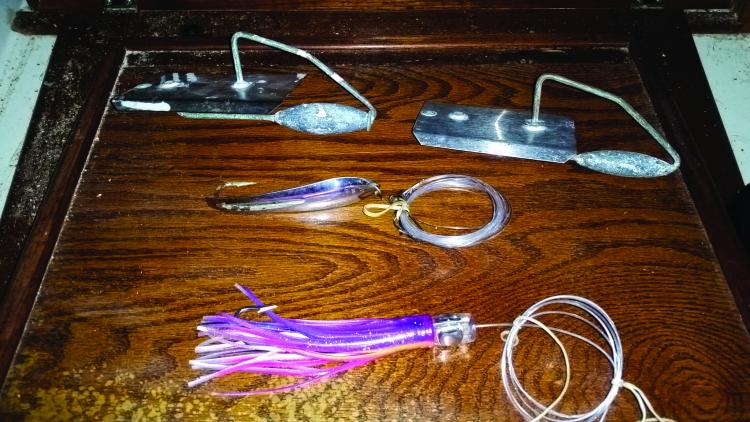 We can do this by looking for visual signs, by using our fish-finding electronics, or by spending years gaining the knowledge through experience and study of the habits of bait. Let’s focus on the visual indicators. One of the most reliable is sea birds. Gulls, terns, gannets, pelicans, or frigates all eat the same bait the fish we’re seeking to eat. A flock of birds sitting on the water warrants a closer inspection. They have often found bait holding in deeper depths and are simply waiting for it to move into striking range. Spend time near them; if predators aren’t in the vicinity, they will be soon. 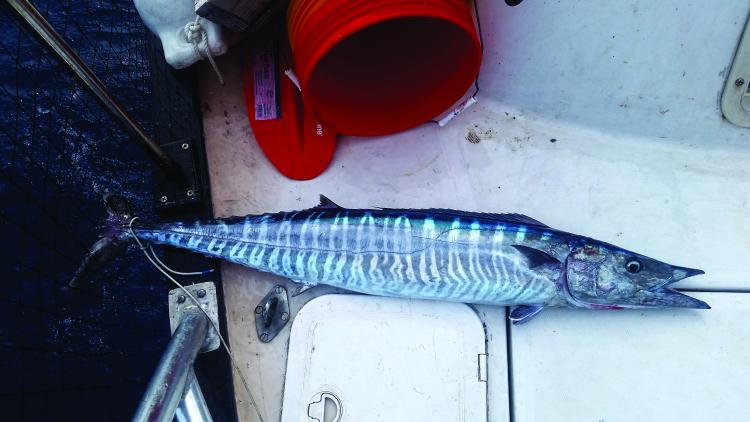 Birds actively swooping, diving, and squawking are feeding and always worthy of investigation. Troll around the perimeter of the area of concentration, rather than right through it, to avoid spooking the fishing and angering your fellow anglers. Birds flying aimlessly are either searching or otherwise occupied with bird stuff and shouldn’t draw more than our appreciative observation. However, if you spot multiple birds flying with purpose in the same direction, you might want to have a look at where they are headed. Now that we’ve found fish, we need to hook them. For this, we’ll need a rod and reel, some line, a lure, and possibly a device to hold the lure below the surface. Rods and reels can be obtained (along with local knowledge) at area tackle shops, online, or on the used market. There are countless options, but for trolling, a heavy conventional reel (as opposed to spinning) is the way to go. Err on the side of heavier duty rather than lighter, since stopping the boat to reel in a fish is not as practical under sail as it is on a sportfishing boat.

For simplicity’s sake and due to the premium placed on refrigerated space often precluding the use of fresh bait, we’ll mostly be using artificial lures. Focus on simple, durable lures that perform their best at the four to six knots we usually find ourselves traveling. In broad terms, there are two types of lures: those designed to be fished on the surface of the water and those designed to be fished below it.

The simplest, most durable, and probably oldest of all lures is the spoon. What was once originally made by affixing a hook to a kitchen spoon has become more refined, but is still nothing more than a piece of formed metal with a hook and sometimes a little garnish thrown in for good measure. They are designed to spin and flutter when trolled, imitating an injured baitfish. A spoon will catch every species of fish we are seeking. 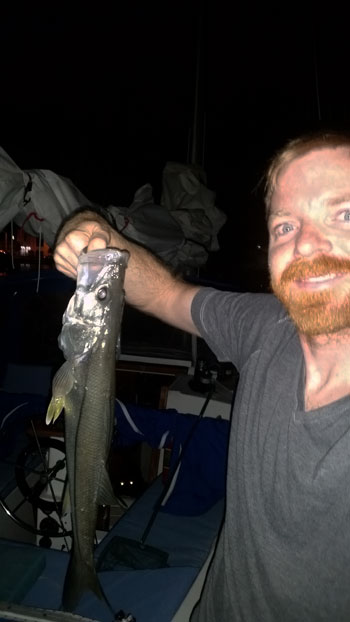 There are many brands of spoons, and most anglers have their favorites. My personal favorite is a Drone, followed by a Tony Acetta. They are available in a multitude of sizes and colors. Silver is the original color, and my go-to choice, but others have their place. Sizes vary from under an inch long to over a foot. The most effective size will depend on the size of the bait that fish are actively eating, but I most often find myself trolling spoons somewhere between two and six inches. Spoons are a subsurface lure; they must be trolled underwater to have the proper action. For our purposes, there are two tools for holding them underwater: a sinker and a planer. Each has its pros and cons, and I always have each on my boat. A trolling or inline sinker is a football-shaped hunk of lead with an eyelet at either end. The line from the rod connects to one end of the sinker, then a leader (a short length of line, usually 10-20 feet) goes between the other eyelet and the lure. It’s dirt-simple and close to foolproof, with only two real drawbacks: The first is that a heavy hunk of lead decreases the enjoyment of fighting a fish; the second is that, as boat speed increases, the effectiveness of the sinker decreases, meaning a heavier sinker is required to achieve the same results.

A planer, on the other hand, is slightly less foolproof and simple, but it does mitigate the two drawbacks of a sinker. A planer is rigged the same as a sinker. It has two positions, set and tripped. When the planer is set, it sits at an angle to the line and the direction of travel of the boat that makes it dive beneath the surface. Unlike a sinker, a planer dives deeper as boat speed increases. When a fish strikes the lure, it pulls the planer into the tripped position, drastically reducing the drag and angling the planer and fish toward the surface. This reduces the sinker’s drawback of having a heavy weight between the rod and the fish, but it doesn’t eliminate it. Thus far, most of this discussion is applicable to trolling in both the Bay and offshore. While there are many similarities, a few tweaks to our tactics will improve catches in the bluewater. The biggest difference is in the use of surface vs. subsurface lures. In the Bay, I so rarely troll a surface lure that you might as well call it a rule. Offshore fishermen, for the most part, follow the opposite rule; the majority troll strictly surface lures. A few will troll a lure deeper in the water column. I do, and I’ll advise you to do the same. Again, “matching the hatch,” as trout fishermen say, is the name of the game. I can’t think of a predatory fish in the sea that will pass up a meal of squid. (Can ya’ blame them?) Fishermen know this, and that fact is evidenced by the array of lures intended to imitate squid. These lures are designed to skip along the surface, briefly diving below it, before returning to it. The result is a lure that resembles a fleeing squid, splashing and leaving a bubble-trail as its wake. 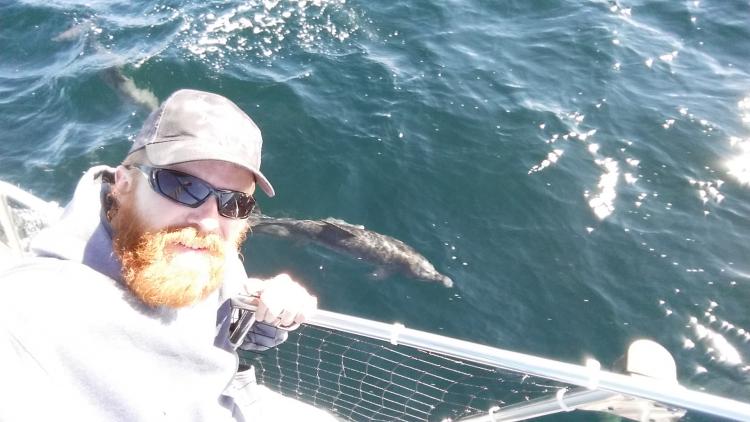 While the visual clues that help us find fish in the Bay work in the ocean, there is one thing that all savvy offshore anglers seek that is of little significance to those in the Bay, and that is floating debris. Everything that floats on the surface long enough will eventually attract its own ecosystem, from the tiniest of shrimp and crabs to the largest of pelagic predators. Anything, and I mean anything that you spot on the surface: a cardboard box, a bucket, a clump of seaweed, a float for a lobster trap, or a branch is worth trolling by. While the most common species found beneath floating structure is the mahi-mahi, lucky anglers will also find wahoo, tuna, and billfish. 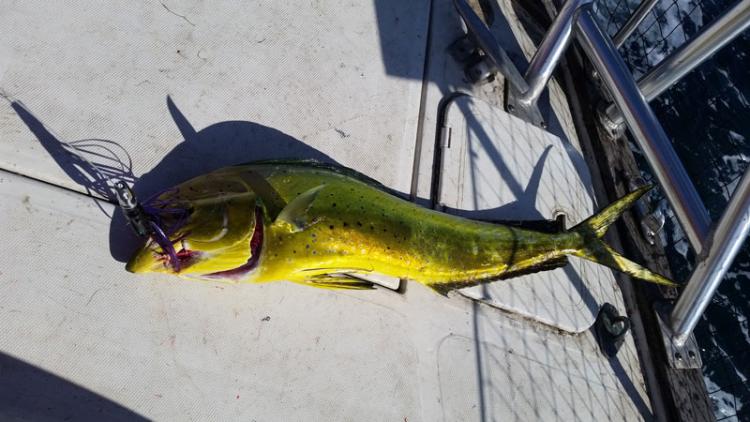 If I had to choose one species for offshore cruisers to target, it would be the mahi. They are beautiful, aggressive, fast-growing fish that are often found in a size easily manageable for sailing anglers in nearly all waters warm and blue, the world over. Plus, they are easily converted into fish tacos. And let’s be real; who among us doesn’t love a good fish taco? So keep your eyes peeled for floating debris. Fishing can be as simple or as complicated as you want it to be. If I had to choose a two rod trolling spread for summertime Bay cruisers, each rod would have a planer and a spoon. Vary sizes of each and the colors of the spoons as you so choose. For offshore trollers, one rod would have a planer and spoon combination and one would have a surface squid-type lure.

Go have some delicious adventures. by Sean McCarthy