I am new to the SpinSheet Century Club but have read about it for years. In previous years I knew it was out of reach for me. As we approached 2019, I could see from our ambitious plans, this might be the year I could make it happen. 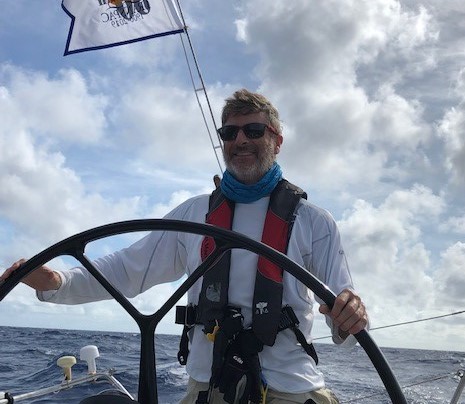 The year looked to get off to a good start with a family vacation in Key West at one our favorite places, Harborside Marina, which has boat houses for rent as rooms. We had a few windy nights in the room which rocked enough to get you a little off balance in the middle of the night when moving about in the dark.

We sailed in the Abacos in March with longtime sailing friends and a couple of friends who had never chartered before. When in St Pete for the NOOD Regatta in February, I met Brian Malone with North Sails. Brian was raised in Hopetown. He suggested we stop in and see his dad, Vernon, who ran the grocery and bakery there. The bakery visit was a highlight of the trip.

I have since checked with Brian who said his dad and family were okay after Dorian but that Hopetown is devastated. Based on what we saw in the Abacos, the people there will rebuild in time. Our friends who were new to chartering are still saying thanks that we all got to see the Abacos before Dorian.

I sailed in the Transpacific Yacht Race in July and met my wife in Honolulu to celebrate our 40th anniversary a little early. Every minute of the race and meeting her at the finish were definite highlights. While racing in Transpac we had gusts to over 30 knots with the chute up and under control in the pitch dark with total focus on keeping the boat on her feet.

When I first learned that we would be steering one hour of our three hour watch, I thought , “why so short?” After a few nights steering in challenging conditions, an hour was about right. We saw dolphins , seals, and some juvenile albatrosses determined to land on our masthead threatening to take out our instruments during our crossing.

This much time on the water has improved my perspective. Particularly the Transpac made me aware of how much we are just not really in control of. Plan, have a backup for the plan, be flexible about the plan.

I highly recommend taking a season and shooting for the Centurion mark. It was a realistic goal for me this year since so many events lined up in favor. In any other year it would have been a lot harder but no one said it better than Mark Twain, “Twenty years from now you will be more disappointed by the things you didn’t do than by the ones you did.” So, throw off the bowlines. Sail away from the safe harbor. Catch the Trade Winds in your sails. Explore. Dream. Discover.

SCROLL DOWN ON THIS PAGE FOR MORE SPINSHEET CENTURY CLUB STORIES.