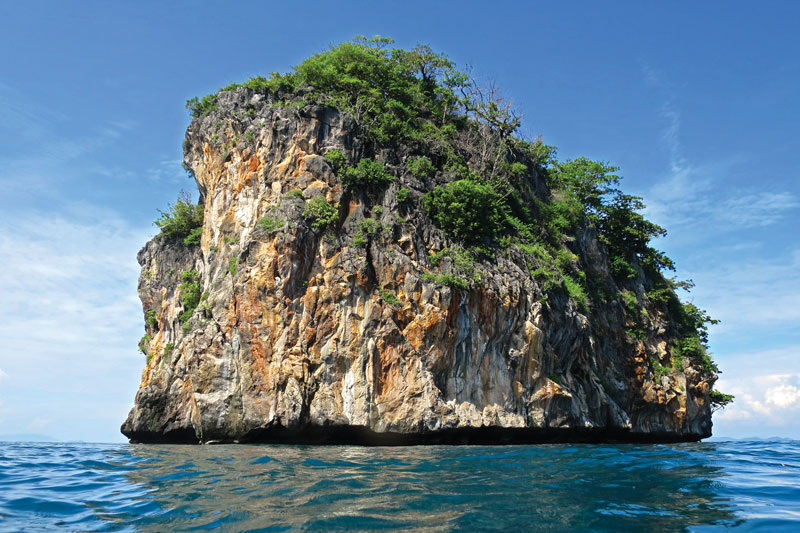 Phang Nga Bay is a 154-square-mile body of water lying between two of Thailand’s most popular tourist destinations: Phuket and Krabi. The bay’s 42 islands are home to majestic limestone pinnacles, hidden lagoons, and miles and miles of pristine beach and jungle.

On a recent trip there, through Sunsail from the base in Ao Po Grand Marina, my photographer and I chartered a brand new Robertson and Caine 404 with air conditioning, four cabins, electric winches, and generator. It was fantastic.

Phang Nga Bay is especially famous for the iconic and unique towering limestone islands that have been featured in popular films, such as “James Bond, The Man with the Golden Gun,” Leonardo DiCaprio’s “The Beach,” and “The Hangover, Part II.” Among the interesting features of this bay are its “hongs.” Hongs start out as sea caves whose roofs have collapsed due to years of erosion, opening them up to the sky and creating hidden lagoons. Often the only way to access these hongs is through a remaining section of the cave that tunnels to the outside of the island.

Our first day out, we headed for Koh Phanak and neighboring Koh Hong (Koh = island in Thai), only a few hours sail north from the base.

As we entered the sea cave leading into the island, it became pitch dark; all we could hear was the splashing of water and the screeching of bats. The roof was so low that at times we had to lie flat on the kayak to pass through. Soon, we began to see a glow of light, and green and blue started reflecting off of the dark water. As we entered the inner sanctum of the hong, we were in a magical, protected lagoon surrounded by massive limestone walls laden with lush tropical vegetation. 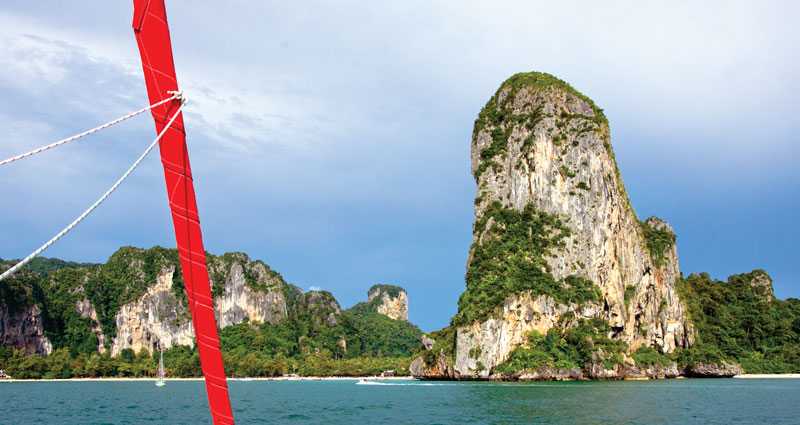 As the tides in Phang Nga Bay can change as much as 10 feet, some of these access caves can be either underwater or dry, depending on the time of day, making them inaccessible.

The second hong on the north side of Koh Phanak can only be reached via a footpath through a stalagmite- and stalactite-filled cave. The tunnel is about 300 feet long, so a flashlight is essential. At the end of the cave, we were looking down from a cliff at the hong.

A little north of Koh Phanak is Koh Tapu (a.k.a “James Bond Island”). It got its name from the Bond movie “The Man with the Golden Gun,” which was filmed here. The main feature of the island is a 210-foot-high limestone pinnacle.

This is a super popular tourist spot; therefore, it’s essential to get here very early. If not, plan to be cheek-to-jowl with daytrippers. Koh Yan (just to the west of Koh Tapu) is another island with a beautiful pinnacle that was not featured in a movie, and as such, is much less crowded.

Ao Tha Len, on the eastern side of the bay has a very nice mangrove to explore, which gave us a break from hongs and beaches and also from the crowds, as it is far less frequented than some of the other parts of the Bay. Our kayak route took us through towering limestone canyon walls and thick mangrove forests that are home to marauding monkeys and insanely large lizards.

For a bit of a spring-break, full-moon party scene, we stopped for a night at Koh Phi Phi Don. This island is best known for being the launching spot for Koh Phi Phi Le, where they filmed the movie “The Beach” with Leonardo DiCaprio. As such, the place has developed into a kind of mega party zone. 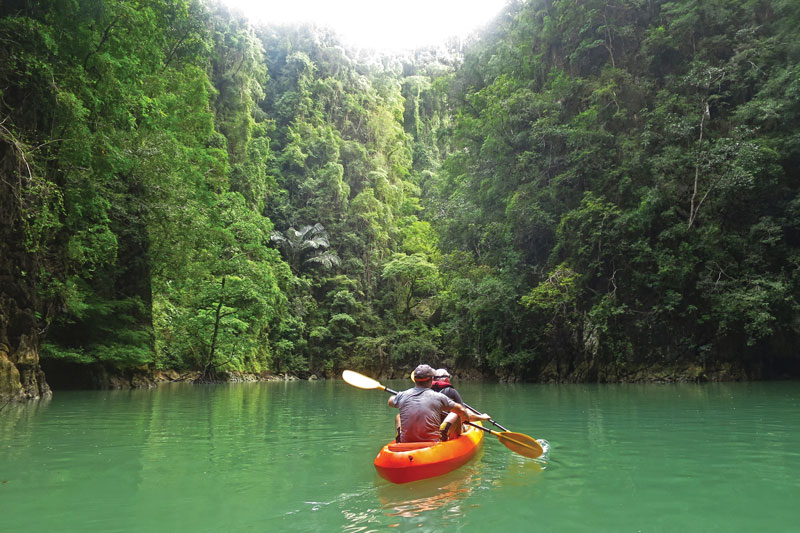 Koh Phi Phi Don has a lot of dive operators, and we did a couple of great dives with an operation called Sea Bees. As one of the oldest and best dive companies in Phuket, Sea Bees has dive centers all over the region. We liked them so much that after our sail we joined them for a liveaboard trip to the Similan Islands off the western shore of Phuket, which was legendary and highly recommended if you like to dive.

One of the islands along the eastern shore of the bay that we especially enjoyed was Koh Muk. On the eastern (less popular) side of the island, there’s a wonderfully mellow spot called Charlie Beach. Two resorts call it home, but it was essentially empty. There’s an awesome little Thai restaurant on a cliff at the edge of the beach called Koh Yao Restaurant where we had one of our most memorable Thai meals while enjoying some ice-cold bottles of Singha beer.

As we got farther south, Phang Nga starts to join the Andaman Sea. The water gets clearer and deeper. The geology also changes from limestone to granite and quartz.

Our last destination, Koh Racha Yai, was the iconic crystal-blue-water, white-sand-beach paradise. There were some quaint, inexpensive bungalows  and a medium-sized hotel. The main beach gets a little busy in the mid day with tour boats that come in from the mainland; however, in the morning and afternoon, you can have it mostly to yourself, and the snorkeling is very good with incredible visibility.

If you are looking for change it up from that standard Caribbean or Mediterranean cruise and step a little outside of your “zone,” I recommend Phang Nga Bay. Just be ready for a little adventure.