Changing the landscape of coastal development

Exploring a rolling conservation easement makes sense when you consider that coastal properties are prime real estate. People love being on the water, after all, and harbors are often the economic hub of a city. Sea level rise, however, is changing the landscape of coastal development. Questions loom about how to handle homes, businesses, and entire cities that are at risk of flooding, and there rarely seems to be an answer that makes everyone happy. 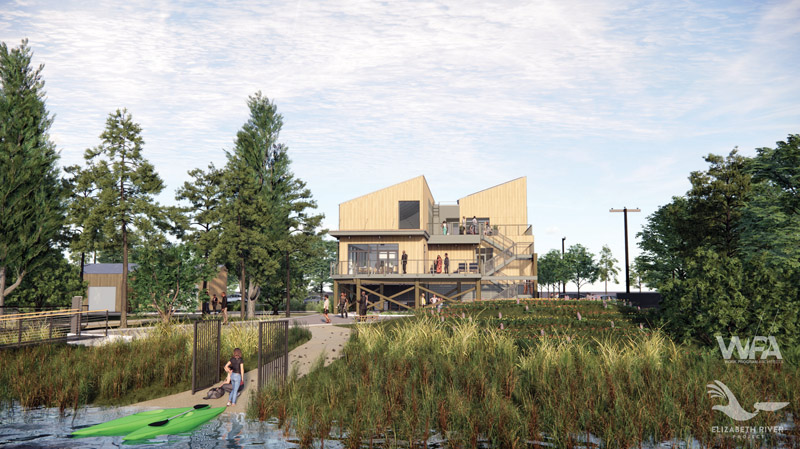 Should we prohibit development on floodplains to avoid the expense of repair and recovery in the future, or should we invest in shoreline protection? Should we buy out current owners of at-risk properties before they become a liability, or entrust the market to handle the problem for us? These questions don’t have simple answers, but there is one potential solution being explored in Norfolk, VA: rolling conservation easements.

A traditional conservation easement is a voluntary legal agreement between a landowner and an enforcing body, such as a government agency, that permanently limits future development of the land to achieve agreed-upon conservation goals, regardless of changes in ownership or other circumstances. A rolling conservation easement takes into account the effect that sea level rise will have on coastal properties, allowing the easement to move with the shifting coastline.

Rolling easements are not new. In Texas, the Open Beaches Act uses a rolling easement to ensure that public beach access moves with the shoreline, as opposed to allowing beaches to become privatized as they migrate upland onto private properties. However, even though the concept of a rolling easement was coined in the 1990s and a handful of states have adopted them for various uses, no private entity had ever utilized one—until now.

The Elizabeth River Project (ERP), a nonprofit organization based in Norfolk that is working to restore the Elizabeth River, is the first private entity to employ a rolling conservation easement in their upcoming Ryan Resilience Lab, set to open in 2023. The lab, deliberately built on a floodplain adjacent to the river, will be the organization’s new multi-million-dollar headquarters. It will feature a living shoreline, solar power, a green roof, a learning park, and a floating entry pavilion that can serve as a refuge for the community during extreme flooding.

When I spoke with Marjorie Mayfield Jackson, ERP’s executive director, she explained that they strive “to demonstrate how to live, work, and play in the urban floodplain in ways that protect the river and the people as sea levels rise.” Regarding the rolling conservation easement, Jackson explained that it “formalizes our intent to give the site back to the river when it is no longer practical to stay there because of sea level rise.”

Regardless of what the future holds, “it’s always protected as a conservation site, not to be developed as something else, and there’s a legal commitment that recognizes that one day, decades from now, it will be more appropriate to leave the site and let the wetlands fully take over.”

The easement, which will be enforced by the Living River Trust, prohibits ERP or future owners of the property from hardening the shoreline (e.g., installing bulkheads or riprap), and requires the building to be demolished and the land surrendered once a certain threshold of sea level rise has occurred. This arrangement allows the economic benefits of coastal development to be reaped while there is still time, while also ensuring that the land will be returned to the ecosystem in prime condition when the clock runs out.

For some, the idea of deliberately surrendering prime coastal real estate to rising waters may seem like an admission of defeat. Casey Shaw, ERP’s director of marketing and communications, explains, “In this area, and in so many areas that are faced with sea level rise right now, ‘retreat’ is almost a dirty word… But this is a planned retreat, so you see it on the horizon. You know that it’s coming, and you can make calculated plans for it. It isn’t something that’s impending doom.”

Jackson elaborated, “I think as a society we would rather just stick our heads in the sand and say, ‘Oh well, maybe the scientists are all wrong,’ and a lot of people have been doing that with climate change in general… But this is not a head in the sand, and it’s not a ‘well let’s hold on and see.’ It’s an empowered response.”

Assuming that a sudden reversal in climate change trends isn’t on the horizon, solutions such as managed retreat and rolling easements may help us swallow a difficult pill a little bit easier and save us the trouble of disaster recovery, expensive buyouts, and environmental remediation in the future.

There are still wrinkles to iron out in this system. Jackson explained that one of the more difficult aspects has been deciding exactly what the trigger is that determines when the site ought to be abandoned: “At what point do you say, ‘Now,’ when you’re trying to look so far in the future?”

Despite the challenges, however, Jackson and ERP hope to set an example for the rest of Norfolk and coastal cities around the world. “We’re a small nonprofit with big dreams and big ideas,” she concluded. Perhaps innovation such as this will help encourage other homeowners, businesses, and governments to explore how they can become more resilient in the face of climate change, too.

To learn more about the Elizabeth River Project or to become a member, check out elizabethriver.org.