To Everything There is a Season: The Gucci Boat

When Gene Miller and I rode home from Remington, VA, 10 years ago, towing behind us the ageless beauty we’d purchased, we knew it was the handsomest vessel either of us had ever owned or ever would, but we didn’t know what to call her. Very quickly, she named herself. 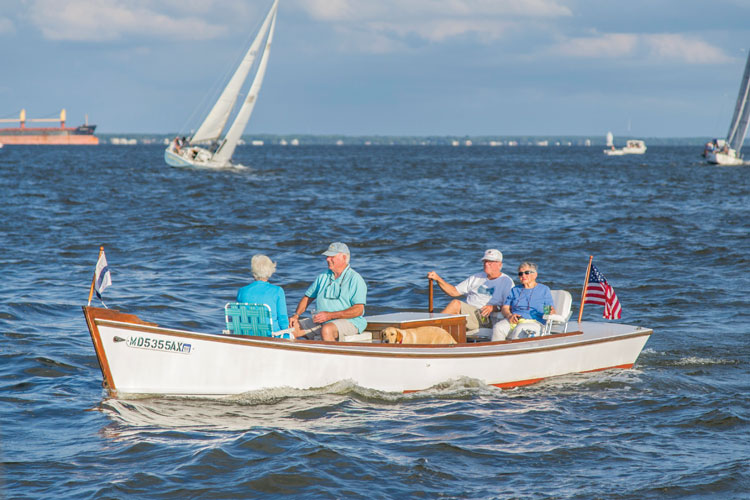 The boat was a 22-foot replica of a Smith Island crab-scraping skiff, built of Alaskan spruce in the traditional style in the early 1990s by Joe Reid, master craftsman from Mayo who is still building gorgeous wooden boats at his shop, Mast & Mallet. He made several more like ours but we had the first, built for his wife, who never forgave him for selling it.

Our aim at the time was to replace the plywood crabbing skiff we had built ourselves, eight years earlier, foolishly using inferior materials that rotted. That was a pretty boat too, but by the end you could punch a hole in it with a pencil. I wrote a cautionary tale about that experience, which ended with a plea to anyone who might know where we might find a replacement.

John Asher saw my yarn and sent a response. He had a great old crabbing boat but had just come to the sad realization that at 80 years of age he was running out of energy to give it proper care. When Gene and I laid eyes on that boat, it was love at first sight.

She was low, graceful, sturdy, shapely, sparkling with fresh paint and brightwork, and the perfect size for us. A few days later we had her launched, and the trotline was soaking. My son Will took the first run. When he dipped up a jimmy so big it wedged in the net, he did what crabbers have done since forever—he started beating the metal rim of the net against the cockpit coaming to get the crab out. Gene and I looked in horror at this affront to our gleaming mahogany.

That, I believe, was when we hatched the name. From then on she was known simply as the Gucci Boat, made for show, too pretty to work.

We went back to the want ads and found another plywood boat to crab in. The Gucci Boat was designated for service only to take the ladies to the yacht club on Sundays, or out on Wednesday nights to watch the sailboat races, or to raftups in the creeks around Annapolis, or for evening jaunts up Ego Alley on weekends, where tourists and locals alike flashed the thumbs-up. “Beautiful,” they would silently mouth, jaws agape.

Within a year or two the Gucci Boat was widely known. Folks in speedboats and sailboats would slide by us on the Severn, shouting our names. I’ll tell you something, when you get old and bald and somebody pays attention to you, it makes your day. Gene and I would gauge the success of each outing by the number of thumbs-up. “Nice night,” he’d say. “I think we got six.” 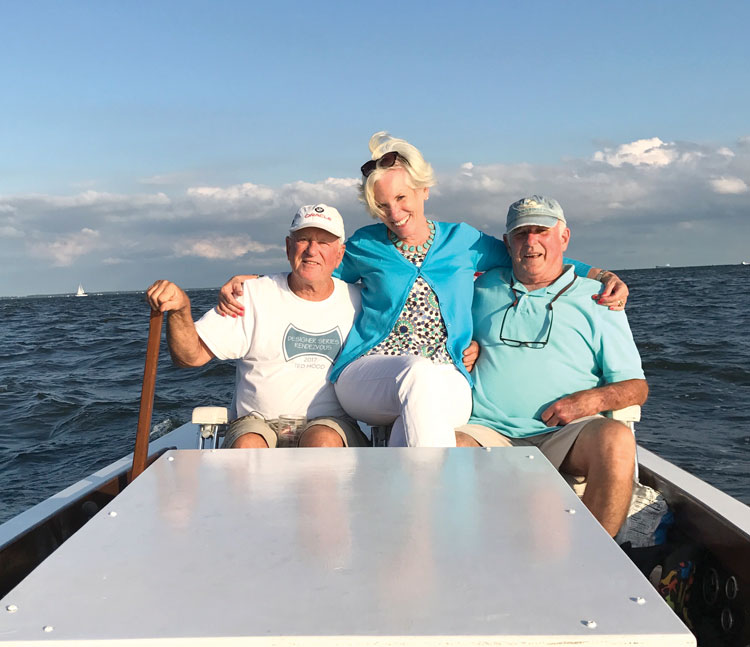 I don’t think we ever had a bad day on the Gucci Boat, but to everything there is a season. When we laid her up last fall and erected the tattered old boom tent for shelter, we knew what awaited in the spring. We’ve always done the work ourselves, and even though you think you can get away with a few patches, once you start chipping, you always end up painting most everything—hull sides, varnish, deck, and of course the bottom. Then there’s the engine and the electrics.

Gene’s birthday is in May, and last spring was a big one—he was turning 80. He didn’t look forward to crawling around under the trailer in the mud and blood with roller in hand. So we called Michael Johnson at Eastport Yacht Sales, another fan of old-fashioned things. He said he’d list it and see what happened.

As pretty and solid as she is, the Gucci Boat is wood, and there aren’t that many wooden boat-buyers around. By spring, we had a few lookers but no takers, so we went back to work. Oil and filter change, all the shiny parts off the boat and into the garage for polish or varnish (well, Cetol, but still…), chip and paint, and rebed the fittings.

We barely got her in the water by Memorial Day. Of course, once the work’s done, you don’t want to sell, but the listing was still out there, like a beacon in the wilderness.

In July, a fellow came over from Chestertown, and the Gucci Boat found a new lover. The deal was sealed quickly. We had our last outing on Wednesday, July 26, on one of the prettiest nights the Chesapeake Bay has ever seen. The Gucci Boat floated through the fleet of race boats like the swan she is, the old diesel chugging away.

On Thursday we towed her over the bridge to the Eastern Shore, where wooden, deadrise boats were conceived and once ubiquitous. She belongs to Allen Councell now, and he is no less starry-eyed than we when we brought her home that first day.

I mailed him some parts we’d forgotten to take. I texted to say they were on the way. “Funny,” he texted back, “I’m out in the backyard, just looking at her.”