About a month ago I spent a couple of days at a conference called, “Keeping History Above Water.” Sponsored by the City of Annapolis’s Weather it Together program, the event marked the second gathering of interdisciplinary practitioners focused on climate change impacts and cultural heritage preservation. Annapolis is one of 10 cities around the country participating in a Leadership in Community Resilience pilot program in partnership with the National League of Cities and the Wells Fargo Foundation. 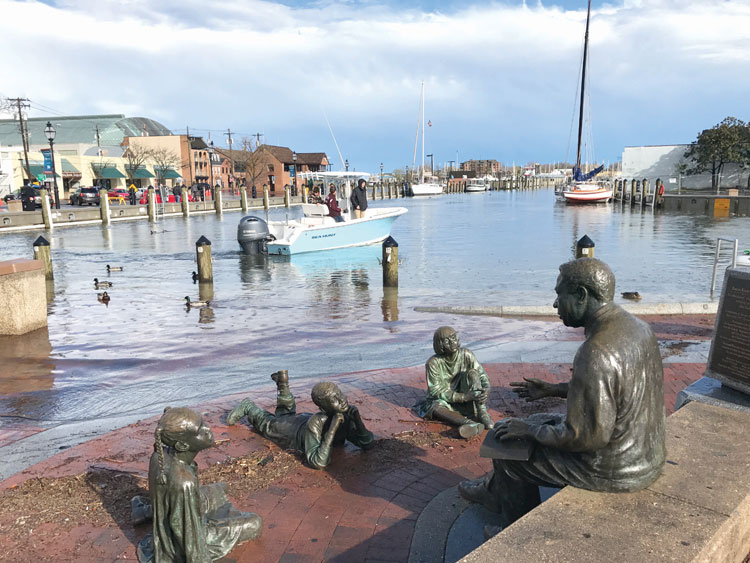 The Weather it Together team is working to find ways of protecting historic resources of a city steeped in history from the ravages of rising waters. Annapolis boasts more 18th century brick buildings than anywhere in the country, proportionate to its size, and no doubt having them as a photogenic backdrop for paddleboarders down Compromise Street only adds emphasis to the dire consequences of one flood too many. Sooner or later, buildings will succumb to water, as will streets, sidewalks, gardens and lawns, trees, electric and gas infrastructure, and water and sewer pipes.

It’s difficult to imagine anyone around the Chesapeake who hasn’t experienced in some way the effects of rising water. Even if you don’t believe in human caused global warming or climate change, storm events here in the Mid Atlantic are getting more intense, and more frequent. And not just tropical systems. A prolonged rain event in June of last year caused a torrential flood in the middle of Ellicott City.

Whether or not you call it nuisance flooding, king tides, or plain old sea level rise, coastal flooding is happening more frequently and with more inundation causing more property damage both public and private up and down the Bay. The land around the Chesapeake region is also sinking, or subsiding, due to a rebounding effect from retreating glaciers to the north in the not too distant geologic past.

The implications for Annapolis are serious and imminent. According to the Union of Concerned Scientists, the sea level here has risen a foot in the last 100 years, but has accelerated to three inches in just the last 17 years. Since 1990 the number of flood events has doubled. Inundated storefronts have suffered damage, and some have disappeared.

We sailors are always keeping a sleepy eye on the weather and where and how well our boats are tied up, but now it’s becoming more than a nuisance in more than a few places. During Hurricane Isabel and its eight-foot storm surge, sailors stayed aboard their boats in their slips only to lose their cars in marina parking lots in Bowley’s Quarters. Parts of Tilghman Island a couple of summers ago never dried out from a wet spring, and the mosquitoes were legendary. Smith Island and Crisfield suffered greatly during Hurricane Sandy in 2015. A growing swath of Dorchester County is already more water than land.

But is all lost to doom and gloom? A deeper Bay means safer waters, no? Or at least the possibility of getting through Kent Narrows with a four-foot draft once and for all. The notion of rising water lifting all boats may be apt, but once-dry Bay bottoms cause other problems. Once inhabited but now sunken Spry Island off Baltimore County is now a three-foot shoal of rocks, stumps, and snags of old pilings best avoided by the prudent mariner.

We must adapt to survive. On the water, more and more marinas and private landowners are putting in floating docks with 10-foot guide pilings to ride out the next Isabel. In Chestertown, town officials are raising the riverfront promenade by two feet, so it might stay dry more often than not. In Annapolis, the Naval Academy is floodproofing the whole facility, under the realization that it, too, will eventually succumb without the drastic measures of elevating every structure, road, and pathway. The cities of Norfolk, Chesapeake, Suffolk, and Virginia Beach have all suffered economic losses and growth challenges due to rising water.

It all seems so daunting. All our cities, towns, and villages along the Bay were built on the assumption that water levels wouldn’t change, but now we’re faced with undisputed evidence to the contrary; once-dry land sliding beneath the waves literally before our eyes. What are we going to do about it?

One answer comes from history. In the 1850s Chicago was struggling to stay afloat on the muddy prairie until George Pullman, of railroad car fame, devised a way to lift the entire city out of the mud. Using jackscrews and hundreds of workers, an entire block of Lake Street was lifted four feet in four days. Some streets were raised 10 feet, and although it took years for the sidewalks and buildings to catch up, eventually the city dried out at the new elevation, and life went on. I’m sure that given our strong collective will to preserve our past, we’ll find a way to keep it dry when the creek rises again if we put our heads together.