A Dismasting at Sea

Molto Bene's Dismasting at Sea in 2016

We were about half way to our destination, bound for the Virgin Islands. We had departed Annapolis on Wednesday, December 7, 2016, anticipating arriving in St. Thomas, USVI, about 10-12 days later, Saturday – Wednesday, December 17-21. The owners, Richard Ewing and Idarae Prothero were below, and the one crewmember, Jeff Carver was on watch in the cockpit. We heard a loud bang and Jeff immediately yelled “Rig down!
We came above to find the mast broken approximately two feet above the deck, with sails, furler, and backstay hanging over the port side. 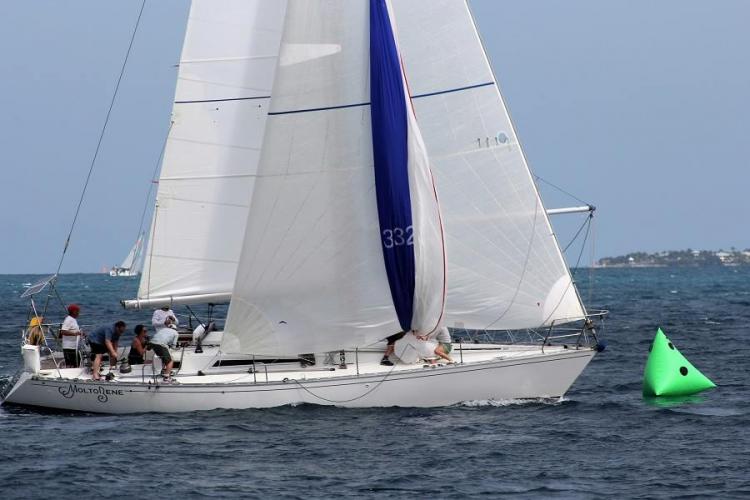 So now that you’ve heard the exciting conclusion, let me fill you in on the many twists and turns of our adventure …

We left our dock at 1420 bound for the fuel dock on Spa Creek to top off the water tanks and fuel. Molto Bene only has a 25-gallon fuel tank, and even though our Volvo engine is pretty efficient, burning approximately .75 gallon per hour, 25 gallons won’t get us far. At the fuel dock we filled our two 48-gallon water tanks and that little 25 gallon fuel tank. But because we do need more fuel for a 10-12 day passage, we lash eight jerry cans on the deck, four on each side. That’s an additional 40 gallons for a total of 65 gallons. It’s not much for a 1500-mile trip, but with careful fuel management, we’ve made it there before.

Our autopilot usually performs brilliantly! Even in the ugliest of conditions, it chugs along, so no one has to stand back there at the wheel in the elements. It doesn’t mind the rain, splashes, or cold windy gusts. (Did I mention we do not have a full enclosure on our racer/cruiser? Good news—bad news! I love looking at the stars in a clear night sky, but I don’t love the conditions described above that our autopilot will endure seemingly endlessly).

So as we were starting our journey down the Bay, and the auto pilot did a crazy Ivan, we didn’t hesitate a second to turn around and fetch a spare drive head just in case!

We left our dock for the second time about 1600. We made it to the bottom of the Bay the next morning and stopped at Cape Charles to top off water and fuel before heading for the Chesapeake Bridge-Tunnel and jumping off into the ocean.

For the next five days we sailed and motored as necessary for the wind velocity and direction and our intended course. It was a pretty typical ocean trip. We saw everything from sun to fog and clouds and rain. The winds had been somewhat steady, shifting within about 10 degrees and blowing 10-20 knots, sometimes a gust to 25 knots.

On Monday, the winds had been approximately 12-20 knots throughout the day, but the direction was clocking more southerly from 100 to 165M. We had been on port tack for days, but as the wind shift was forcing us more westerly than we wanted to go, we had done a very controlled tack earlier that afternoon. The mainsail was reduced in size by two reefs, and the 120 jib was unfurled to expose less than half. It was pretty normal ocean sailing, and we were merrily chugging along at about 6k.

When Jeff yelled, “Rig down,” Idarae was making dinner and immediately stowed the pot under the sink where it would be secure. Richard was off watch, but ran to the companionway, trying to digest what he heard. Idarae grabbed harnesses and jackets, which we donned immediately so we could go out to see what had happened. We clipped into the jack line in the cockpit to secure ourselves before progressing.

The mast was down over the port side of the boat, its top, main, and jib under water. The butt of the broken mast protruded out of the water at about a 45-degree angle, bobbing its jagged edges up and down, but attached by shrouds, spinnaker pole, boom, sails, and their sheets, halyards, and reef lines. The boom and spinnaker pole, both attached to the mast, were not in the water due to their placement on the mast. They were just inboard of the toe rail on the deck, bobbing with the mast. 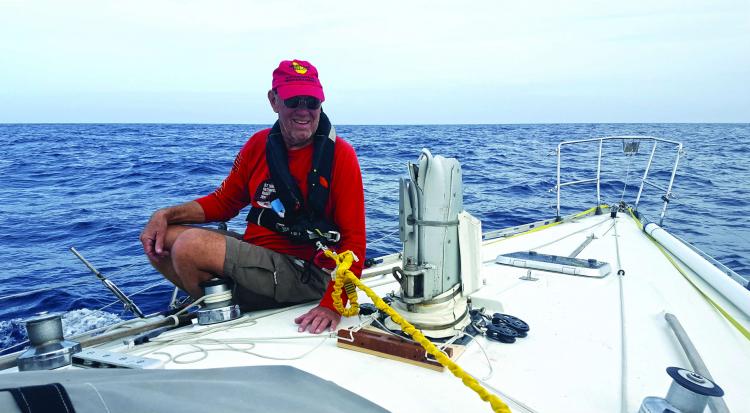 We assessed the situation and concluded the safest course of action was to cut the rig away avoiding possible further damage to the integrity of the hull and crew. We salvaged what we safely could, including the spinnaker pole and boom.

Richard started working on the leeward shrouds. They were not under load, so he managed to pull the cotter pin and clevis pin on one of them. The other two pins were not accessible under the mast and one turnbuckle was bent about 30 degrees and under pressure. So while the jagged butt danced in front of his face, he started sawing those two shrouds. It was challenging making any progress. When we dipped in a wave and the wires were exposed, he’d saw. Then the boat would climb a wave and the mast would move, blocking access to the wires.

When the mast fell, it flattened the stanchions and lifelines. With no shrouds to grab and no life lines to keep you on the boat, one of the huge challenges facing us was finding a way to stay on a bucking boat with nothing to hang onto. It was imperative to use our tethers to insure we remained on board.

Jeff realized that the boat was meandering in the seas, and the wheel was turning from stop to stop. He tied the wheel to prevent the rudder from banging back and forth.

We got more tools—vise-grips, crescent wrench, hammer, and knives—and set to work on the forestay while Jeff worked on the backstay. Jeff was lucky enough to pull the pin on the backstay to free it. The forestay was a little more complicated. There were two link plates that attach the roller furler drum to the forestay toggle at the bow with a pin. That pin has a nylock nut on each end: a struggle to remove, but easy enough. But that pin also is bigger, i.e. “shouldered,” in the middle to maintain the proper space between the plates. So that pin can’t be simply pounded through. Richard eventually bent one of the plates enough to clear the end of the pin. If that hadn’t worked, we would have had to saw through rolled up sail, furler tube, and eventually the forestay wire.

The forestay wrestling match resulted in the only real injury anyone incurred (short of broken nails and cuts and bruises - that’s just sailing…). The forestay, with the bottom of the jib rolled on it, was draped over the bow pulpit. Again, every time the boat dipped into a swell, the forestay sagged inside the bow pulpit. Richard was supporting himself against the pulpit when the forestay sagged, pinching his upper arm. He had a bruise from his armpit to his elbow and a blood blister almost two inches in diameter.

I went to the reef lines that Richard had just installed during the summer. New hi-tech amsteel rope is very stiff and very strong. It was really tough sawing through the fibers and took what seemed like forever! 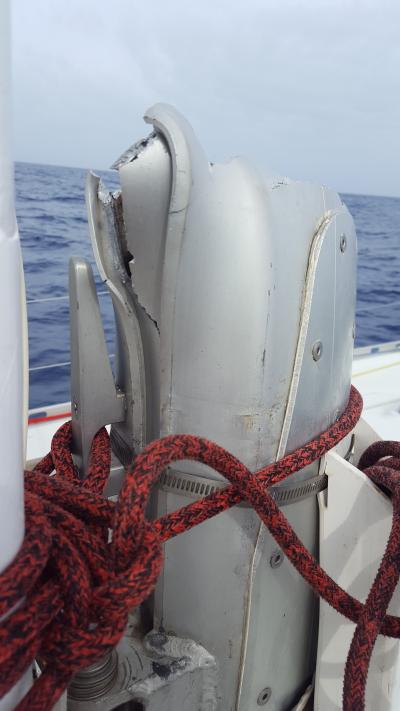 Richard next set after saving the boom. He too had the challenge of cutting the amsteel reef lines from the front. Then he got the nut off the goose neck bolt and started to pull it out. Jeff was very safety conscious and concerned about the results of any action. We did our best to coordinate every action, every cut and release. Action – reaction? So when Richard had the bolt half way out, Jeff stated his concern about that freeing the bucking mast enough to do some real damage to the hull, and maybe even the keel or rudder. So Richard stopped. In the meantime, Jeff got the pin out of the second to last shroud on starboard. That did loose the serpent and the weight of the mast started to move it to a more vertical position. Somewhere in that motion, the partly pulled pin in the boom goose neck bent.

Richard sawed the final shroud. It was under sufficient load that the wire unraveled as he sawed. That was it though and as the mast slowly started to sink, we were worried about that bent bolt in the goose neck. Richard told Jeff to cut the tack of the loose-footed main, but he didn’t have to because the cast ear on the mast broke and the entire rig: forestay, jib, roller furler, main sail, backstay with SSB antenna built in, halyards, sheets, and mast ever so slowly sank into 17,400 feet of the Atlantic Ocean.

It was like slow motion as the sails seemed to flutter and float, but the heavy mast weighed it deeper and deeper. We were awed watching it, but were thinking, “Sink already! Get away from the boat – SINK!”

Click here to read Part Two and see video of the event.