Relaunch of the Last Working Oyster Boat, the Edna Lockwood

On a cold, wet, and windy October 27, Edna Lockwood, the last working oyster boat of her kind, was relaunched into the Miles River at the Chesapeake Bay Maritime Museum (CBMM) in St. Michaels, MD.

When the oyster dredge was introduced to the Chesapeake in the early 1800s, the need for a new type of workboat soon became obvious. The dredge, a steel cage with teeth at its edge, was dragged along the bottom until it filled with oysters and was then hauled up to the surface. Chesapeake watermen had harvested oysters from small boats such as log canoes and skiffs, using hand tongs called nippers, since colonial times. Hand tongs were difficult to use in water more than about 25 feet deep. The oyster dredge, on the other hand, worked well in deep water. One pass with a dredge, called a lick, could produce a much larger harvest than tonging. The dredge was heavy and required a more powerful vessel to drag and raise it. 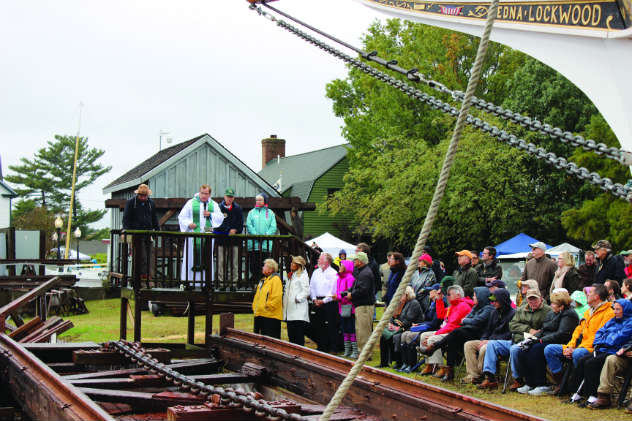 Chesapeake boat builders began experimenting and building larger vessels using the tried and true technique used to build log canoes. Most log canoes, the literal descendants of the dugouts used by native peoples, were small boats, their bottoms made of five or seven logs, fastened together and shaped by ‘chunking,’ a process involving chopping the logs away until the desired shape was obtained. Frames or ribs were then fastened to the logs and used to construct the sides of the hull.

A larger version of this construction technique produced a hull with a nine log bottom about twice the length of a log canoe. These larger relatives of the canoe were first called Three Sail Bateaus, but sometime in the 19th century the modern name Bugeye appeared. Bugeyes were built to harvest oysters. The hull was beamy to carry the large harvest and provide room to work the ‘winders’ that controlled the dredges. Low freeboard to make boarding the harvest easier, a centerboard, and two permanent masts each flying a powerful modified Leg O’ Mutton sail and the traditional Chesapeake ‘Long Head’ completed the boat. 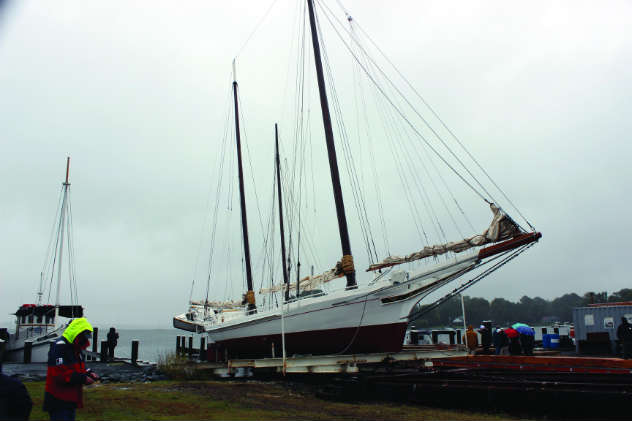 Edna Lockwood was built on Tilghman Island in 1889, during the peak of the commercial oyster boom. She spent winters ‘drudging’ (dredging) oysters and summers hauling freight, mostly out of Cambridge, MD. Edna worked for more than a half dozen owners over nearly 70 years until she was retired in 1966, partially restored, and operated as a yacht. In 1973 owner John R. Kimberly donated her to CBMM. She was declared a National Historic Landmark in 1994.

At the ceremony celebrating Edna’s relaunching, museum president Kristen Greenaway welcomed the several hundred attendees. She also explained that the newly restored bugeye will go on a National Park Service funded heritage tour of the Bay during the summer of 2019.

CBMM chief curator Pete Lesher briefly outlined the boat’s history and pointed out that Edna was the last log-bottomed bugeye still sailing anywhere in the world. Shipyard manager Michael Gorman outlined the four-year process of research, relearning old techniques, and careful restoration required to bring the boat to her current pristine condition. Reverend Kevin Cross provided the traditional blessing of the boat and all who sail in her. Then, after the time-honored champagne christening, Edna Lockwood began the slow trip down the railway to the waters of the Miles River.

After all the speeches and the blessing, as Edna finally floated free from the railway cradle, her bow dipped and she seemed to nod her head. Perhaps the 130-year-old grand old lady was acknowledging the cheers of the crowd of well-wishers, the salutes of the St. Michaels fire boat, and the cannon on Navy Point.