The First Sock Burning circa 1977

The First Sailor's Sock Burning circa 1977

Based on years of hearing the legend of sock burning, told a bit differently by salty Eastport sailors, here’s SpinSheet editor Molly Winans’s imagining of it. This first appeared as “The Urge To Burn” in the March 2012 SpinSheet…

Bob was tired. It hadn’t been just a long day; it had been a long week, a long month, and a long, icy winter. Although the thaw was well underway, memories from the winter were vivid—from the first glimpse of a seagull standing on December’s skim ice to the dreariest days, when the cracked ice on the harbor resembled a barren map of the world.

He had seen worse winters, or so he had said. Quietly, he wondered if he really had seen worse on the Chesapeake. He had certainly lived through mild winters, the ones during which they barely used a space heater in the shop and you might have forgotten where your gloves were. Winters when you couldn’t remember if it had snowed even once. Not this year. He was happy to bid this bitter season farewell. 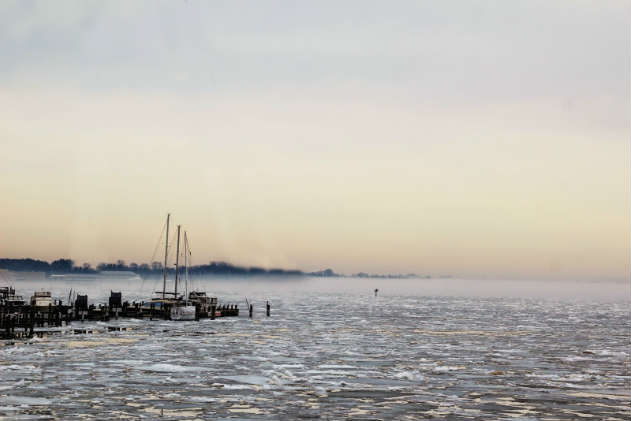 March was always a back-bruiser of a month. Funny how some people assumed he wasn’t busy at the boatyard yet, because it wasn’t yet full-fledged, daffodil-sniffing, sunshiny, let’s-go-sailing time. Not busy. Huh. Did they think all the sailboats that motored out of the creek on April 15 just commissioned and splashed themselves?

They would say, “Look at the shiny sailboat!” Did they think she sanded, scrubbed, waxed, and painted herself? Forget trying to explain servicing the stuff under the waterline or down below. Someone who thought he wasn’t busy yet in March didn’t know anything about boats.

Forget April. If he thought his knees and back were sore on today’s spring equinox, wait until the procrastinator crowd started to nip at his ankles. They were the worst; the ones who showed up late and wanted to have their boats done early. They would ask, “Can you finish the boat by this weekend? It’s supposed to be nice out.” It was as if they woke up and remembered, “Oh, yeah, I have a boat. I want to go sailing.”

They might have set up an appointment in late winter, but no, they waited until April, which comes around one day after the lamb-like end of March, every year, and goes out in flip-flop style. The procrastinators were tough. “We’re doing our best,” he would tell them. It was true.

What a day. He sighed and realized that following the drizzly, 48-degree early afternoon, it had cleared up and warmed up. He had seen an osprey, right on schedule on St. Patrick’s Day, so he had known spring was coming.

Here at the end of the busy work day, he felt spring nearing, suddenly, as if he had just heard a few notes of a favorite song he hadn’t heard for a long time. He smiled and did what any sailor may do. He checked to see if there were any Budweisers in the shop fridge. And, yes. There were. 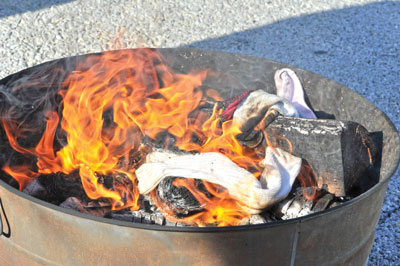 As he cracked a beer, he glimpsed his filthy hands and knew there wasn’t a brush in the house that could scrub away what encased his fingernails. He felt grimy all over. His feet were hot and itchy, just plain nasty, in his work boots.

A dried paint tray, on its side by the garbage can, inspired him. An old desire sneaked in like a devilish teenager and tapped him on the shoulder, as old desires do in spring. He took the tray, an ideal, safe fire pit, if you think about it, and carried it down by the water. Despite the lack of breeze, his little rag fire stoked easily.

He sat on a log, now with a curious audience of co-workers around the little fire, and removed his boots. He peeled off his damp and foul socks, one by one. He wiggled his white toes in the cool evening air. With a subtle smile, he stood up and stepped over his worn boots, feeling the pointy chill of gravel on his moist bare feet.

And the socks? Bob burned them, one by one. A spring tradition was born.

PARTICIPATE IN SPINSHEET'S VIRTUAL SOCK BURNING 2020! WE CAN BE SAILORS ALONE TOGETHER!!