Two major topics this season have dominated the chit-chat at the marina where I keep my boat: 1) Boy, the weather this year is sure better than last year, huh?... 2) What’s up with all of the #@^&% spiders?

What’s up indeed. I do not survey the arachnid population on my boat every year, but there is no question that there are more this year than I have seen in the 10 years I’ve owned the boat. It’s not that surprising when you think about it; we’ve gotten our share (and then some ) of rain over the past few years, and more rain equals more bugs. 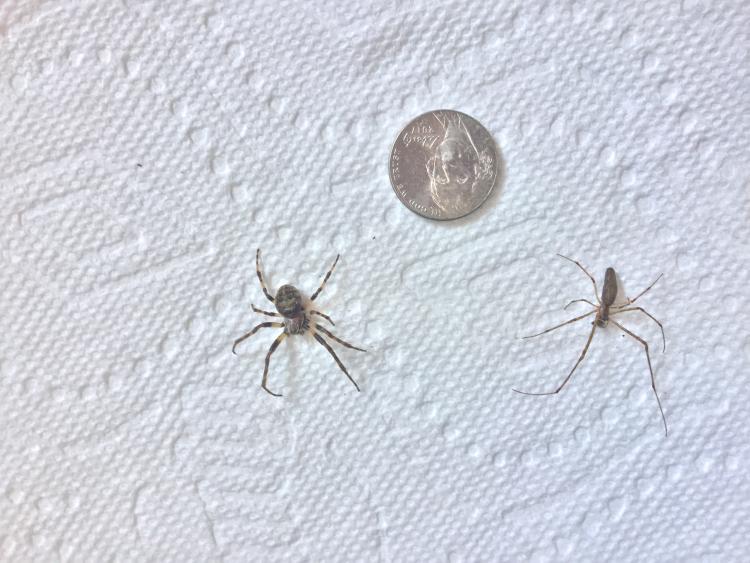 More bugs means more food for the spiders, and so they make more little spiders. Also, it does not help that my marina is in a particularly idyllic location, set at the border of a marsh teeming with muskrats, wildflowers and other wildlife. In there, there are a few spiders, and a lot of them decide (like we human sailors) to live aboard.

It’s not talked about much, but for spiders, a sailboat is just about the perfect manmade habitat. Shrouds, stays, lifelines, and stanchions provide the perfect anchoring points for building webs.  There are plenty of cracks and crevices to hide out during the day, particularly on an old boat like mine. Finally, since boats move around, our little eight-legged friends get exposed to a widely varying diet. All in all, it’s a pretty great deal for them.

Up until this year, the spiders onboard my boat have never bothered me too much. Yes, they leave their webs on the boat and it’s no fun to walk into one, but in the plus column, they eat mosquitoes. Any creature that eats those blood-suckers is a friend of mine.

Plus, although many of us are quite proud of our accomplishments in the marlinspike arts,  none of us can approach the skill level of the spider. Every night they build a web of uncommon beauty, and if you pause to watch them work, they do it quickly, with no hesitation or mistakes. They are the original master-riggers. The two facts that they’ve been around for at least 380 million years and that they eat all sorts of insect pests make them fascinating, at least in small doses.

But, even an arachnid admirer like me has his limits. For me, that limit was reached on July 6. My wife and I were down at the boat early that morning. We planned to do a little sailing and then head over to Fairlee Creek and wile the day away on the water anchored out until the fireworks show that evening. Our friends Tim and Trish were planning to raft up with us later that day. The day was bright, sunny—and full of spiders.

Setting up the bimini, an easy dozen spiders of all shapes fell out of the cover onto my cockpit cushions. More appeared as I hosed off the decks. Taking the mainsail cover off, 10 or 15 of my little friends dropped out onto the deck. The dock lines were just covered with webs.

“I’m sick of all these damn spiders.” I grumbled to my wife.

My wife (not known for her love of creatures with more than four legs) said immediately, “We should spray something.”

“Maybe.” I said, but I was dubious that spraying would work. Apart from environmental considerations,  the first rain would wash everything away. Then, there was the pesticide’s  unknown effects on all my mostly-new canvas. No, I thought, that is probably not the solution.

I brought the subject up later that day to my friend Tim, while brushing a few strands of spiderweb off the bimini frame.

“What I do,” he said, in between sips of a painkiller, “is wait until nightfall. I go out with a flashlight and a towel, and I squish every spider I see. It keeps them down to a reasonable level.”

“Well, that’s an idea worth trying,” I thought, “I will do that tonight, after the fireworks”.

After the fireworks (and after the line squall that went through the anchorage, which is a story in its own right), I set to work on the Great Spider Massacre of 2019. Armed with a flashlight and a couple of wadded-up paper towels, I began. After about an hour, I estimate that I “removed” (in a permanent way) about 45-50 of my arachnid hangers-on. The bodies were buried at sea (by which I mean that I shook the paper towels out periodically overboard). There was no formal ceremony, although I was muttering “Sorry, guys” under my breath the whole time, which counts for something, I guess.

If you plan to try this on your own boat, be aware of a couple of things. One, you can’t just throw spiders overboard without the squishing step. Spiders can throw out lifelines on demand, and they will attach themselves to your boat and climb right back on. Secondly, they are surprisingly hard to squish; a lot of them lived through my first efforts, and more than a few escaped.

Finally, spider guts are pretty gross; if you are very squeamish, you might want to 1) get your spouse, partner, or (even better) your teenagers to do it, or 2) wear gloves. Gloves are probably a good idea, because there is a risk you could be bitten, although that did not happen to me. Option one is a no-go for me, as there is not enough jewelry in the world to get my bride to voluntarily come within three feet of a spider.

Did it work? Yes. I noticed a definite decrease in webs/dead bugs on deck over the next few weekends, and it no longer rains spiders when I set up my bimini. Although I am sure more spiders will eventually move in (unless my boat get a reputation for being a bad neighborhood), this does not seem to be a quick process, at least this time of year.

The more important question is, do I feel any remorse about smashing all of these creatures which I claim to find fascinating? The answer, honestly, is no. As cool as they are, the boat spiders took advantage of my hospitality, lounging around during the day, leaving my topsides cluttered with bug bodies (the spider equivalent of beer cans), and inviting all of their loser friends aboard. It’s a lot like having your college-age kids come home for Christmas break. You miss them and are glad to see them, but after three days of watching them do nothing more than  lie on the couch, watch Netflix, and consume a week’s worth of groceries in a day and a half, you want to squish them. For that, you’ll need a really big towel.

Notes on the Author: Mike Fossler is a pharmacist and clinical pharmacologist who sails his O’Day 272, Pana-Sea-A, out of Worton Creek with his wife, Robanne, who does not share his admiration for spiders.