It’s not a yellow submarine. But it can theoretically be submerged and remain unharmed. Why would such an attribute be necessary? In its former life, before two British architects, Guylee Simmonds and David Schnabel repurposed it, this unsinkable boat was a lifeboat that could fit 100 people. Its original home was dangling off the side of a Scottish Ferry where it awaited its moment of glory as a savior. 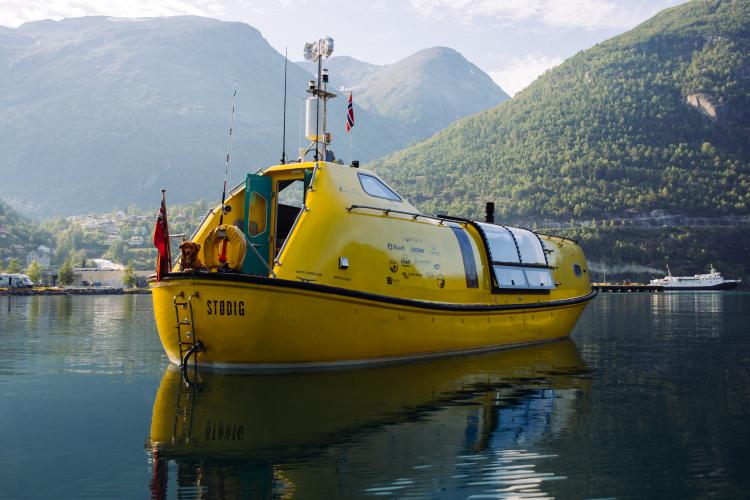 But when it was decommissioned, Guylee and David had another vision for the boat. In its new life, it’s a houseboat, or more accurately, an adventure vessel that explores the high cliffs and deep waters of the Norwegian Artic, with all the comforts of home.

“We wanted to experience a range of different cultures, different approaches to living by the sea, different landscapes, different climates. And if you are creating an expedition boat that will take you 3100 miles up the Norwegian coast, your concerns include a bit more of the finer things in life.”

Some of the finer questions which moored themselves in Guylee’s mind: “Where would we fish from? Where could we barbecue the fish?” And above all things, when they got to a sunny anchorage, “Where could we sit for that evening beer with Shackleton?” Guylee is not referring to Ernest Shackleton the famous nineteenth century Arctic explorer, but his namesake, a Nova Scotia Retriever and a full member of the crew. 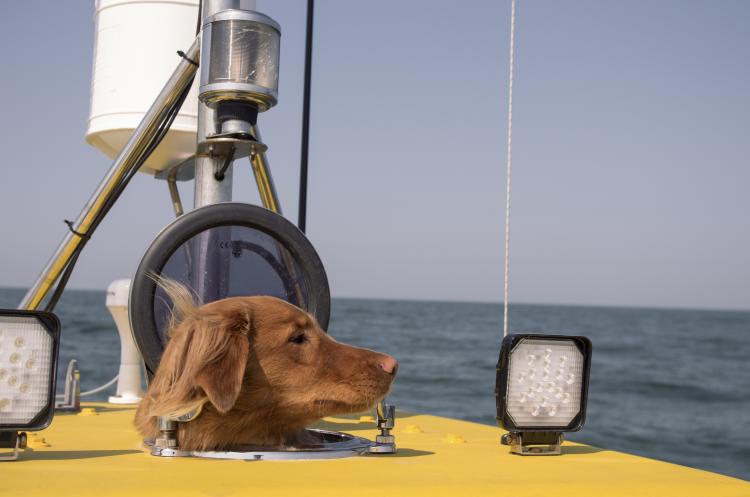 The answer to Guylee’s worthy questions was to cut into the back of the boat to create a deck. “The feeling of cutting a huge opening in something we’d only recently purchased with basically our lives savings, was pretty nerve-wracking. Hopefully it is the only big hole we ever make in the boat.”

The thinking the architects applied to the throughout the whole project was informed by the buildings they’d designed. They wanted to capture the views and bring the outside in, and given that they were headed to the Artic, they also wanted to keep the outside out. Their aim was to design a boat that would allow them, “to live comfortably and always be a great place to come back to.” As David explained, “We wanted to be able to go on a big hike with Shackleton, or swim in the fjords or go skiing in the winter and come back to a warm, comfortable space where we could have a hot shower and also dry our gear off.” 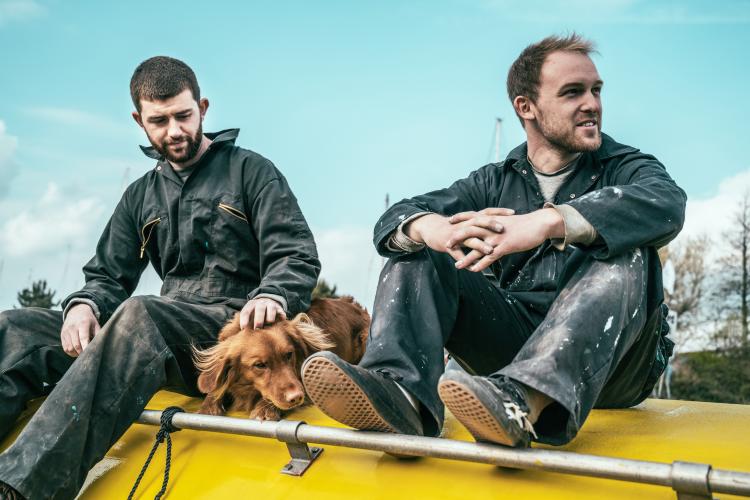 “We made a wood burner the focal point of the space, because when it gets cold in the Artic you want a nice, generous source of heat. We wanted a sociable living space.” They built a seating area that faced a friendly-sized kitchen. The also had a large bathroom, two staterooms and two bunk beds for guests.

The windows are a key feature. David and Guylee describe it this way: “We have an incredibly light living space with big panoramic views out either side of the boat. It allows us to experience the majesty of the fjords and the mountains in a way that you rarely ever get to inside of another boat.” They built the windows themselves, including the drawings and templates. They admitted that the windows, unusual for a boat, were the most stressful part of the build. The windows afforded an expansive view, but also an expensive one. The work needed to be precise to design to match the curve of the boat. So, they started from the basics. 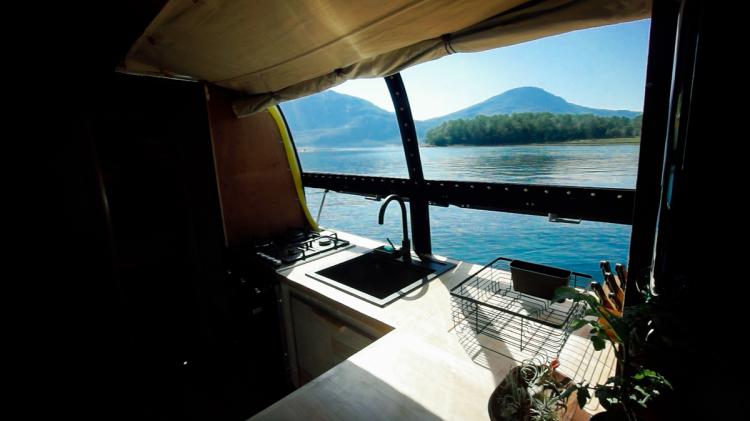 “We were focused on how to let light in, keep water out, and not let the interior get too hot.” They decided to have the lower section open and close for ventilation on demand. They used more rubber gaskets than they could count to keep the water and weather out. And they integrated blinds directly into the design for privacy.

They knew the vessel would create quite a stir wherever they went, so the interior design was also about creating personal spaces. David explained, “When you are sitting in the main space it’s fantastic to have great views out the side, but when we are in a public area, like a marina, people are obviously interested in the boat and they look in to see what it is because it’s so interesting and different.”

When the boat is docked, curious passersby can look into the main area, but not the cabins. “It’s nice to be able to retreat into your bedroom as a private area you can’t see in from the outside,” David says. “We have two very comfortable cabins each with a small port hole out over the water. We didn’t want a lot of light in because we are taking it up to the Artic where, in the summer, the sun doesn’t set. And we wanted to be able to close ourselves in.”

The other creature comforts include a kitchen that, David says proudly, is “twice the size that you would normally find on this sized boat.” The kitchen also sports a large sink, lots of counter space, a 150-liter fridge and a domestic-size oven. 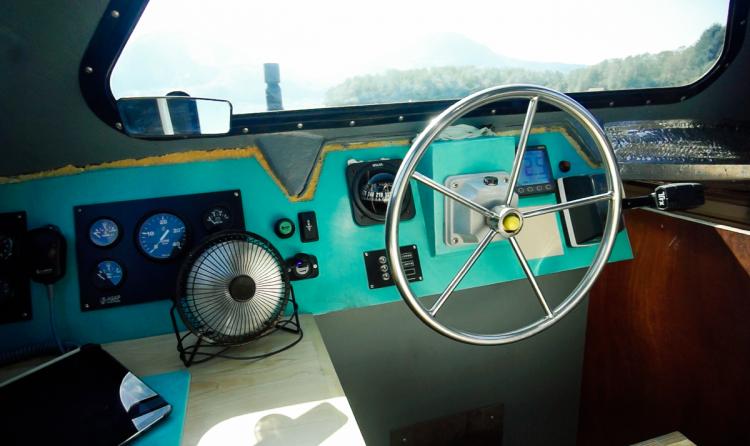 Long stretches off the grid

They have a solar-powered system that fuels their lifestyle and gives them the freedom to live for long stretches totally off the grid. “Not having to think about the amount of electricity we have is one less thing to worry about on the boat. Today is day 67 and we have plugged in just four times.  We’ve been totally self-sufficient.”

The boat has 900 watts of solar power and two 12-volt batteries on board. One battery is for the engine starter and cruising, navigation, and winches. It’s 165 amp hours. The other battery is the domestic bank, and is 660 amp hours. The domestic bank handles the refrigerator, the composting toilet, the toaster, the kettle, the power tools, and their lap tops all day long. 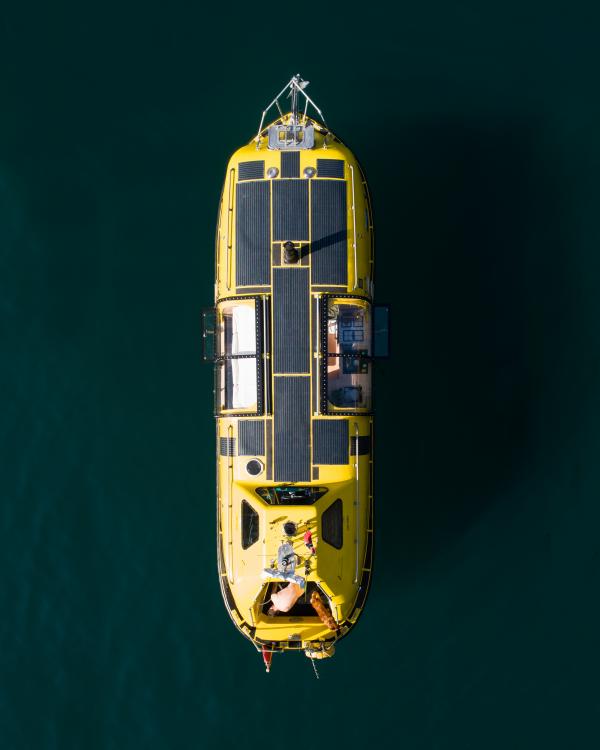 Not having to worry about how regularly they go into a marina to charge up batteries is a gift.  “We’ve been able to keep our batteries topped off even in low light,” David says. They also have a small wind turbine, and they can get some electric from the diesel engine if needed. “So, most time when we get to shore we don’t even plug in. When we are at anchorage, totally off grid, that’s when life is best on the boat. Everything works as it should and you have the benefits of remoteness and the beautiful views.”

“The main appeal of the Sunflare solar system,” David adds, “was that the panels were flexible, and they looked very smart. They look better than a lot of the other products we’d come across. And as discerning architects, that was very important to us. Especially having such a dominant visual impact on the boat. We wanted them to fit as seamlessly as they could.”

“I like that fact that flexible meant flexible,” David says. “Trying to fit other modules from other manufacturers on the roof, I’d always come across situations where the panel was marketed as being flexible but only flexible in one direction. Or only over a drop off of a certain distance, and when it came to the steeper, more curved parts of the boat, it just made life a lot more difficult. 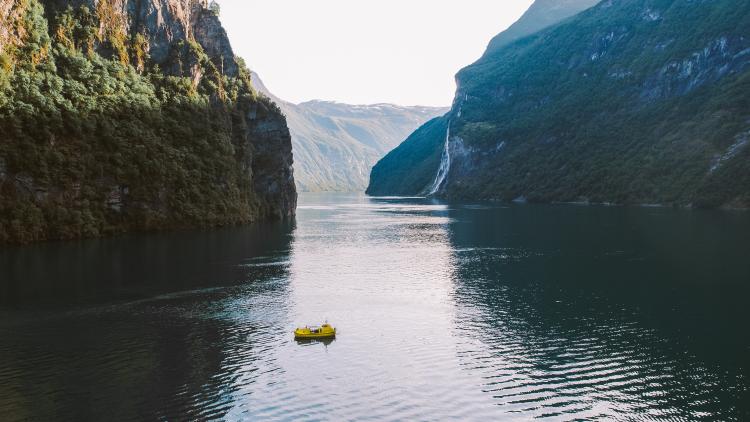 Guylee jumps back in. “With a lot of the other products we looked at there were so many ifs and buts. You had a lot of constraints in terms of the size of the panels or how well they could curve. And in terms of the outputs you could achieve. And often, in terms of how good they looked as well. With Sunflare, we have none of those constraints. The panels totally transform the look of the boat. We always wanted the boat to be a contrast of a of a very utilitarian functional exterior versus a homey, modern interior and the panels only add to that. They work perfectly.

“And we were very grateful how straightforward the installation process was when we had so many other things to finish. Considering how long a lot of things took on the boat, you know we spent weeks doing fairly minor tasks, like building lockers underneath the floor, things that we felt should go so fast, but didn't. The solar panels were really straightforward. We thought that might take a lot longer and it took a matter of two or three days, max. That was including all the extra sealing we did around the edges.”

Adding the solar also transformed the build in the last few weeks. “We were never actually in a position in our boat yard to plug into shore power easily, and suddenly being able to plug the fridge in and start charging our phones and our power tools was quite transformational,” David says. 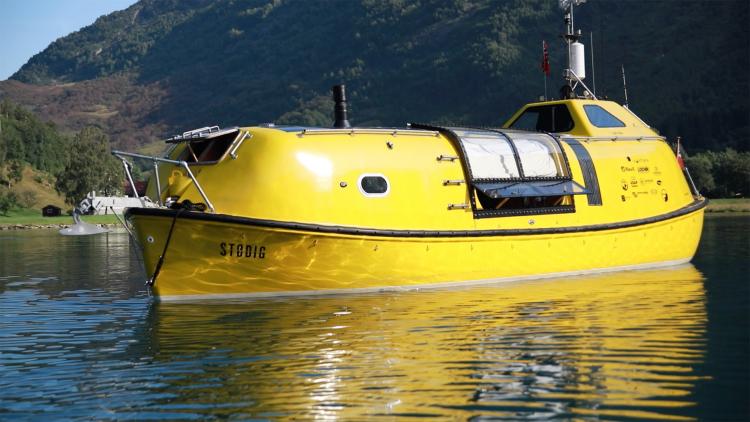 Now that they are out on the water, the panels don’t inhibit any use of the boat. “We can still go up on the roof and use that space for inflating dinghy’s and getting to the bow for anchoring and mooring. And sometimes we just sit up there for a meal. The panels allow us to live in harmony with the boat,” David says. “Plus, Sunflare modules are much more environmentally friendly than other solar panels.  Everything that we tried to do on the boat, we’ve tried to do in as green a way as we can.”

The first excursion will take four months… more or less. The trip has already grown from about 2200 miles to 3100 miles.

“That’s part of the joy of our trip,” David explains. “We had a schedule, a plan of where we wanted to go, but we are taking it as it comes. We wait to see what’s around the next headland. We can choose to spend as much or as little time as we want. And that’s a nice way of living. We live in harmony with the weather and the sea and the boat itself and that’s definitely quite a change from the lifestyles that we left. The journey is about taking it slow and living life at a slightly different pace.”

But the architects haven’t left their work behind. They just have a better office now. It’s hard to disagree when Guylee says, “I’m pretty sure we have one of the best offices in the world with our constantly changing views.”

A few statistics on their new office…

Their view changes at about six knots, which is the pace of the boat. That rate of speed may be one reason they named their vessel Stodig, Norwegian for steady.  Luckily, Stodig has ample space. The boat is 33 feet long, 3.5 feet wide with about 6.5 feet of headroom (and more in the stand in the wheelhouse.) It was built in Norway in 1997 and is powered by the original 3-cylinder Lister Petter diesel engine. It weighs about 5 tons empty, and 12 tons full of people.

The fiberglass of the Stodig is twice as thick as a normal pleasure boat. It was designed to withstand such extreme conditions that it had to pass a test of swinging against a concrete wall at 22 feet per second. If it were slammed against the side of a ferry by a storm, the raging winds wouldn’t damage it.

Obviously, the architects don’t expect to ever hit a concrete wall at that speed, but they say the strength does afford additional confidence when they anchor up against cliff faces.  And, of course, when out in the open waters. Stodig is built to survive strong seas.  The manufacturer says the vessel is unsinkable.  When fully sealed, the boat is supposed to be able to roll over and roll back up to the surface.

“We often get asked, can the boat rollover and then right itself? The answer is that we hope we don’t have to test it. But in theory, yes.”